The United States leads the world in the generation of plastic waste and needs a comprehensive strategy by the end of next year to curb its devastating impacts on ocean health, marine wildlife and communities, a new report from the National Academies of Sciences, Engineering, and Medicine concludes.

A committee of academic experts who wrote the report at the request of Congress described an environmental crisis that will only get worse as plastic production, nearly all from fossil fuels, continues to soar.

In fact, the first of the study’s main recommendations is to stop making so much plastic—especially plastic materials that are not reusable or practically recyclable. It suggested a national cap on virgin plastic production among other strategies, all of which the report concluded will be needed to control pollution from plastics and all of the related health and environmental issues.

“The fundamental problem here is that plastics are accumulating in the natural environment, including the ocean,” Margaret Spring, chief conservation and science officer at Monterey Bay Aquarium in California, who chaired the report committee, said in a telephone interview on Wednesday.

She called plastics “pervasive and persistent environmental contaminants,” creating a problem that is “going to continue unless we change—we have to change. And that’s just the truth.”

The report, made public Wednesday, is historically significant, said Judith Enck, a former Environmental Protection Agency regional administrator and president of Beyond Plastic, an environmental group.

“It is an outstanding report that every member of Congress should read and act on,” Enck said. “It’s timely. It’s transformative and it’s based on science. It will be quoted for years to come.”

A leading industry lobby group for the plastics industry, the American Chemistry Council, agreed in a statement that a national plastics strategy is necessary.

But the association, whose members include chemical companies that produce plastics, called the recommendation to restrict certain kinds of plastic manufacturing “misguided.”

Congress included $350 million for recycling in the recently passed $1.2 trillion bipartisan infrastructure bill, but lawmakers remained divided over comprehensive plastics reform, with those aligned with industry championing “advanced recycling” and progressives promoting several policies including one banning single-use plastics and another making producers of packaging manage and finance waste and recycling programs.

The report, “Reckoning with the U.S Role in Global Ocean Plastic Waste,” described the “20th century miracle invention of plastics” but said that miracle had also “produced a global scale deluge of plastic waste seemingly everywhere we look.”

Coastlines, including sandy beaches, rocky shorelines, and estuarine and wetland environments, are inundated with plastic waste, the report said. In 2019, an international cleanup collected more than 32 million individual items (cigarette filters, food wrappers, beverage bottles and cans, bags, bottle caps and straws, for example), from more than 24,000 miles of beaches around the globe.

Plastic debris can be found from the sea surface to the seafloor and has been ingested by tiny microorganisms, like plankton, and the largest mammals on Earth, whales, the report said. It estimated that 8 million metric tons of plastic waste enter the world’s ocean each year—the equivalent of a full garbage truck every minute. At that rate, the amount of plastics discharged into the ocean could reach up to 53 million metric tons per year by 2030, or roughly half of the total weight of fish caught from the ocean annually, the report found.

The committee was asked to estimate the U.S. contribution to global ocean plastic waste, including both plastics produced in the U.S. and plastics made elsewhere that enter U.S. waste streams. But that, its members found, was difficult to do, because of gaps in data, monitoring and reporting under existing federal law.

To address the information gap, the report recommends the government establish a nationally coordinated and expanded monitoring system to track plastic pollution and measure progress to reduce it.

However, the committee was able to conclude that while only 4.3 percent of the world’s population lives in the United States, the nation was the top generator of plastic waste, producing 42 million metric tons in 2016, with per person plastic waste generation at 287 pounds.

One of the problems is that plastic producers are not doing enough to make sure their products are made to be easily recycled, said Spring, a former top official with the National Oceanic and Atmospheric Administration.

“Basically, it’s somebody else’s problem, it just gets passed down the line,” she said, noting that the problem was made more complex by the varied nature of different types of plastics.

“And you’re seeing that the solid waste management system is pretty much overwhelmed by not being able to handle all of the very disparate types of plastics that are being made, whether it’s film, or whether it’s bottles, jars,” she said. “There’s all sorts of different products, all different colors, different additives for different purposes.”

The report noted that of plastic in municipal solid waste in 2018, three quarters was sent to landfills and only 9 percent was recycled, with the remainder burned to produce energy.

The report made mention of “advanced recycling,” where plastics are broken down on a molecular level by chemicals or heat to become feedstock for other products. Industry is keen on the development of this technology and maintains it will be a key part of what is sometimes called a circular economy, where waste is eliminated and resources are circulated.

In response to the report, the American Chemistry Council said that since 2017, more than $7.5 billion in what it called “advanced recycling projects” have been announced or are already operating, with the potential to recycle 11.7 billion pounds of plastic waste.

But the major goal of chemical recycling is to take plastic waste and use it to make other plastics of the same or higher quality, the report’s authors noted. And that goal remains elusive.

“Such processes remain unproven to handle the current plastic waste stream and existing high production plastics,” the report found. Right now, the only forms of chemical recycling in the United States exist at small scale and “are energy-intensive” processes “whose primary products are fuel and other chemical products,” rather than new plastics.

Environmental advocates find the industry’s touting of “advanced recycling” a form of greenwashing—making an official stance seem more environmentally friendly than it actually is—and say it is  continuing the nation’s reliance on fossil fuels.

Enck said the report has major implications for policy discussions about climate change and environmental justice. It supports much of what the environmental community has been saying for years, she added.

“When you reduce plastics production, there are less air toxins and greenhouse gases,” often emitted in or near communities of color or low income, she said. Poor plastics recycling rates means more waste is going to landfills or incinerators, which also tend to be in the same communities, she added.

While the U.S. has passed landmark environmental protection laws since the 1970s to address hazardous waste and toxic water and air pollution, Congress has not targeted widespread plastic waste, the report found.

Among its other recommendations, the report said the U.S. needs to:

The report will be forwarded to Congress and Biden administration officials, Spring said.

“I hope Congress will review it, and respond and give us some feedback,” she said. “So we look forward to future conversations about what this might mean, for Congress and the administration. It was our best effort to answer the questions we were asked.” 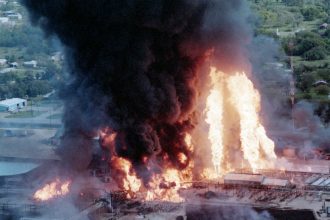