The nation’s largest electric grid operator, PJM Interconnection, is so clogged with requests from energy developers seeking connections to its  regional transmission network in the eastern United States that it is proposing a two-year pause on reviewing more than 1,200 energy projects, most of them solar power.

New projects may have to wait even longer.

The situation can be explained in part by the rapid increase in the economic competitiveness of solar power as state energy policies and corporate sustainability plans drive a booming renewable energy industry. But the logjam threatens to put some solar developers in a financial bind and is raising questions about the feasibility of the Biden administration’s goal of having a carbon-free electricity grid in just 13 years.

“It’s a kink in the system,” said Adam Edelen, a former Kentucky state auditor who runs a company working to bring solar projects and jobs to ailing coal communities in Appalachia, including West Virginia, Pennsylvania, Ohio, Virginia and Kentucky. “Anyone paying attention would acknowledge that this has a tremendous impact on climate policy and energy policy in the United States.”

The backlog at PJM is a major concern for renewable energy companies and clean energy advocates, even though grid operators are a part of the energy economy that is largely unknown to the public.

“There is broad national consensus, in the leadership from the public and the private sector, that we need to hasten the adoption of renewable energy,” Edelen said. “The planet does not have time for a delay.”

PJM, a nonprofit, operates a competitive market for wholesale electricity in all or part of 13 states and the District of Columbia, including Pennsylvania, West Virginia and Kentucky—but one without a lot of renewable energy. Wind, solar and hydropower plants make up about 6 percent of its distribution mix.

Over the last four years, PJM officials said they have experienced a fundamental shift in the number and type of energy projects seeking to be added to a grid that extends from Virginia to northeast Illinois, each needing careful study to ensure reliability.

In the past, PJM’s energy project  queue was dominated by a few large projects like big natural gas power plants. Now, PJM officials said, they are receiving a proliferation of smaller projects, each needing study.

“Our system wasn’t designed to handle that kind of growth,” said Kenneth S. Seiler, vice president of planning at PJM.

About 2,500 projects are awaiting action by the grid operator, which is based in Valley Forge, Pennsylvania, outside Philadelphia.

They want to move to a new approval process that puts projects that are the most ready for construction at the front of the line, and discourages those that might be more speculative or that have not secured all their financing.

PJM officials said they have reached a reasonable consensus among their members for that plan. However, they are also proposing an interim period with a two-year delay on about 1,250 projects in their queue, and a deferral on the review of new projects until the fourth quarter of 2025, with final decisions on those coming as late as the end of 2027.

“We are taking a pause,” Seiler said of the grid operator’s proposal. “We are refining the process to deal with these smaller types of projects. We will catch up.”

The United Nations Intergovernmental Panel on Climate Change last summer issued the first installment of its latest global warming assessment, prompting UN Secretary-General António Guterres to describe the work as nothing less than “a code red for humanity.”

Still, Seiler said he’s not certain whether PJM can attain the Biden goal of achieving 100 percent carbon-free electricity by 2035. PJM in December announced a study looking at how it could boost renewable energy mix to 50 percent by 2035. With nuclear energy in the region factored in, that could get the PJM grid to about 60 to 70 percent carbon free, he said.

“We’re not sure, frankly, quite yet, because we’re still studying it, if we can get there, 100 percent renewable by 2035,” Seiler said. “But I can tell you, we’re taking a real hard look at it.”

PJM has established a task force to work its proposal through committees of its members, including electric utilities and energy developers. By May, officials hope to submit it to the Federal Energy Regulatory Commission, which has final say.

With so much money at stake in a policy with the potential to help make financial winners and losers, experts say they expect whatever FERC decides may end up in court.

National studies show grid operators across the country have a growing queue of energy projects, many that do not pan out and actually clog up the system. In 2021, the Lawrence Berkeley National Laboratory found that only 24 percent of projects nationally seeking connection from 2000 to 2015 were built, and completion percentages since then appeared to be declining.

Last year, Americans for a Clean Energy Grid, a national group advocating for modernization of high voltage transmission, made the case in a report that backlogs were “needlessly increasing electricity costs for consumers by delaying the construction of new projects which are cheaper than existing electricity production. Because most of these projects are located in remote rural areas, this backlog is harming rural economic development and job creation.”

How PJM resolves its backlog could have implications for the rest of the country, said Jeff Dennis, managing director and general counsel for Advanced Energy Economy, a trade group for clean energy businesses.

“PJM has traditionally been a bellwether,” he said. “Things that PJM puts into place and that FERC approves for PJM often become models for other regions,” he said.

A lot is at stake, he added.

“Delayed interconnection queues and backlogs in bringing new generation on is one of the most significant barriers to state clean energy policies and the jobs and economic development that states are aiming to achieve through transitioning their grids to advanced energy technologies,” he said.

But “folks should be encouraged that there was wide stakeholder support for many, many aspects of PJM’s still-developing generator interconnection process,” Dennis said.

PJM’s efforts to cope with and efficiently manage the backlog have the support of Justin Vickers, staff attorney for the Environmental Law & Policy Center, a Chicago-based environmental advocacy group.

“I hear from developers all the time that PJM’s queue is such a mess that it’s putting their ability to get projects done in jeopardy, and it’s creating uncertainty in getting projects up and running,” he said. “Trying to find a way out of this mess is good.”

He compared what PJM is doing with traffic metering lights at freeway onramps. “What it’s actually doing is managing the congestion to smooth things out. It feels like you should just get there as fast as you can. You shouldn’t have to pause in order to get on the highway. But actually it’s better for everyone if you do, even if it might be slightly worse for you, the individual traveler.”

Ohio-based utility AEP has, within the PJM territory, wind and solar projects proposed for Virginia and is also seeking to add renewable energy to its mix in its Indiana Michigan Power territory, said company spokeswoman Tammy Ridout. She said company officials expect those projects “are largely already in the PJM queue.”

She said AEP supports “the changes that PJM is putting in place to help improve the process, including prioritizing projects that have financing and other key aspects secured so those can move forward first.”

At PJM and other grid operators across the country, “the process right now is effectively broken,” said Gizelle Wray, senior director of regulatory affairs and counsel for the Solar Energy Industries Association, a trade group.

While she acknowledged that some of the association members are happy with what PJM has proposed, she said that others are not, adding: “This is as fair of an outcome as we could possibly get.”

Solutions are needed beyond what PJM has proposed, she said, adding that the association hopes FERC will move the country toward better transmission and interconnection policies.

“We need solutions that make sure this doesn’t happen anymore,” Wray said.

A FERC spokesman did not return requests for comment.

The length of the PJM backlog varies by state. For example, in Pennsylvania, where Gov. Tom Wolf in 2019 set his state’s first statewide greenhouse gas reduction goals, 520 energy projects are currently in the queue, 437 of which are solar. Virginia, which adopted powerful renewable energy portfolio standards for electric utilities in 2020, has 417 solar projects in the queue. Kentucky and West Virginia have been slow to adopt solar but those states have 110 and 57 solar projects, respectively, awaiting approval by PJM.

In Kentucky, Edelen ran for governor in 2019 in part on a platform that the state needed to embrace the reality of climate change and adapt the state’s coal-dependent economy, but lost in the Democratic Primary to Gov. Andy Beshear. He said he understands PJM’s situation and that much of what it has proposed makes sense.

His company, Edelen Renewables, is a partner in a 200-megawatt solar project on a former strip mine in Martin County, Kentucky, that he says is far enough along that it won’t be affected by PJM rule changes. But in January he announced a joint venture with a 200-year-old West Virginia company, The Dickinson Group, with its extensive land holdings, including mine sites, that Edelen said could lead to several new solar farms.

He said he fears those efforts will face years’ long delays as PJM works through its backlog, and he said he’s frustrated that the transition to a new energy economy hinges on the actions of a vital but relatively little-known organization.

In addition to retooling its approval process, PJM should increase the size of its staff to meet the demand and urgency for renewable energy, Edelen said.

“Staffing is an issue,” conceded Seiler.

But Seiler said qualified engineers would need to be found. And then, he said, “it takes several years to train somebody to do a lot of this work.”

Edelen said that just as climate solutions can’t wait, according to the latest science, neither can coal communities.

“I believe we can fight climate change and revitalize forgotten American communities,” he said. “A be-patient approach from (PJM) administrators is not something I agree with.”

Inside Climate News reporter Dan Gearino contributed to this report. 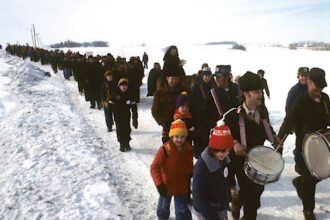 An Energy Transition Needs Lots of Power Lines. This 1970s Minnesota Farmers’ Uprising Tried to Block One. What Can it Teach Us? 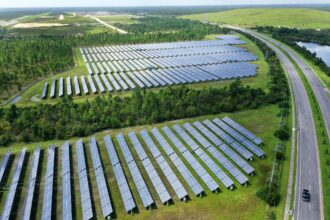