Montgomery County, Maryland, home to more than a million residents, passed landmark legislation this week requiring new residential and commercial buildings to be all-electric—barring some exceptions—starting 2027. While advocates celebrated the significance of the legislation, it came with an asterisk.

Passed unanimously by the county council on Tuesday, the amended “Comprehensive Building Decarbonization” legislation—or Bill 13-22—requires the county executive to issue all-electric building standards for many newly constructed buildings within the jurisdiction by Dec. 31, 2026. Montgomery County is one of the first counties in the Mid-Atlantic to ban gas in most new buildings; nearby Washington, D.C. also banned gas in most new construction starting in 2026.

The bill originally stipulated Jan. 1, 2024 as the deadline for issuing the regulations, which the amended bill pushed back by three years, disappointing many advocates who called the change a missed opportunity.

The regulations, once adopted as the county’s new building code, will require that most of the new commercial and residential buildings are equipped with electric hot water systems and heat pumps for space heating and cooling instead of gas-fired appliances, including stoves.

The amendments also struck out major renovations and new additions to buildings from the all-electric requirements, and pushed compliance requirements out until 2027 for affordable housing projects, public and private schools, and residential buildings of four or more stories. Gas fireplaces and outdoor grills were also exempted.

“I didn’t think it was necessary to push back the timelines. We already have some really good examples of all-electric construction happening today,” said Montgomery County Executive Marc Elrich, who wrote a letter to the council members urging them not to amend the legislation.

Elrich said the pressure for changing the amendment came from the “private sector that would be more than happy if this didn’t happen at all.” He criticized the exemptions given to gas-fired outdoor grills and indoor fireplaces, calling them “an excuse to run a gas line into a building and potentially claim that they want to repurpose the gas to do something else.”

With the implementation date pushed back, Elrich worried what the priorities would be for the future county council. “They have made it harder for the county to do its normal code process. So, we can try but the future council can be a different council,” he said, adding that he considered vetoing the legislation but decided against it.

“Whatever the delays are, it’s a really significant piece of legislation. So, I decided not to let my dissatisfaction about delayed timelines lead me to veto the bill,” he said. “This is cutting edge.”

Hans Riemer, council member and lead sponsor of the bill, maintained that the legislation represented “the leading edge of the electrification movement.”

“Is it a purist bill that has no compromises in it? No. I think the no-compromise versions are the ones you see in all the communities that don’t have anything enacted at all,” he said.

Riemer said that the county council did not vote for the most significant amendment, which would have delayed it even more. “No legislative process produces an outcome that’s perfect to every single person involved. But you have to step back and look at the big picture and I think it’s a big one,” he added.

Regarded as Maryland’s most progressive jurisdiction, Montgomery County passed another milestone Building Energy Performance Standards bill in April that became law the following month. It established minimum energy performance standards for nearly all buildings over 35,000 square feet in the county to phase out natural gas by 2040.

The law also requires county-owned, residential and commercial buildings to report their compliance data to the Department of Environmental Protection on a yearly basis. Property owners can propose an alternative plan for review in case of economic hardship or unavoidable circumstances.

A growing body of scientific studies shows that using gas-fired appliances like stoves indoors can create significant risk of childhood asthma and other respiratory problems from health-harming pollutants released during combustion. Research indicates that people spend almost 90 percent of their lifetimes indoors, mostly in homes, putting individuals at a greater risk from the pollution from home appliances burning gas.

The Biden administration’s Inflation Reduction Act (IRA), which takes effect  Jan.1, 2023, makes it attractive for states and counties to push ahead with decarbonization initiatives by taking advantage of financial incentives—such as rebates for heat pumps and EVs— provided under the landmark federal legislation. Regarded as the single largest investment in climate and clean energy in American history, the IRA provides billions of dollars in federal grants, loans and tax incentives with the aim of tackling the climate crisis and addressing environmental justice.

Montgomery County officials said that federal funding is additional motivation to hasten transition to cleaner sources of electricity and electrifying building and transportation sectors, which were among the major sources of pollution. The county has also experienced a string of gas explosions in recent months, endangering lives and damaging properties, which, advocates said, is another reason to phase out natural gas.

“All fuels such as propane, natural gas, fuel oil, and electricity have the potential to cause fire but only gas and propane have the potential for true explosion hazard,” said Ben Roush, a fire protection engineer at  FSI Engineers.

Roush, who said he personally experienced an accident involving a gas explosion at a family residence, said electric power can also cause fires, but built-in safety systems such as auto switch-off make it much less likely.

The latest study by the Office of the People’s Counsel has warned Maryland’s gas utility customers about rates doubling or tripling from 2021 levels by 2035, and anticipated they could be more than 10 times higher by 2050. The study estimated that as the residential building sector transitions from natural gas, almost all residential customers will be heating their homes solely with electricity by 2050.

“Maryland has an ambitious climate goal of achieving 60 percent emissions reductions by 2031, which is one of the nation’s most aggressive targets. Achieving this goal necessitates immediate changes to drive down emissions in Maryland’s  building sector,” said Ashita Gona, Maryland lead for the Rocky Mountain Institute (RMI), a global nonprofit that has worked on issues including decarbonizing gas utilities and electrifying transportation.

Calling the all-electric building regulations the correct first step, Gona said it must be followed by an equitable plan to transition existing buildings to electric power, especially for residents like low-income and renters who face additional hurdles to building upgrades.

In November, however, the Maryland Energy Administration announced $9.25 million in grants for expanding gas infrastructure in the state, which angered environmental advocates, who called the move a handout to the fossil fuel industry and a roadblock for the state’s clean energy and greenhouse gas emissions-reduction goals.

Gas utilities, trade associations and several chambers of commerce, among others, vigorously opposed the Montgomery County legislation during the public hearing on the bill in July, said Doug Siglin, policy advisor for the nonprofit group Chesapeake Climate Action Network.

He said the advocates made strong and science-based arguments that burning gas, particularly in kitchens, leads to childhood asthma and other respiratory ailments. That, in addition to the increasing gas prices already affecting low-income families, helped sway council members.

“Montgomery County, being the largest jurisdiction in Maryland, with the most economic activity in the state plays a big role,” Siglin said. “We expect that other counties will follow Montgomery County’s lead and ultimately that the Maryland general assembly will consider and pass legislation to electrify new buildings throughout the state.”

The Maryland Commission on Climate Change’s  2021 Building Energy Transition Plan found that “[a]ll-electric new buildings of all types—residential and commercial—have the lowest total annual costs (including equipment, maintenance, and energy costs) in every net-zero emissions scenario it modeled.” The commission advised the state’s general assembly to adopt an all-electric construction code for all new residential, commercial and state-funded buildings no later than 2024. 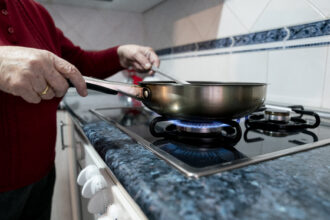