Pennsylvania, one of the nation’s largest coal and natural gas producing states, is moving to join the Northeast’s carbon market. It would mark the largest expansion of the multistate initiative since its inception a decade ago and a milestone in the drive by states to counter the impact of the Trump administration’s retreat from climate action.

Pennsylvania would become the largest member in terms of carbon emissions of the Regional Greenhouse Gas Initiative (RGGI), now a nine-state compact to curb pollution from the electricity sector.

Democratic Gov. Tom Wolf said Thursday that joining RGGI would be a necessary step for achieving the targets for cuts in greenhouse gas pollution he set earlier this year.

“If we want a Pennsylvania that is habitable for our children and grandchildren, where temperatures aren’t in the 90s in October … where flooding doesn’t destroy homes and businesses over and over again, we need to get serious right now about addressing the climate crisis,” Wolf said.

It is not clear how far Wolf can go to join RGGI without action by the Republican-controlled state legislature. As buzz grew in the state capital earlier this year on a possible RGGI move, the Wolf administration reportedly floated a proposal that indicated legislative action would be needed to authorize spending the hundreds of millions of dollars per year in proceeds from carbon fees that the state stands to receive from its involvement in RGGI. But Wolf signed an order Thursday to begin the process of establishing the rules to govern the state’s entry to the RGGI market without waiting for the legislature.

“This is the beginning of the process,” he said. “I’m looking forward to a robust conversation with environmental advocates, the General Assembly, Pennsylvanians all across the state to figure out how we do this right.”

Wolf said he expects Pennsylvania to be a RGGI member within the next two years.

New Jersey, an original RGGI member that dropped out under former Republican Gov. Chris Christie, is currently moving forward with establishing the rules to rejoin RGGI, a months-long process that it expects to have in place by Jan. 1, 2020. Virginia Gov. Ralph Northam, also a Democrat, tried to bring his state into RGGI but was blocked earlier this year by the state’s Republican-controlled legislature.

Pennsylvania’s move is significant because it would bring the first major fossil fuel producer into the RGGI fold. The state is second only to Texas in natural gas production, and third behind Wyoming and West Virginia in coal. Because RGGI puts a price on carbon in the electricity marketplace, it reduces demand for those fuels—with coal taking the biggest hit at first.

Wolf talked about joining RGGI during his first campaign for governor, but after taking office in 2015, it has not been a priority for his administration. Even earlier this year, when he signed an executive order setting the state’s first economy-wide targets for reducing greenhouse gas emissions, he did not move to join RGGI. “What I try to make sure is that what I do is not too much, but not too little,” Wolf said at the time.

But a number of issues may have changed the calculus for Wolf, increasing the appeal of RGGI.

Pennsylvania gets 40 percent of its power from nuclear energy, about twice the national average, and the state’s nine nuclear power stations have struggled in the region’s competitive electricity market competing against abundant, cheap natural gas. Some Pennsylvania lawmakers have been pushing the idea of a direct ratepayer subsidy to bail out the nuclear industry—a move that would raise electricity prices throughout the state.

Participation in the RGGI market, in theory, would make it easier for carbon-free energy, including nuclear power, to compete against natural gas. And a recent analysis by researchers at the University of Pennsylvania’s Wharton School found that electricity rates could decrease under RGGI. Wolf noted that electricity prices have fallen in the RGGI states, while rising overall in the nation.

RGGI State Emissions Down, Economies Up

Since RGGI started in 2009, participating states have cut their carbon emissions from electric generation by 47 percent—90 percent faster than the rest of the country, according to a study by the clean energy nonprofit Acadia Center.

Meanwhile, electricity prices in the RGGI states have fallen 5.7 percent, while rising in the rest of the country by 8.6 percent. Their economies have grown at a faster pace than those of other states, and they’ve generated $3.2 billion in revenue from the carbon permit auction system.

Another factor for Wolf may be that he is eager for a source to fund a massive $4.5 billion “Restore PA” infrastructure program. The legislature has repeatedly rejected his favored funding source—a severance tax on the state’s natural gas business. Pennsylvania is the only major fossil fuel producer without such a tax.

In his RGGI announcement, Wolf stressed Pennsylvania’s growing infrastructure costs, which he said have been worsened by increasing storm damage. In 2018, when the state saw record rainfall and severe localized flooding, there was an estimated $125 million in damage to state-maintained roads and bridges.

“Someone has to pay to fix the destroyed houses, roads, and bridges,” he said. “That’s going to be all of us—every single one of us—through increased insurance, higher taxes to pay for infrastructure road repairs. We know what is causing this crisis. We know If we don’t get control of greenhouse gases like carbon dioxide, the extreme temperatures will get more extreme.”

Environmental groups have been pressuring Wolf to take stronger action on climate change. Pennsylvania’s Environmental Quality Board is considering a petition to initiate a carbon cap-and-trade program that would be more aggressive than RGGI—imposing a price on emissions throughout the economy.

Joe Minott, executive director and chief counsel of the Philadelphia-based Clean Air Council, which helped lead the petition, said the group plans to go forward with the effort for an economy-wide program.

“It is absolutely a backstop, and I told the governor that,” Minott said. “We will not be dropping the petition, but we will be supporting the move to join RGGI, and we look forward to seeing the details.”

He said his group would like to see allocation of some of the proceeds from RGGI assist the state’s low-income ratepayers and improve energy efficiency.

“We are grateful for Governor Wolf’s leadership and hope the General Assembly will join him in support of RGGI,” said Rev. Mitch Hescox, president of the Evangelical Environmental Network in York, Pa., in a statement.

“With the General Assembly working with the governor, the estimated $350 million in RGGI receipts could be used to support Pennsylvania’s nuclear fleet, energy efficiency, and to help clean up Pennsylvania’s dirty air to benefit our children’s health and improve their quality of life,” Hescox said.

Wolf, a former businessman, has sought to govern as a moderate who is friendly to the industry while more dedicated to environmental controls than his Republican predecessor. Wolf has presided over expansion of the state’s fracking industry, the build-out of a new network of pipelines across the state, and construction of a major plastics facility fueled by the state’s vast natural gas stores. 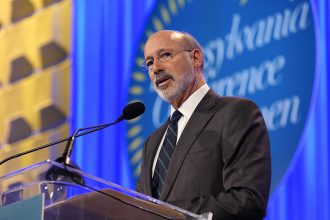 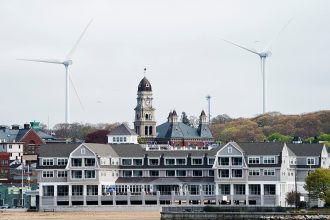 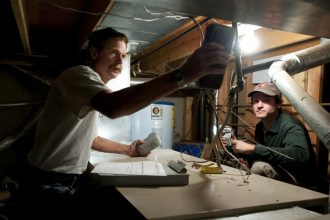