It was a scene that played out in cities and towns along the path of Hurricane Ian as it roared ashore last week: nurses, physicians and other medical personnel working feverishly to evacuate hospitals that were at risk of flooding or worse.

According to a team of Harvard researchers, that harrowing reality may become even more commonplace in the decades to come. Scientists have found that roughly a third of the metropolitan areas on the Atlantic and Gulf coasts are at risk of seeing at least half of their hospitals experience some form of flooding during a hurricane.

In all, a new peer-reviewed study by the team identifies nearly 700 hospitals in communities from Texas to Maine that have a hurricane-flood risk. The areas with the greatest risk are located in states like Florida and Texas, where hurricanes occur regularly.

Among the researchers’ most surprising findings, however, was the flood vulnerability of hospitals in large cities in the Northeast like New York and Boston. That’s because cities in the Southeast and along the Gulf Coast have typically taken more precautions, such as building floodwalls, than cities in the mid-Atlantic region and New England.

“There are some communities, and notably the metropolitan areas of New York and Boston, where landfall from a hurricane may put out of commission a relatively large percentage of hospital beds in proportion to the number of people served in those communities,” said Aaron Bernstein, an author of the study, which appeared in the journal GeoHealth.

“Just by the way our cities have been built and where the hospitals are relative to where flooding is and the size of the population surge, we happen to have higher numbers of hospital beds at risk of being either in buildings that have flooded—or are nonoperational or inaccessible—in comparison to places that actually have a lot more experience with flooding,” Bernstein said of cities like Boston, New York and Philadelphia.

And as climate change hastens a rise in sea levels and contributes to more intense hurricanes, the research team noted, the risk of flooding is mounting significantly.

Bernstein, the director of Harvard’s Center for Climate, Health and the Global Environment, said he and his fellow researchers identified 682 acute care hospitals within 10 miles of the Atlantic and Gulf coasts. Those facilities are located in 78 metropolitan areas with a combined population of about 85 million people. In all, the research team found, those hospitals contain about 200 in-patient and surgical beds.

Researchers compiled a list of the Top 10 metropolitan areas facing the greatest risk of hospital flooding. Miami, New York and Boston led the list, followed by Orlando, New Orleans and Tampa. A trio of Florida communities—the Sarasota, Jacksonville and Fort Myers areas—occupy the next three slots, and Philadelphia rounds out the list.

Drawing on lessons from such past hurricanes as Sandy in 2012 and Katrina in 2005, Bernstein said the researchers determined that taking steps like building new floodwalls or levees were of limited value in terms of helping patients maintain regular access to health care.

“Turning hospitals into Fort Knox is helpful, but not anywhere close to sufficient to protect people’s health and access to health care,” Bernstein said. “Even if a hospital’s functional, if you can’t get people and resources in or out—it’s very hard to deliver care. And so we’ve seen after past hurricanes, whether it was Sandy or Katrina, that after the storm there are huge effects on health because of lack of access.”

Bernstein and his team said their research also incorporated the findings of other studies that found that the longer a county was declared a disaster area, the higher the death rate from those who have been diagnosed with terminal illnesses.

“That’s because they can’t access the care they need, not because necessarily their house was destroyed or they were drowned,” he said. “Hurricanes are enormously disruptive to health care access. And I think this paper underscores how we need to reconcile this reality with the realities of what health care delivery looks like in our country, which is highly fragmented based on networks of care and insurers.”

In an ideal scenario, Bernstein said, contingency plans would allow those in need of care at hospitals at risk of flooding to seek treatment at alternate facilities. However, because of current guidelines set by insurance providers and health care networks, that option is limited for most Americans.

“Unfortunately, for most people in our country, that reality isn’t available,” he said.

Six of the 10 communities on the research team’s list of the metropolitan areas most at risk for hospital flooding are located in Florida. After Hurricane Ian churned ashore there last week, more than 1,200 people were evacuated from hospitals, according to the Associated Press.

For those who study the intersection of the natural environment, man-made conditions and human health, what’s happening in Florida and the findings of the Harvard study underscore the importance of developing robust evacuation plans.

“We’ve got to develop many more contingencies for warning systems in the communities,” said Barbara Sattler, professor emerita at the School of Nursing and Health Professions at the University of San Francisco, who did not  take part in the study.

“Having a sense of where people live and who they are” is critical, she said. “Are they people with mobility issues? Are they people with cognitive issues? Where are the homeless folks in the community? How can we take care of our communities as a whole during these situations? The same is true in Florida right now.”

“In California, we had horrible fires and I was evacuated twice,” said Sattler, a founding member of the Alliance of Nurses for Healthy Environments. “One of the hospitals in the face of the fire had to evacuate in the middle of the night, which they did with the flames in the background. So we’re learning that many of the climate change-related disasters that were predicted are already here—not in the future, they’re already here.”

Sattler said Hurricane Ian should inspire metropolitan areas across the country to recommit themselves to following through on climate action plans on behalf of their residents.

“Pretty much every major city and or county in the country has a climate action plan,” she said. “I would say a minority of them are now actually looking to implement those plans. Many of them put those plans in place,” then “put them in a drawer somewhere. And so it’s events like this that remind us to pull them out of the drawer and say, ‘Now, what did we say we should be doing based on the evidence and the science?’

“We’re vulnerable,” Sattler said. “And whether or not we successfully can bring about any kind of U-turn to the trajectory of climate change, we are still heading toward some of these disasters in the near term.” 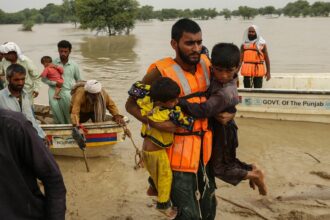