The Environmental Working Group and Waterkeeper Alliance released the images on Friday, organized in  “before and after” photos that show the extent of the flooding and potential pollution in the hardest hit areas.

“We want the public to know the threat we’ve identified is in their back yards,” said Will Hendrick, an attorney with the Waterkeeper Alliance in North Carolina. “It’s sometimes difficult to see these operations from the ground.”

The groups found that flooding partially submerged 36 industrial farms, consisting of 141 barns, and 14 open-air pits containing millions of gallons of manure. Of the 141 barns, the groups learned, 102 housed chickens—each with as many as 20,000 birds.

“With this aerial survey we can see a majority of the flooded-out operations were poultry operations,” said Soren Rundquist, director of spatial analysis for the Environmental Working Group.

The last time a hurricane struck the state’s coast, it was a different picture.

Concentrated animal feeding operations, or CAFOs, have ballooned in North Carolina over the past 30 years, making it the country’s second-largest producer of hogs and third of poultry. In 1992, the state had 5.1 million hogs, but 20 years later, it had 9.5 million.  In that same time period, the number of chickens raised for meat went from 60 million to 148 million—but the expansion in poultry production flew largely under the radar.

During the state’s CAFO boom, producers built hundreds of facilities in coastal counties, on land prone to flooding—and therefore cheap.  But after storms in the 1990s, including Hurricane Floyd in 1999, flooded a number of farms, sending animal waste into waterways and towns, environmental groups began pushing lawmakers to address the problem. They responded by passing a law that placed a moratorium on new or expanding swine CAFOs in the state.  But poultry CAFOs continued to expand and, thanks to some wiggle room in state regulations, have remained largely unregulated.

“The recurrence of more extreme events, more often, is going to happen with the whole thesis of climate change,” Rundquist said. “The 100-year floodplain is a statistical name, but it’s not indicative of what’s going on. In 20 years, we’ve already had two of these events.”

Under state laws, operations that use “wet waste” systems, as most swine facilities do, are required to have a permit. These operations take the waste and store them in open pits, or manure lagoons, and then spray the waste on fields. Most poultry operations use a “dry waste” system, in which they store sodden bedding, or litter, in giant outdoor piles.

Poultry operations that use dry litter disposal systems—most of them—are “deemed permitted” under the state’s law.

“The rules say you don’t have to apply for a permit, and in theory, there are regulatory requirements, but because there’s no application, the state is unaware of most of these facilities,” Hendrick said. “They’re not issued permits, so the state doesn’t inspect them.”

The North Carolina Poultry Federation said in an email that it could not verify the findings of the survey, nor could it estimate the amount of dry litter that might have entered waterways.  “The newer houses are built with solid sidewalls and totally enclosed with power ventilation and all computerized controlled equipment,” Robert L. Ford, the group’s executive director, said in an email. It “would be hard for the litter to escape to the outside even with high water.”
In June, the Environmental Working Group and Waterkeeper Alliance released a survey showing the locations of the state’s 6,500 CAFOs, including 3,900 poultry CAFOs that previously hadn’t been revealed to the public.

“We released a map of each geolocation of swine and poultry operations in the state,” Rundquist said. “With this [new] survey, we’ve further galvanized the point that farming animals in a floodplain is a bad idea.” 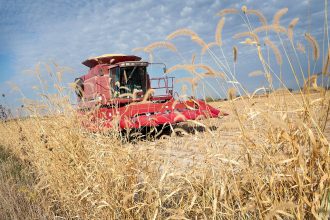