Scientists have found new evidence that the Atlantic Ocean’s circulation has slowed by about 15 percent since the middle of the last century. If it continues to slow, that could have profound consequences for Earth’s inhabitants.

Studies suggest it would mean much colder winters and hotter summers in Europe, changing rainfall patterns in the tropics, and warmer water building up along the U.S. coast that can fuel sea level rise and destructive storms. The changes in the North Atlantic could also intensify streams of icebergs into shipping lanes and coastal ice jams that hinder navigation.

There are already signs that the weakening is having an effect. In 2015, scientists traced the imminent collapse of the commercially important cod fishery in the region to rapidly warming water in the Gulf of Maine, which fits the pattern of slowing Atlantic circulation. Record-warm water off the East Coast that helped fuel 2011’s destructive Hurricane Irene, as well as Superstorm Sandy a year later, appears to fit that pattern, as well, according to NASA.

So what exactly is going on here?

First, the Basics: What Is Ocean Circulation?

The oceans have thousands of currents, gyres and eddies that carry water around the planet. Their movements regulate the Earth’s climate and transport carbon, heat and nutrients.

Together, these currents act like a giant conveyor belt that transports heat from the tropics to the higher latitudes. As warm water from the tropics flows toward the poles in wind-driven currents near the surface, it cools, becoming denser and heavier, and eventually sinks. It then begins flowing back toward the equator in a slow journey deep in the ocean.

Scientists call this the thermohaline circulation because it’s driven by temperature and salinity.

“The ocean is the flywheel of the climate,” said oceanographer Lisa Beal, with the University of Miami’s Rosenstiel School of Marine and Atmospheric Science. “It sets the timing of climate change. It can do things like store heat in one place and release it somewhere else 1,000 years later.”

What Happens If the Atlantic Circulation Slows?

In the Atlantic, the ocean conveyor belt is known as the Atlantic Meridional Overturning Circulation, or AMOC for short. The Gulf Stream, a wind-driven current that brings warm water northward along the U.S. coast, is a key part of it.

If the AMOC continues to weaken at the pace shown by the new research, it would affect temperatures and weather patterns in all countries bordering the Atlantic Ocean, as well in the ocean itself by changing rainfall patterns around the equator.

Europe could see much colder winters and hotter summers, according to a new study published in in the journal Paleoceanography and Paleoclimatology that also showed the potential for a weakening AMOC to cause abrupt climate shifts.

Scientists aren’t exactly sure how a weakening AMOC would affect Florida, the Gulf Coast and the rest of the U.S. East Coast, where the Gulf Stream influences temperatures, storm paths and rainfall, but there are some regional clues, including the warming ocean waters off New England.

Fisheries experts in the Northeast say continued weakening of the AMOC is expected to continue heating that area much faster than the average. That will “further impact fisheries and living marine resources in the region,” said researcher Vincent Saba of NOAA’s Northeast Fisheries Science Center.

The center’s scientists say rising levels of CO2 in the atmosphere have affected the AMOC and slowed the redistribution of heat in the North Atlantic. Waters along the Northeast Continental Shelf have warmed, and the Gulf of Maine has warmed faster than 99 percent of the global ocean over the past 10 years, impacting the distribution of fish and other species and their prey.

At the far southern end of the Atlantic, the circulation of deep, cold water near Antarctica may also be vulnerable to disruption, a recent study in the journal Science Advances suggests.

Those concerns were also reinforced by new research led by scientists at Germany’s Potsdam Institute for Climate Impact Research who analyzed decades of ocean temperature data and found a weakening of the AMOC over time, particularly since the middle of the 20th century.

Scientists know the AMOC’s strength fluctuates. For example, previous NASA research looking at much shorter periods of time found no change from 2002 to 2009.

But the new analysis of longer data sets, published in the journal Nature, shows weakening that’s consistent with climate model projections of the ocean’s response to warming caused by rising carbon dioxide levels. The U.S. Global Research Program warns the AMOC could weaken further by mid-century.

After ruling out most other causes, scientists say an influx of cold, fresh water from melting Greenland ice is probably disrupting the ocean conveyor belt at a delicate point, where the cooled surface water starts sinking.

Fresh water pouring off the Greenland Ice Sheet and increased rainfall make the water less saline, and less dense than saltier water. That makes it harder to sink and drive the current’s journey southward, explained Alexander Robinson of the University of Madrid, a co-author of the Nature study.

“If we do not rapidly stop global warming, we must expect a further long-term slowdown of the Atlantic overturning,” Robinson said. “We are only beginning to understand the consequences of this unprecedented process—but they might be disruptive.”

The same thing may be happening near Antarctica, according to University of Tasmania researcher Alessandro Silvano, who measured the freshening effect of melting glaciers.

“Our results suggest that increased glacial meltwater input in a warming climate will both reduce Antarctic Bottom Water formation and trigger increased mass loss from the Antarctic Ice Sheet, with consequences for the global overturning circulation and sea level rise,” he concluded with co-authors in the Science Advances study.

There’s also evidence that suggests changes in the ocean’s circulation long ago were associated with extreme climate instability, including sharp and sudden surges in glaciation. Chemical tracers in ocean-bottom sediments show that link and also suggest that the AMOC is weaker now than at any time in at least the past 1,000 years.

Another study published in Nature last month describes changes starting about 150 years ago in the deep, cold current that heads southward from Greenland that suggests freshwater from ice melt at the end of the “Little Ice Age” may have had an impact. The researchers also found evidence that the AMOC has been weaker over the century and a half than in the previous 1,500 years.

We’re seeing that kind of melting from Greenland again today as global temperatures rise. Some scientists are warning that serious climate change impacts could be more abrupt than expected, like rapid sea level rise of 20 feet within a century, or a sudden switch to drought-deluge cycles in California.

What Can Be Done About it?

The polar ice caps will continue to melt for centuries even if global greenhouse gas emissions stop immediately because of high levels of CO2 already built up in the atmosphere, so there’s no realistic way to quickly stop changes to ocean circulation.

The recent AMOC studies don’t show what the long-term implications are, so it’s uncertain if the circulation could stabilize at some new level if human-caused CO2 emissions are stopped, if the changes will gradually persist into the future, or if the oceans will pass a climate tipping point into some new, as-yet unknown state.

But understanding the effects can help people prepare. And if scientists can identify where circulation changes may cause oceans to warm exceptionally fast in coming decades, those areas could plan for storm potential and an extra measure of sea level rise that will happen as the oceans warm and expand.

Other parts of the ocean circulation system are also changing as the planet warms, Beal said. That includes the Indian Ocean, where sea surface temperatures have warmed 1 degree Celsius since 1950 compared to the global average 0.6 degrees ocean warming.

In that region, the circulation includes big gyres that are important heat transporters. Understanding of those systems is still scant, but the changes are already affecting millions of people in some of the world’s most densely populated and poorest areas along the coasts of southern Asia. Sea level there is rising faster than the global average, increasing the chances of deadly heat waves and possibly altering the monsoon cycle.

The animation above shows surface currents around the world. Credit: NASA

In the wider Pacific Basin, surface currents spread heat from east to west. Overall, the circulation in the Pacific Ocean transports much more heat energy than the AMOC, making it important to understand how global warming will affect that system, as well, Beal said.

One such study in 2016 documented changes to major currents running along the eastern coasts of South Africa, Asia, Australia, and South America and found some of the currents were releasing 20 percent more heat than 50 years earlier, raising the risks of damaging storms along those coasts. 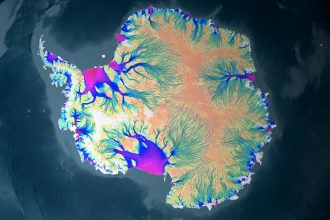 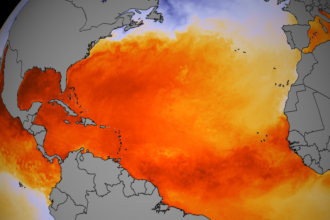