The sweeping multi-year assessments produced by the Intergovernmental Panel on Climate Change set the gold standard for global scientific consensus on how humanity is altering Earth’s climate, and how to anticipate and minimize those changes. Some top climate scientists, however, are reviving a harsh critique of the IPCC’s assessment process, saying that it takes too long and that the delay could actually be creating an excuse for political inaction.

That process is moving forward this week with little sign of changing as scientists and government officials meet in Montréal to nail down a detailed blueprint for the sixth assessment since the IPCC’s creation in 1988. On Wednesday, IPCC Chair Hoesung Lee called the meeting the “most important” in the production cycle for what will become IPCC Sixth Assessment Report—a cycle that began in 2015 and will not conclude until 2022.

That seven-year schedule is simply unacceptable for a document that is “relied on by countless decision makers around the world every day,” said Katharine Hayhoe, an atmospheric scientist and co-director of the Climate Science Center at Texas Tech.

Hayhoe described the IPCC’s long, drawn-out process to produce the assessment reports as “obsolete, outdated, and a waste of experts’ valuable time.” She instead favors continuous updating of climate science, rather than issuing the occasional “blockbuster” assessment.

Another critic, Canadian climate modeling expert Andrew Weaver, argued that IPCC assessments have had powerful impact in the past, but that the long process of birthing another one could actually set back efforts to address climate change.

Weaver, who contributed to every assessment starting with the 1995 AR2 before quitting the lab to serve in the British Columbia legislature four years ago, said the promise of more certain and detailed conclusions yet to come offers political leaders a ready excuse for inaction.

“It gives politicians a way out,” he said.

IPCC assessments take years to complete and are massive documents—the Fifth Assessment Report (AR5), completed in 2014, ran to more than 5,000 pages. The science texts required extensive meetings to hash out consensus among over 830 lead authors and reviewers, while governments hashed out the summary documents in UN-style negotiations. The assessments are written to serve as definitive declarations on climate science, adaptation and mitigation. AR5 cited 9,200 scientific publications.

Hayhoe and other critics say that such updates should instead be rolled out as the science develops to keep the IPCC’s advice to policymakers, businesses and others current. Hayhoe said the science in some areas, such as ice sheet dynamics, Earth’s natural climatic variability, and attribution of extreme weather events, has “changed massively” since the pre-2013 deadline for inclusion in the last assessment.

It is “inexcusable in the Internet age,” she said, that such advances will not be reflected in an IPCC assessment until 2022. She favors a “sustained assessment” process that would update assessment chapters or figures incrementally.

Another prominent authority, Kevin Trenberth, agreed. The senior scientist at the National Center for Atmospheric Research in Boulder wrote in an email to ICN this week: “We need continual updates of the science and its implications.”

Trenberth has long advocated such evolution. In 2013, he called for the IPCC to transition toward a “climate service” that provides “a continuous stream of information on how the climate is changing, why it is changing, what the expectations are on various time horizons, and how best to plan for the future climate.” He detailed that vision last December in a report for the science journal Nature Climate Change.

Jonathan Lynn, head of communications for the IPCC, said the debate over “blockbuster” assessments is long-running. The problem, he said, is how to build the repeated cycles of drafting, commentary and review that are fundamental to the IPCC’s work into an ongoing process. “It’s not clear how this could be handled with smaller or continuous assessments,” Lynn wrote to ICN.

Jim Skea, an energy policy expert at Imperial College in London who co-chairs the IPCC working group examining how to combat climate change, acknowledged the frustration some scientists feel. “IPCC as an intergovernmental organization can be quite conservative. It can take a lot of time to change practices and products,” he said.

The Last Attempt to Change the Assessment

Speaking with ICN from the Montréal meeting, Skea noted that, in 2015, the IPCC did consider forgoing a sixth assessment in favor of a larger number of more focused “special reports.”

Many countries, however, argued for another assessment—particularly developing nations, which have less internal capacity to do their own comprehensive reports.

The IPCC’s member governments (195 today) ultimately committed the science organization to doing all of the above: by the end of 2015, they had signed up IPCC for the AR6, as well as three special reports. The latter include a study of scenarios for limiting warming to 1.5°C — the aspirational target for international climate action agreed to under the Paris climate agreement.

The IPCC’s heavy agenda represents a big lift for international climate experts, who volunteer their time. “This is a huge burden on the scientists,” said Swiss climate scientist Thomas Stocker, one of the group co-chairs for AR5.

Funding Is Another Concern, Given U.S. Budget

Trenberth said it is not clear how U.S. scientists will participate going forward, given the Trump administration’s proposal for sweeping cuts to international climate action and science.

Stocker said he supports producing AR6 but is concerned that money woes could harm its quality. While Congress could still restore funding, and a Senate panel voted yesterday to move in that direction for some international climate support, Trump has proposed zeroing out the roughly $2 million per year that the U.S. has been contributing to the IPCC. Other countries, such as Germany and the Netherlands, are pledging more, but Stocker said the IPCC’s financial situation is, “very fragile if not to say unsustainable.” He worried that the IPCC will need to scrap workshops and meetings that, he said, are required to reach “a robust consensus.”

Skea said IPCC’s finances are on the agenda in Montréal this week. But for now, he said, it is still business as usual: “We’re not being told to do anything differently. We’re just moving on with it.” 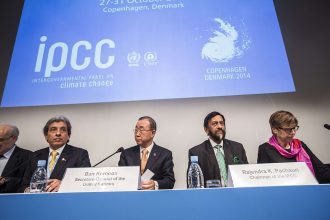