The fast-growing fossil fuel divestment movement is marshalling forces for this week’s Global Divestment Day—an event organizers hope will strengthen the crusade’s reach around the world and prove that it’s “a force to be reckoned with.”

Fossil Free, which has sister groups in Canada, Europe, Australia and New Zealand,  said divestment day will feature a day-long series of actions on Feb. 13 in the U.S. (which will be Feb. 14 in some regions). So far, the schedule includes 326 events spread across six continents and 48 countries, including flash-mobs, street theater, elaborate props, sit-ins, vigils, dancing, a huge parade of bicycles, social media blitzes and more.

“There are going to be folks in a multitude of countries demanding action on the climate in the form of divestment,” said Jay Carmona, a California-based community divestment campaign manager with 350.org, a nonprofit group that sponsors the Fossil Free divestment campaign as well as other climate-related initiatives.

“We want to send one clear message, that now is the time to end the age of fossil fuels,” Carmona said.

The groups also will urge people to remove fossil fuels from their personal portfolios and to close accounts with banks and funds “who continue to invest in climate chaos,” according to the Fossil Free website.

The divestment campaign has taken aim at removing fossil fuel investments from large portfolios because the use of coal, oil byproducts and natural gas is the largest source of human-generated carbon dioxide. That CO2 is building up in the atmosphere and steadily warming the planet—a trend scientists say will lead to catastrophic damage around the globe.

There’s broad agreement that lessening the impact of climate change requires a global shift away from fossil fuels to low-carbon sources of energy. Powerful oil and fossil fuel companies and their lobbyists have worked to derail efforts to do so.

The divestment campaign is targeting university endowments, charitable foundations, pension funds and other large investors, and arguing, primarily, that “if it’s morally wrong to wreck the climate, it’s wrong to profit from that wreckage.”

Oil company holdings have long been an investment staple for portfolio managers and steady dividend payments have kept them popular with individual investors. But the business case for keeping those holdings has been weakening amid plummeting oil prices, falling stock prices, looming climate regulations, and a growing realization that a large portion of coal and oil reserves must go unused in order to keep warming manageable.

“It’s the moral case that we need to act for our future generations, and for the betterment of our communities and our planet,” Carmona said. “And there’s also a very strong financial case that the fossil fuel industry is based on a model that’s not sustainable financially.”

Fossil Free and other climate-oriented divestment groups want portfolio managers to stop adding new investments in fossil fuel companies and to sell off their holdings in the top 200 fossil fuel companies within five years. The goal, in part, is to reduce the industry’s influence over politicians and climate policy.

So far an estimated 200 institutions, with combined investment assets of more than $50 billion, have committed to divest, including notable names such as the Rockefeller Brothers Foundation, the British Medical Association, Stanford University, the World Council of Churches and a long list of faith organizations. More than 20 overseas universities have agreed to divest.

The momentum has continued in 2015. Recent divestment-related developments include:

► Norway’s $861 billion sovereign wealth fund, the world’s largest, said it divested from 114 companies in the last three years because of “high levels of uncertainty about the sustainability of their business model.” The divestments included 22 companies because of climate-related risks; 43 companies on deforestation risk; 35 companies because of water management issues; and 14 companies because of other, unidentified issues.  Among the total: 14 coal mining companies and five firms with oil sands projects. The fund, which is fueled by proceeds from government-owned oil, said it also asked oil companies Rosneft, Whiting Petroleum, Oil India and HollyFrontier to improve their disclosures on climate change risks.

► A senior investment analyst at European investor Axa IM warned that climate risk is becoming “synonymous with reputation risk,” according to the Guardian. In discussing factors behind the decline in oil prices, the analyst said, “moral issues are also playing a growing role, with the divestment movement steadily gaining traction amongst investors across the globe.”

► New York City’s New School announced that it would eliminate fossil fuels from its endowment and increase investments in renewable energy as part of a wide-ranging climate initiative. The New School is said to be the second-largest college endowment to commit to fully divesting from fossil fuels. The largest is the University of Dayton.

► A divestment announcement from Chalmers University of Technology, which became the first Swedish university to join the campaign. Chalmers said it would sell about $600,000 in fossil fuel holdings. 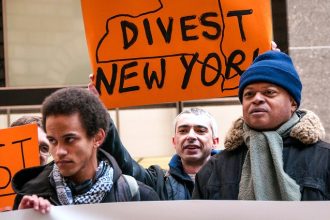