Restoring and protecting beaver and wolf populations and reducing cattle grazing across large tracts of the western United States could be a big part of meeting President Joe Biden’s goal of conserving at least 30 percent of the country’s lands, lakes and rivers by 2030, a new study suggests.

Both animals are keystone species that help shape the landscapes they live in, and bringing them back in a big way could help forests and streams struggling to adapt to rising temperatures and aridification, a team of 20 scientists concluded in a paper published Tuesday in the journal BioScience.

An expanded wolf population would thin out herds of elk and deer that hamper forest regeneration when they browse on tender young trees. Beavers would modulate flows along streams and rivers by building dams that create areas of spongy soil that absorb water during heavy rains and release it back slowly in drier times.

Both species were nearly wiped out as Europeans invaded North America and settlers moved westward, but they are making a slow comeback despite some social and political resistance. The new paper proposes to speed the process by creating a 193,000-square-mile rewilding network spanning parts of 11 western states where re-establishing those two species would spur a self-reinforcing chain of bio-climate feedbacks. The positive feedback loop would lead to greater carbon storage in the wetlands and in recovering forests and provide more protection from extreme floods.

One of the “profound cascading effects” of the rewilding plan, the authors wrote, is that restoring wolves and beavers would also provide umbrella protection for many threatened and endangered species in the region that share the same habitat, including amphibians, crustaceans, fish, mammals, reptiles and snails as well as flowering plants.

It’s an ambitious idea whose time has come, given the “unprecedented convergence of extended drought and water scarcity, extreme heat waves, massive fires and loss of biodiversity,” said the study’s lead author, Bill Ripple, an ecologist at Oregon State University. All of the areas mapped by the plan are public lands managed by federal agencies, and Ripple said that President Biden could take action on parts of it with or without Congress.

“The land does not need to be purchased or leased, and there do not need to be easements” that would involve tangling with private property owners, he noted. “What it would take would be administrative action at the federal level or legislative action at the federal level. It could be a presidential executive order, as part of the Biden 30-30 America the Beautiful plan. So we have a simple three-prong approach, to remove livestock from some of the federal lands, and then to promote wolves and beavers as keystone species.”

Nature Can Heal Itself

The importance of nature-based solutions was emphasized in recent reports from the United Nations Intergovernmental Panel on Climate Change. And, in June, the European Union proposed an ambitious restoration plan that would halve the use of pesticides by 2030 and repair the 80 percent of European habitats that are in poor condition.

Max Rossberg, chairman of the European Wilderness Society, who was not involved in the new paper, suggests that conservation biologists are increasingly recognizing that both the climate and biodiversity crises developed as humans disconnected from nature during the industrial age.

In far-flung places from Mono Lake in California to the Neretva River in Bosnia, they are also learning that sometimes, the best thing humans can do is get out of the way and let nature take its course, he added. In both of those locations, humans have allowed natural stream flows to prevail in restoration work, and in both cases monitoring suggests that the hands-off approach works.

“It is the fundamental flaw in our thinking that we think we know better than nature,” Rossberg said. “We believe we have the knowledge, the skills, as ecosystems engineers, to modify nature to a degree that, after our modification, nature is in a better state. If anything, we should be humble enough to realize that we are not smarter than nature.”

Rossberg said that beavers are a good example of the ecological benefits of rewilding, but added that it is important to consider how restorations affect people.

“These animals could help with climate change,” he said, while posing temporary challenges for humans. He pointed to farmers: “The beaver is good for them because it keeps the water after heavy rain where it is supposed to be, in their lowlands, in their agricultural lands.”

Yet the farmers “may lose some of their fields because a beaver will build a dam the way he thinks that is best, not where you would like it to be,” Rossberg notes. “But let’s trust the beaver, that he has in a sixth sense, a good idea where a dam would retain the maximum amount of water.”

Because beavers build giant organic sponges that can absorb huge amounts of excess flows and then slowly release them downstream later, they help to sustain stream flows during dry and hot times.

“But you have to go to the farmer and tell them, ‘By the way, if you have a beaver in your fields you will lose some crops,’” he said. “We will compensate for that, do not worry, because actually it is a good thing: Now you have a dam and a lake that is self-managed. You don’t have to pour concrete. You don’t have to do anything. The beaver takes care of all of that.’”

‘We’re Running Out of Wild Places’

Wolves are also ecosystem builders, but as apex predators, they work from the top down by keeping many other animals wary and on the move, said a co-author of the study, Dominick DellaSala, chief scientist with Wild Heritage, an Earth Island Institute project advocating primary forest preservation. Studies in Yellowstone National Park show how shrubs and trees multiplied in places where wolves prevented elk and deer from over-browsing new growth, he said.

Using apex predators like wolves as ecosystem indicators is a basic conservation practice all over the world and the benefits are well documented, but none of that matters when they start killing cattle. That’s when it gets complicated and political, he said.

“That’s the harder nut to crack in all of this,” DellaSala said, adding that it comes down to whether humans can accept that they are dependent on the natural world and accept that relationship.

European colonizers broke the bond with nature during the settlement of the Americas, when the doctrine of “manifest destiny” led to the erasure of wild landscapes in favor of domestication and in many cases the extermination of Native peoples. “It had huge consequences, both for biology and culture,” DellaSala said.

Living with large-scale beaver and wolf restoration in the West would require rethinking the region’s post-colonial conception of the human relationship with nature, he added. “In places that have wolves, like Italy, they seem to get the coexistence and they deal with it, because that’s part of their bio-cultural landscape,” DellaSala said.” It’s also part of the bio-cultural landscape in North America, particularly the bio-cultural connections that were in existence, and still are, with the First Nations and Native American tribes, but that won’t necessarily quell the opposition.”

He said there are other ways to create a rewilding framework, but for the West, “those two species are really good umbrella species for tackling this issue. If you capture enough habitat for those two species, chances are you’re going to be rewilding the landscape,” he said.

“Those ecosystems will presumably function more naturally and continue to draw down carbon from the atmosphere while providing biodiversity, clean water, wildlife habitat, all the co-benefits that you get by having a natural climate solutions approach,” DellaSala added.

“Natural climate solutions can complement the transition out of fossil food fuels,” he said. “But if we don’t do both of those things, simultaneous at scale, with a moonshot that everyone’s involved in, like the moonshot in the 1960s, we’re going over the cliff.” 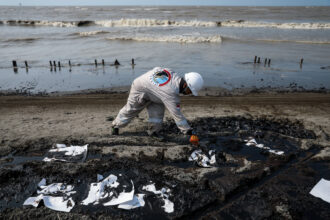 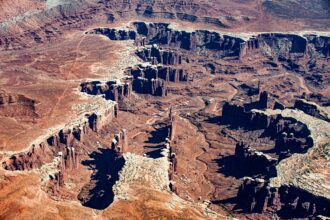