The historic climate package includes Senate Bill 1137, which bans new oil and gas wells within 3,200 feet of homes, schools and any other place people could be harmed by drilling operations. Democrats’ previous attempts to create health and safety zones around oil and gas operations failed in 2020 and 2021, blocked by just a few members of their own party.

Critically, the new law includes safeguards for the millions of Californians who live within the roughly half-mile buffer zone of existing drilling operations, tightening restrictions on everything from disruptive noise and light to the release of toxic gases from wells and storage tanks. In addition, operators must provide regulators with analyses of chemicals in any wastewater transported from existing drilling sites and, by January 2027, implement a plan to rapidly detect and fix leaks of noxious gases and the climate super-pollutant methane at these sites.

But the ink had barely dried on this groundbreaking health and safety law when Nielsen Merksamer, a lobbying firm that represents several major oil and gas companies, filed a referendum to reverse it on behalf of Jerome Reedy, a board member for the California Independent Petroleum Association, an industry lobby group.

Now, the industry and its allies have until Dec. 15 to collect enough signatures (623,212, to be exact) to qualify for the next general election. If they do, implementation of the law—which was supposed to go into effect the first day of January 2023—will be delayed until voters have their say in 2024.

“I am optimistic that the referendum will not be successful,” said state Sen. Lena Gonzalez (D-Long Beach), who authored S.B. 1137. “More than ever before, people believe in a carbon- and fossil-free future. And of course, we will not give up without a fight.”

The referendum has become a standard tactic in California for well-endowed special interests to reverse progressive gains, community organizers say.

“Even if laws are passed fair and square in the legislative process, when big industry and big companies don’t like the outcome, they choose to try to play by their own rules,” said Kobi Naseck, coalition coordinator for VISIÓN (Voices in Solidarity Against Oil in Neighborhoods) at the Center on Race, Poverty and the Environment, an environmental justice nonprofit with offices in Oakland and Delano, in the San Joaquin Valley.

The day after oil industry representatives filed the referendum, Newsom took the stage in New York City at the Clinton Global Initiative, which aims to push action on climate change and other global crises. For all California’s work to chart a clean energy future, Newsom told an interviewer, the oil industry continues to hold considerable sway over state legislators.

“We may be dominated by Democrats, but many of us are wholly owned subsidiaries of the fossil fuel industry,” Newsom said. If he hadn’t put pressure on his own party’s lawmakers, he added, the special interests would have prevailed again.

A ‘Point of Contrast’

On a sunny Friday in mid-September, California state legislators, community organizers and environmental justice advocates gathered on Mare Island, about an hour’s drive north of San Francisco, to watch Newsom sign what his office called among the most aggressive climate measures in the nation’s history.

The location of the signing ceremony—outside a solar-powered federal office building, next to an electric-vehicle charging station under arrays of solar panels—was meant to symbolize the transition from California’s past reliance on fossil fuels to a future fueled by renewable energy. “This facility behind you, it’s completely powered by the solar you see above you,” Newsom said. “What you see behind us is a point of contrast.”

The past, he made clear, is represented by the oil refineries behind him on the opposite shore, including the Phillips 66 San Francisco Refinery, which was fined $285,000 two years ago for dumping more than 5 million gallons of toxic wastewater into San Pablo Bay.

Phillips 66 is a Nielsen Merksamer client.

Nielsen Merksamer specializes in election law and litigation. The firm has provided legal counsel on more than 400 ballot measures, according to its website, including Proposition 22, pushed by Uber, Door Dash and other app-based companies to exclude their workers from basic labor laws. The measure passed, was subsequently ruled unconstitutional last summer and is now under appeal. Most recently, Nielsen Merksamer handled referenda for the tobacco and restaurant industries to reverse newly enacted laws banning the sale of certain flavored tobacco products and boosting pay and protections for fast-food workers.

Neither Nielsen Merksamer nor the California Independent Petroleum Association, whose board member authored the setback referendum, responded to several calls and emails from Inside Climate News.

The newly enacted law represents a hard-won victory for groups that have worked for years to protect communities from the growing list of health problems linked to living near oil and gas drilling: increased risk of cardiovascular and respiratory diseases, cancer, chronic fatigue, nosebleeds, headaches and birth defects, among other serious conditions. The law refers to studies documenting many of these conditions at distances under 3,200 feet.

Yet the oil industry has invested tens of millions of dollars over the past three years alone trying to hold on to that past.

A review of lobbying and campaign contribution records curated by the Center for Responsive Politics shows that the industry and its trade groups have spent more than $36.3 million lobbying state regulators and elected officials since 2020. They’ve spent more than $29 million on campaign contributions to influence state and federal political races during the same time, when Democrats’ first two attempts to create health and safety zones around oil and gas operations failed.

“It was not easy to pass S.B. 1137, but I am so happy and proud that we did it,” Gonzalez told Inside Climate News. “Our frontline communities are tired of the environmental injustice they have been subjected to for years. And yes, similar legislation failed in the past, but it only made our community voices grow stronger.”

Passing the setback law is the result of a “monumental effort” by the people who are most affected by polluting oil and gas wells in their backyard, said VISIÓN’s Naseck. “It really came down to people power in the end, and for a concerted group of organizers and organizations and people to say, ‘We’re not going to be quiet about this, and we’re going to keep fighting for our right to clean air and to live somewhere where oil and gas isn’t polluting our backyard or polluting our kids when they’re at school.’”

Oil companies could relocate oil and gas wells or concentrate them in some of the industry’s “vast oilfields,” he said. “Instead, they’re willing to spend tons of money wasting taxpayer money to get this on the ballot and try to get their way.”

The safeguards codified in the new law are akin to seat belts or getting lead out of paint and gasoline, Naseck said. It’s about public health. But for the oil industry, he added, “it’s really big business versus the people of California.” 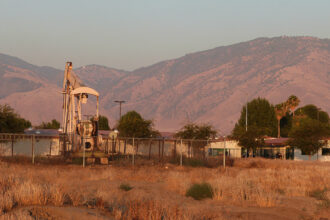 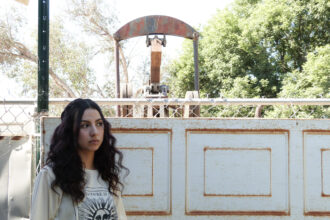