Two months after the biggest fracking-related spill in recent North Dakota history, state lawmakers are pushing legislation that could help prevent similar disasters in the future.

More than 2 million gallons of toxic wastewater gushed from a hole in the type of pipeline known as a “gathering line” near the town of Williston between the last week of December and first week of January. The spill contaminated at least two local waterways. The rupture went unnoticed for about 12 days before a pipeline worker discovered it.

Gathering lines carry oil, gas and wastewater laced with heavy metals, high salt levels and possibly radioactive material from wells to other sites, for processing or disposal. The number of such lines continues to soar in the midst of the nation’s fracking boom.

North Dakota has 20,000 miles of gathering lines, mostly in rural areas, and that number is expected to increase by around 60 percent over the next five years. State regulators know the location of only about one-third of the existing gathering lines—all the lines installed after August 2011. The recently ruptured line falls into this minority; it was installed last summer.

Of the more than 240,000 gas-and-crude gathering lines nationwide, the federal Pipeline and Hazardous Materials Safety Administration regulates only a fraction of them—mainly the lines that cut through cities. Few states have any regulations on the books for such pipelines.

Wastewater, or produced water, lines are another animal: No one knows how many exist, they don’t fall under federal jurisdiction, and most states aren’t tracking them. “The whole gathering-line issue is a big question mark,” said Samya Lutz, outreach coordinator for the advocacy group Pipeline Safety Trust. “Produced water would be another question mark on top of that,” Lutz added.

Now, two competing bills in the North Dakota legislature would take the first steps to regulate wastewater-and-crude gathering lines, because those lines have proved to be most at risk of spills. The bills are currently written to target future pipelines, not the thousands of miles of active pipelines for either produced water or crude oil.

Lawmakers told InsideClimate News that they expect a final bill will be sent to Gov. Jack Dalrymple and very likely signed into law this spring. When that happens, North Dakota will likely be the first state to begin to regulate gathering lines for wastewater.

Both bills would require operators to put down financial security in the form of a bond for such lines before construction. The bills also require new gathering lines for waste or crude to be fitted with technology for monitoring and leak detection.

“What we want to ensure is that we are preventing as many incidents from happening,” according to Rep. Corey Mock, a Democrat from eastern North Dakota. Mock helped draft one of the bills.

A Surge in Spills

In North Dakota, the number of drilling-related spills occurring annually has steadily increased in recent years, according to an analysis by Inside Energy, a news site. In 2010, there were about 1,000 spills reported. In 2013, there were around twice as many reported.

Since the start of the year, there have been six large spills in North Dakota: five dumped at least 450 gallons of fracking byproduct, and one spilled nearly 500 gallons of oil, according to the state’s online spill databases.

Among those accidents was the largest wastewater spill in North Dakota since the fracking boom kicked off in the early 2000s. On Jan. 6, the spill near Williston was discovered by an employee of the pipeline’s operator, Meadowlark Midstream Company, LLC. Some 2.2 million gallons gushed through a hole 2 inches in diameter­­­––the width of two quarters side-by-side.

Water sampling shows the spill affected at least two local waterways in the Missouri River watershed—Blacktail Creek and Little Muddy River—as well as groundwater around the rupture site. Officials say the spill doesn’t pose a health threat—and that no water wells have been impacted. The pipeline in question measures 4 inches in diameter and is made of a composite material called Fiberspar.

The pipe was immediately shut off after the leak was discovered. The ruptured section of the pipe has been replaced but the line remains shut off. The cause of the spill is still being investigated. According to local news organization Inforum, the pipeline was outfitted with equipment to allow remote monitoring, but the company wasn’t using the technology. Instead, workers checked for leaks using handheld devices.

The wastewater comes from deep underground. When a well is first tapped, flowback, a mix of the slurry cocktail used to blast open the rock and minimal amounts of produced water, comes back up. Once oil and gas start to flow out, produced water continues to gush up for months.

Two bills have been proposed to regulate North Dakota’s gathering lines for wastewater and crude—but only one can survive.

The House unanimously voted to approve House Bill 1358 on Feb. 23, and it has since been sent to the Senate and a committee meeting is scheduled for March 13. This bill would require gathering-line monitoring and leak detection, but it doesn’t prescribe a specific technology. Instead, the bill would let regulators use their best judgment. The change would apply to gathering lines that go into service after Aug. 1, 2015.

The House bill also mandates a study to be carried out by researchers at the University of North Dakota. This $1.5 million study would evaluate and prescribe the best way to monitor and respond to leaks at produced-water gathering lines.

The Senate unanimously approved Senate Bill 2374 on Feb. 20, and that bill has been passed over to the House for review starting March 6. It requires specific pipeline monitoring technologies for all wastewater-and-crude gathering lines installed after April 1, 2016. Another key part of the bill calls for a legislative study to identify the best technology to detect and prevent pipeline leaks.

Dave Glatt, from the Department of Health, the agency responsible for responding to pipeline spills, wrote in an email to InsideClimate News that either bill “is anticipated to benefit our department and the environment” by providing extra funds for cleanup and requiring technology that should reduce the number and severity of future pipeline issues.

Both bills are missing some key areas of regulatory oversight, according to Lutz, of Pipeline Safety Trust. For example, neither bill proposes public notification of new gathering lines nor public access to monitoring results. She also pointed out that both bills ignore gas gathering lines.

“If safety to the environment” is the issue driving these bills, then inspection and monitoring “should be done at all the gathering lines,” she said. Most gathering lines nationwide, and in North Dakota, carry gas.

Nobody Had Any Rules

This isn’t North Dakota legislators’ first attempt to regulate gathering lines. Back in 2013, Rep. Anderson, the originator of HB 1358 and a Republican from a district with extensive drilling activity, proposed a similar bill requiring monitoring and leak detection for all gathering lines in the state, including those for wastewater.

Although the bill failed, the Industrial Commission, the state department for oil and gas, expanded its jurisdiction to include gathering lines shortly thereafter. Then the department started requiring operators for gathering lines installed after August 2011 to submit basic information about the lines, including route location and material being transported.

In 2013, the Industrial Commission had planned to review other states’ practices to use as a model for the state. According to agency spokeswoman Alison Ritter, this line of inquiry provided a dead end—because nobody had any rules.

Since then, Ohio and Texas have passed regulations specifically for oil-and-gas gathering lines. Texas requires financial security for its lines, while Ohio mandates that companies report new lines and perform inspections to identify any leaking. In Colorado, California and Pennsylvania, there aren’t specific rules for gathering lines. Instead, general safety rules for reporting and responding to spills likely apply. 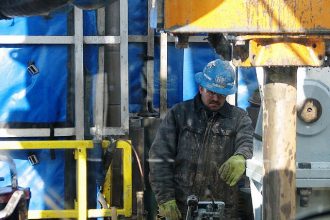