Methane is spewing from more than 1,000 natural gas leaks under Manhattan, giving it 10 times the number of leaks per mile in its aging natural gas pipelines as cities with more up-to-date infrastructure, according to a study published Wednesday in the journal Environmental Science and Technology.

Methane is the second-largest contributor to global warming after carbon dioxide, making the reduction of methane emissions a high priority in fighting climate change.

While methane emissions are significantly smaller than those of CO2, methane is much more potent as a greenhouse gas, trapping 86 times more heat in the atmosphere than carbon dioxide over a 20-year period and 34 times more over 100 years.

In the study, researchers measured concentrations of methane on the streets of New York, which has a high concentration of decades-old cast iron and steel pipes beneath its streets. They compared the findings with measurements in Durham, N.C., and Cincinnati, which recently replaced their aging pipelines.

Methane leaks are the subject of an $18 million project led by the Environmental Defense Fund that includes work by more than 100 researchers. That project, which is not affiliated with the current study, is being done in collaboration with the natural gas industry and utilities.

The researchers in the Manhattan study concluded that pipes under Manhattan averaged 4.3 leaks for each mile of pipe. Durham had 0.2 leaks per mile and Cincinnati had 0.5.

Replacing the pipes, some of which have been in use for more than 100 years, also improves air quality and reduces the risk of explosion. One such explosion killed eight people and destroyed an apartment building in East Harlem in 2014.

“You don’t even need to invoke climate change for this to be useful,” Jackson said. “Methane and other hydrocarbons help form ozone in the air. There are [also] consumer safety justifications for fixing these leaks. There are rare but unfortunate explosions that still occur each year.”

The leading source of methane from human activities in the U.S. is the oil and gas industry. The industry’s current methane emissions are estimated at 7 million tons a year, the equivalent greenhouse gas output of 160 coal-fired power plants. Roughly half of the industry’s emissions occur far from wells, in “downstream” locations such as the leaks under city streets, Jackson said.

When natural gas leaks from pipelines, utility companies are typically allowed to bill customers for the lost gas. A study commissioned by Sen. Edward Markey, a Massachusetts Democrat, in 2013 found that leaks cost the nation’s natural gas customers at least $20 billion from 2000-11 for gas that never reached their businesses or homes.

“It’s like doing maintenance on your house,” Jackson said.  “You spend a little more upfront but save money in the long run.”

Consolidated Edison Co. of New York, the utility company that owns the gas distribution system under Manhattan, is replacing old cast iron and steel pipes with durable, plastic pipes in its system at a rate of 65 miles a year, costing $215 million annually. The current rate is a 25 percent increase from 2013 and will result in replacement of 80 percent of the oldest pipes in 26 years.

Con Edison has the capacity to increase its rate of pipe replacement from 65 miles to 100 miles a year, but would need state regulators to allocate more money, said Con Edison spokesman Allan Drury.

Jonathan Peress, Air Policy Director for Natural Gas at the Environmental Defense Fund, said Con Edison and other utilities could reduce their emissions more efficiently by focusing on the volume of natural gas emitted from each leak.

“By focusing on the largest leaks, you can improve the cost effectiveness by approximately a factor of three because roughly 20 to 25 percent of leaks are responsible for 60 to 75 percent of all emissions,” Peress said.

As part of the EDF methane project, EDF and Google Earth are estimating leak volume by measuring street level methane concentrations, along with wind direction and speed.  Jackson, who also collected wind data in his study, didn’t extrapolate leak volumes.

Con Edison is working with EDF and others to identify which leaks in its system are responsible for the greatest share of methane emissions, according to spokesman Drury. The company also partnered with EDF to publish interactive maps of active gas leaks on Con Edison’s website.

Jackson said he hopes the company will be able to ramp up its leak repair and replacement programs while being “weaned” from charging customers for lost gas.

“By doing so we can help the environment, improve consumer safety, create jobs, and ultimately save people money,” Jackson said. 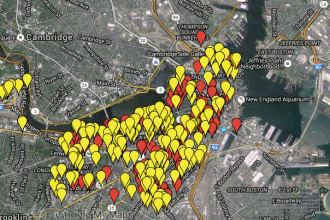