The ruling Wednesday means Exxon must comply with Healey’s civil investigative demand for company records. Healey requested the documents as part of an investigation to determine if Exxon misled consumers about the risks climate change posed to its business.

Exxon had argued Healey lacked the jurisdiction to pursue the investigation and maintained Texas was the proper venue for any legal action because the company is headquartered in Dallas.

The parallel legal battle Exxon is waging in a federal court in Texas to derail Healey’s investigation remains under way.

The Massachusetts court ruling affirms the authority of the attorney general to investigate fraud, said Chloe Gotsis, a spokeswoman for Healey.

“Exxon must now end its obstructive tactics and come clean about whether it misled Massachusetts consumers and investors about what it knew about climate change, its causes and effects,” Gotsis said.

Healey opened the investigation in April under the state’s consumer protection laws seeking documents back to 1976 related to Exxon’s understanding of climate change and the effects it could have on its business.

The civil investigative demand—similar to a subpoena—included a request for documents detailing the company’s decades of climate research, how it was preparing for sea-level rise and materials prepared for potential investors.

The demand also sought statements by Exxon officials, including by the company’s then-chief executive, Rex Tillerson, who was questioned Wednesday about climate change during his Senate confirmation hearing to become secretary of state.

The company argued that Healey’s investigation amounted to an “arbitrary and capricious” abuse of power and was politically motivated.

But the judge said that under state law Healey was empowered to open the investigation based on her belief that a person or company was engaged in unfair or deceptive business practices in the state and that she should have “broad access” to Exxon records to determine if there were any violations of law.

Brieger also rejected Exxon’s contention that the company was targeted by Healey because of its views on global warming.

“The court finds that the Attorney General has assayed sufficient grounds her concerns about Exxon’s possible misrepresentations to Massachusetts consumers—upon which to issue the CID,” said the 14-page ruling.

“In light of these concerns, the court concludes that Exxon has not met its burden showing that the Attorney General is acting arbitrarily or capriciously toward it.” 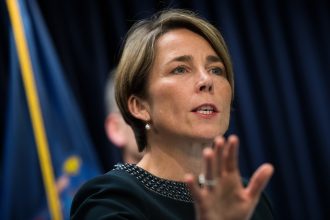