For climate activists, the term “Exxon Knew” has settled deeply into the lexicon of climate accountability, shorthand for the contradiction between the oil giant’s long campaign to publicly question climate science and its internal understanding that the science was sound.

Now, new academic research lends statistical rigor to this concept by showing that the company’s own climate projections, dating back decades, consistently predicted the warming that was to come primarily from burning fossil fuels.

The peer-reviewed paper, published Thursday in the journal Science, analyzed all known climate predictions produced or reported by scientists at ExxonMobil and its predecessor from 1977-2003, and found that they were “at least as skillful” as those by independent experts (Exxon merged with Mobil in 1999). Like those independent models, most of Exxon’s proved to be accurate.

“They didn’t just vaguely know something about global warming decades ago, they literally knew as much as independent academic scientists did,” said Geoffrey Supran, the paper’s lead author, who recently left a research position at Harvard University to become an associate professor of environmental science and policy at the University of Miami’s Rosenstiel School of Marine, Atmospheric and Earth Science. “We now have this airtight, unimpeachable evidence that Exxon accurately predicted global warming years before it turned around and publicly attacked climate science.”

This core understanding—that Exxon executives knew climate change was real, but publicly cast doubt on the science anyway—was first revealed in a 2015 investigation by Inside Climate News and has since been supported by reporting and research by other news organizations, activists and academics.

The new research adds a quantitative assessment that could be useful in lawsuits and other efforts to hold the company accountable for its role in delaying action on climate change, said Benjamin Franta, a senior research fellow in climate litigation at the Sustainable Law Program at Oxford University in the United Kingdom. Franta was not involved in the new research.

“This is a higher level of analysis,” Franta said.

More than two dozen cities, counties, states and other jurisdictions have filed lawsuits against Exxon and other oil companies seeking damages for climate impacts, and similar cases have been brought in other countries. Democrats in Congress have also held hearings and investigations. At one of those hearings, Exxon’s chief executive, Darren Woods, testified that the company had never misled the public about climate change.

Supran said he hoped the work would prove useful to these accountability efforts.

Jessica Wentz, a nonresident senior fellow at the Sabin Center for Climate Change Law at Columbia University, said there’s a good chance it will.

Litigants will have to cross two legal thresholds, Wentz said, proving that Exxon intentionally misled the public about climate change, and that it was foreseeable that continuing to burn the company’s products would cause harm. The new paper will add to a body of evidence that could support both claims, she said, in particular by highlighting the accuracy of the company’s climate projections.

“Not only was it foreseeable to Exxon,” Wentz said, “but it was in fact foreseen.”

The new article is the latest in a series by Supran and Naomi Oreskes, a co-author and professor of the history of science at Harvard, about Exxon’s messaging on climate change. In 2017, Supran and Oreskes published a peer-reviewed article that applied quantitative analysis to Exxon documents, statements and peer-reviewed papers from the late 1970s into the 2000s. The work concluded that while internal documents largely acknowledged that global warming was caused by humans, public-facing statements from the same period instead stressed doubt and uncertainties about the science.

In 2021, the researchers published an article showing that Exxon’s public statements began to shift in the 2000s away from directly questioning the science and towards more subtle messaging on climate change that minimized the severity of climate impacts and transferred responsibility for action to consumers.

The article published Thursday, like those before it, drew on internal corporate documents, including some first published by Inside Climate News, and peer-reviewed papers. This time, however, Supran and Oreskes worked with Stefan Rahmstorf, a climate scientist at the Potsdam Institute for Climate Impact Research in Germany, to analyze all the climate projections included in those documents.

The researchers found that company scientists predicted overall warming with a degree of certainty that left no doubt that the burning of fossil fuel was warming the planet. They also accurately predicted that human-induced warming would be detectable by 2000, a fact confirmed that year by the United Nations Intergovernmental Panel on Climate Change.

Yet in 2004, Exxon said publicly that “scientific uncertainties continue to limit our ability to make objective, quantitative determinations” about humanity’s role in climate change.

As late as 2013, the article notes, then-chief executive Rex Tillerson said “the facts remain there are uncertainties around the climate… what the principal drivers of climate change are.”

By this point, numerous projections either produced by or published in Exxon’s own reports had already been corroborated, accurately predicting that fossil fuel combustion was warming the climate.

“They were directly contradicting their predictions from decades past,” Supran said. He added that the company’s own graphs showing future warming, “don’t just communicate the crisis, they confirm complicity.”

Todd Spitler, an Exxon spokesperson, rejected Supran’s accusation. “Those who talk about how ‘Exxon Knew’ are wrong in their conclusions,” he said in an email. Spitler also referred to a 2019 decision by a New York State judge that cleared the company of charges that it had misled investors about the risks it faced from climate change.

Supran’s work was funded partly with a grant from the Rockefeller Family Fund, which has given money to organizations supporting lawsuits filed against Exxon and other companies, and to Inside Climate News. In a disclosure published with the article, Oreskes also said she previously served as a paid consultant to Sher Edling, a law firm that has filed complaints against Exxon.

Kevin Trenberth, a climate scientist and distinguished scholar at the National Center for Atmospheric Research, said in an email that it has already been clear even before this paper that Exxon’s own scientists were closely involved with leading climate science in the late 1900s. But he added that the paper, “again shows the huge power of money that the industry used to serve their own ends and not those of the public, the nation or the international community. And of course this continues today.” 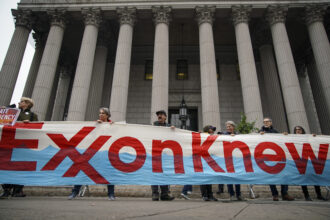 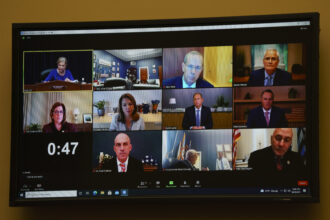