A critical piece of the funding needed to transition to a low-carbon world—bond financing for climate-saving projects—grew by 20 percent to nearly $600 billion compared to last year, but it’s still short of what’s needed, according to a new report.

“It has grown 20 percent, which is good. It’s not good enough, but it’s a start,” said Sean Kidney, chief executive of the nonprofit Climate Bonds Initiative (CBI), which wrote the report and is helping create the market in bond financing for green and climate-related projects.

The push to rev up the climate bond market is part of the worldwide effort to keep climate change to 2 degrees Celsius warmer than pre-industrial levels. To do that, countries need to eventually zero out fossil fuel burning, and that requires a broad and immediate shift to clean and renewable energy sources.

Researchers at the International Energy Agency estimated last year that it would take about $53 trillion in infrastructure, energy efficiency and other projects to get the world on track to meet the 2-degree promise. An earlier IEA estimate put that figure at $36 trillion over 36 years—a projection that was shortened to a “Clean Trillion” of investment per year.

And yet the world is less than a third of the way there. Climate-related bonds are an answer to filling the gap because the overall bond market is worth an estimated $100 trillion—which means it has more money flowing through it than the world’s stock exchanges, according to the CBI. The United States is the largest bond market, accounting for about one-third of the total.

CBI’s report said the market for climate-aligned bonds totaled $597.7 billion in June, with bonds that are labeled “green” making up 11 percent of the overall total. To qualify for the green designation, bond sellers have to use 100 percent of the bond proceeds on assets or projects that meet certain guidelines. Climate bonds that don’t carry the label are typically using only a portion of the proceeds for projects that fit the definition for green.

Because the green bonds are focused solely on investments that address climate change, Kidney and others have been pushing especially hard to build that portion of the young market. And while it’s still growing fast, the market could grow much faster if there were more green bonds available for investors to buy. The report, the most extensive accounting of climate-related bonds, was commissioned by HSBC’s Climate Change Centre of Excellence.

“There’s no problem of demand. There is now no shortage of capital chasing deals in this area—what we’re missing is deal flow,” said Kidney, one of the report’s authors. “I’ve got every investment bank and lots of commercial investors who’ve now raised funds [for green bonds], and they just can’t find places to put their money. So that’s what we’ve got to address this year.”

Kidney and others had hoped the fast-growing green bond market, now at $65.9 billion, would have topped $100 billion by now, but growth was slowed by two factors.  China’s entry into the green market, which will bring with it big offerings to finance its planned expansion in renewable energy, was delayed until this fall; and U.S. corporations have been slow to embrace the new bond market.

“The U.S. corporate market is a big market, so the fact that it’s not playing its part is worrying for us all,” Kidney said. “We’ve seen quite a lot of municipal issuance out of the U.S., though, and we think that’s going to be a huge story moving forward, so it’s a good start.”

The most recent U.S. green bond issuance came from the San Francisco Public Utilities Commission, which issued $32.9 million in green municipal bonds to finance clean power projects for the city, according to CBI.

Low-carbon transport projects, such as building commuter rail lines, represented 70 percent of the $597.7 total climate-aligned bonds, followed by clean energy at 20 percent, and the final 10 percent split among multi-sector bonds, or bonds for buildings and industry, agriculture and forestry, waste and pollution, and water, according to the report.

India and China are beginning to tap the green bond market, and their involvement should boost the overall volume. India has set a target of 165 gigawatts of new renewable energy capacity by 2022, and the report suggests that the nation will need to finance $70 billion in debt to accomplish it.

In a sign that the green bond market is becoming more like its traditional bond brethren, climate-related bonds have become more diversified, offering investors more choice. High-yield green bonds have been issued by recycler Paprc and green energy companies NRG Yield and Abengoa Greenfield, and Terraform Power. There are bonds being issued in 23 different currencies. The majority of the bonds earn investment-grade status from ratings agencies such as Standard and Poor’s.

“This report shows that there are investments opportunities available today, at scale, for those investors who are concerned about climate change and want to start [investing] in a way that will still meet their yield and ratings requirements and fiduciary obligations,” Kidney said. “It can be done today.” 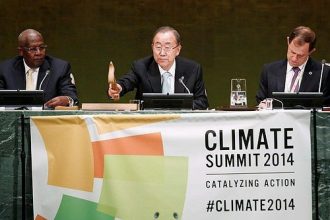