James Hansen, a climate scientist who shook Washington when he told Congress 33 years ago that human emissions of greenhouse gases were cooking the planet, is now warning that he expects the rate of global warming to double in the next 20 years.

While still warning that it is carbon dioxide and methane that are driving global warming, Hansen said that, in this case, warming is being accelerated by the decline of other industrial pollutants that they’ve cleaned from it.

Plunging sulfate aerosol emissions from industrial sources, particularly shipping, could lead global temperatures to surge well beyond the levels prescribed by the Paris Climate Agreement as soon as 2040 “unless appropriate countermeasures are taken,” Hansen wrote, together with Makiko Sato, in a monthly temperature analysis published in August by the Climate Science, Awareness and Solutions center at Columbia University’s Earth Institute.

Since his Congressional testimony rattled Washington, D.C. a generation ago, Hansen’s climate warnings have grown more urgent, but they are still mostly unheeded. In 2006, when he was head of NASA’s Goddard Institute for Space Studies, George W. Bush’s administration tried to stop him from speaking out about the need to reduce greenhouse gas emissions.

After 46 years with NASA, Hansen left in 2013 to focus on political and legal efforts to limit warming. His granddaughter, Sophie Kivlehan, is one of 21 young plaintiffs suing the U.S. government for violating their constitutional rights to life, liberty and property by failing to take adequate action to address the human causes of climate change, such as greenhouse gas emissions from transportation, industry and electricity generation.

“Something is going on in addition to greenhouse warming,” Hansen wrote, noting that July’s average global temperature soared to its second-highest reading on record even though the Pacific Ocean is in a cooling La Niña phase that temporarily dampens signs of warming. Between now and 2040, he wrote that he expects the climate’s rate of warming to double in an “acceleration that can be traced to aerosols.”

That acceleration could lead to total warming of 2 degrees Celsius by 2040, the upper limit of the temperature range that countries in the Paris accord agreed was needed to prevent disastrous impacts from climate change. What’s more, Hansen and other researchers said the processes leading to the acceleration are not adequately measured, and some of the tools needed to gauge them aren’t even in place.

Aerosols are microscopic airborne particles from natural and human sources, including smoke, pollen, fine minerals, volcanoes and even plankton-laced sea spray. Depending on how light or dark they are, how high in the atmosphere they float, how they interact with clouds and how long they persist, they have different effects on climate.

Hansen and other scientists have paid close attention to one type—sulfate aerosols generated primarily by industrial processes, including fossil fuel burning, because they brighten some clouds by increasing the number of reflective droplets they hold. Those clouds cool the Earth by reflecting some of the sun’s light and heat away from its surface.

Some volcanic eruptions can have similar effects, including a well-documented short-term global cooling that occurred when aerosols from the 1991 Mt, Pinatubo eruption cloaked the Earth, reducing the average global surface temperature by about 0.4 degrees Celsius for two years.

Other recent research also shows that the climate is highly sensitive to aerosol emissions from burning fossil fuels for power and transportation. One study showed how the sharp drop in aerosol emissions during the early global response to the coronavirus pandemic caused short-term regional temperature increases.

For much of the industrial age, that interaction of clouds and industrial aerosols has masked part of the heat-trapping effect of greenhouse gases. But since the 1970s, sulphate aerosol emissions have declined under increasingly strict and widespread air pollution laws.

Regional studies show reflective clouds over oceans dwindling, allowing more incoming solar energy to reach the oceans, which have been gaining heat at the fastest rate on record in recent years, Hansen said. That can only be explained, he added, “by the one huge climate forcing that we have chosen not to measure,” the reduction of atmospheric aerosols from improved regulation of pollutants like sulfates.

Scientists study the microphysics of cloud and aerosol interactions and use models to estimate how the two interact on a broad scale. But global satellite observations over time that could back up those projections are lacking, although not for lack of trying, Hansen said.

While Hansen was with NASA—where he worked when he testified to Congress that human emissions of greenhouse gases were warming the climate—he pushed for the deployment of satellites with instruments specifically designed to measure the effects of aerosols on the climate. And it “almost happened against the wishes of NASA headquarters,” he said.

But NASA’s Glory satellite mission exploded before reaching orbit. That left a gap in observations of the particles’ effects on the climate during a critical time period when greenhouse gas emissions accelerated, while aerosol emissions slowed. The loss of the satellite left researchers especially blind to geographic nuances, like how reductions of aerosols from shipping affect clouds over the oceans.

“Indeed, currently there are no sufficient satellite measurements to quantify aerosol radiative forcing and how it changes with time,” said Otto Hasekamp, an atmospheric scientist with the Netherlands Institute for Space Research. The latest science report from the Intergovernmental Panel on Climate Change acknowledged that the cooling effect of aerosols is probably much stronger than previously estimated, and that reduced emissions of aerosols will speed up warming, Hasekamp said.

Hansen said, “Aerosols were the focus of my career, beginning with Mt. Agung, which exploded while I was a senior in college.” The 1963 eruption in Indonesia spewed a huge volume of sulphate aerosols that had a significant short-term cooling effect on the global climate.

“By observing the effect of the aerosols on the lunar eclipse later that year I obtained data for a masters degree in astronomy,” he said, outlining his subsequent role as a leading climate researcher and his early, clear warning on Capitol Hill about global warming. “Then I got interested in the aerosols on Venus… and so on.”

Despite the loss of the Glory satellite, no additional missions specifically aimed at monitoring aerosols were planned for several years, partly because of scientific differences within NASA and also partly because Earth observation missions became fodder for partisan political infighting, as conservative Republican senators backed by the fossil fuel industry politicized climate policy. Hansen describes the political battles in a draft chapter of his forthcoming book, Sophie’s Planet.

Upcoming missions like the 2024 NASA PACE mission will supply new data, but they can’t observe what happened in the last critical 20 years. The new instruments will “result in improved quantification of aerosol radiative forcing,” Hasekamp said. Then, in the late 2020s, NASA plans to launch the ATMOS mission to focus on aerosols and clouds and build on the PACE measurements, he added. And the European Space Agency’s Earthcare mission in 2023 will also measure aerosols.

It’s not just a lack of observations from space that’s led to a miscalculation of the effect of aerosols on the climate but also the difficulty of measuring solar radiation that penetrates deep into the sea, said Leon Simons, an independent climate policy analyst and a Netherlands board member of the Club of Rome, a global think tank best known for its 1972 The Limits to Growth report.

He said that, based on his understanding of the climate system, the effect of reducing sulfate emissions over the world’s oceans is “significantly underestimated.” One sign may be that regions with high shipping density—where pollution controls have brought steeper reductions in the emission of sulphate aerosols—also seem to be experiencing “additional warming,” he added.

“What Hansen and Sato show and what first measurements of the Earth’s Energy Balance indicate, is that cleaning up the atmosphere comes at the price of being faced with the long overdue global warming from greenhouse gases emitted in the past 200 yrs.,” he wrote on Twitter after reading Hansen’s article on the “Faustian bargain” of reducing aerosol emissions. “The Devil collects.”

A doubling of the rate of global warming would put the planet in the fast lane of glacial melting, sea level rise and coral reef ecosystem die-offs, as well as escalating heatwaves, droughts and floods. But that future is not yet set in stone, said Michael Mann, a climate scientist at Penn State.

He said Hansen’s prediction appears inconsistent with the scientific literature assessed by the Intergovernmental Panel on Climate Change. The IPCC’s latest report advises “that reductions of carbon emissions by 50 percent over the next decade and net-zero by 2100, along with a ramp-down in both aerosols and other short-term agents, including black carbon and other trace anthropogenic greenhouse gases, stabilizes warming well below 2 degrees Celsius,” Mann said.

But the IPCC report also highlighted that declining aerosol pollution will speed warming.

“The removal of air pollution, either through air quality measures or because combustion processes are phased out to get rid of CO2, will result in an increase in the resulting rate of warming,” said climate scientist and IPCC report author Joeri Rogelj, director of research at the Imperial College London’s Grantham Institute.

There’s a fix for at least some of this short-term increase in the rate of warming, he said.

“The only measures that can counteract this increased rate of warming over the next decades are methane reductions,” Rogelj said. “I just want to highlight that methane reductions have always been part of the portfolio of greenhouse gas emissions reductions that are necessary to meet the goals of the Paris Agreement. This new evidence only further emphasizes this need.”

Even with better data coming in, it will be hard to make super-accurate estimates for the rate that the planet will warm on a decadal time scale, added climate researcher Piers Forster, of the Priestley Centre at the University of Leeds.

“Even with good satellite ocean data it is hard to see, as we are really looking for aerosol-cloud effects and these have so much seasonal and annual variability,” Forster said. “We need to observe for a long time to see a trend.”

But climate models suggest there are several factors that could accelerate warming, and “aerosol recovery looks like part of the reason for sure,” he said. It’s also possible that the cooling effect lost as sulphate aerosols are reduced could be replaced by nitrogen-based aerosols from another source, like agriculture, adding even more uncertainty, Forster added.

Even with all the unanswered questions, he said he is confident that the acceleration of global warming can be avoided.

“The IPCC report and other research show that, if we cut greenhouse gases, and especially methane, the high rates need not manifest themselves,” he said. “So we have a choice.” 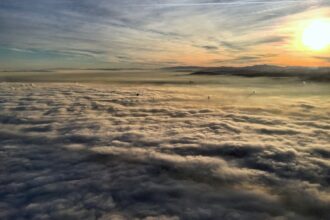 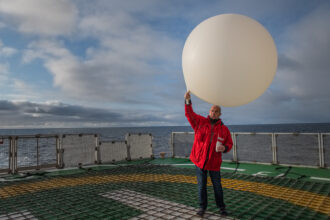