A federal judge on Monday dismissed a Canadian logging company’s lawsuit against Greenpeace and another activist group that accused them of running a criminal enterprise through their environmental campaigns.

The case is one of two brought by corporations against the environmental group and several of its peers that invoke federal racketeering law. Legal and environmental experts have described the legal tactic as a new and particularly dangerous example of corporations and wealthy individuals attempting to silence opponents.

“We are pleased the court unequivocally threw out this attempt to abuse our legal system and silence legitimate criticism,” Greenpeace USA’s general counsel, Tom Wetterer, said in a statement.

While Judge Jon S. Tigar dismissed all the claims against Greenpeace and Stand, the other environmental group named in the suit, the case is not dead yet. Tigar’s ruling allows the plaintiff, Resolute Forest Products, to file an amended complaint within the next three weeks.

“The Court dismissed the complaint for failure to allege certain elements of our claims with sufficient detail,” Michael Bowe, Resolute’s lawyer, said in an email. “We will correct those purported deficiencies in an amendment, and proceed with the case.”

Resolute filed the lawsuit against Greenpeace and Stand last year, using federal racketeering law to say the groups were conspiring to defame the company, extort its customers and defraud the groups’ donors. The case was followed in August by a second, similar lawsuit brought by Energy Transfer Partners, the company behind the Dakota Access Pipeline, against Greenpeace and two other groups. Bowe is representing both companies.

In Monday’s ruling in California, Tigar granted motions from the defendants seeking to dismiss all the claims against them, writing that Resolute failed to meet numerous standards for the various claims. In asserting that Greenpeace was defaming the company by calling it a “forest destroyer,” for example, he said Resolute took “an overly literal approach to obviously overemphatic speech.” Tigar said Resolute failed to provide enough detail of the alleged fraud to sue the groups under the Racketeer Influenced and Corrupt Organizations (RICO) Act, a federal conspiracy law was created to ensnare mobsters.

The judge also said the defendants were entitled to recover a portion of their attorneys fees.

Wetterer said the decision, “should be a clear indication that Energy Transfer’s case has no future.”

Greenpeace and the other defendants in that case will use similar arguments to seek the dismissal of the Energy Transfer lawsuit, which was filed in federal court in North Dakota.

Read more here about the legal tactic used against the environmental groups and how the long-shot cases are having a chilling effect. 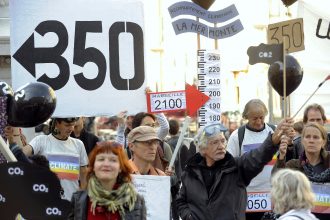