New Jersey became the latest U.S. state to sue the fossil fuel industry over climate change, alleging it knew for decades that emissions from its products contributed to global warming, but lied to protect its profits and deter efforts to curb greenhouse gases.

State Attorney General Matthew Platkin announced a suit on Tuesday against five major oil companies and their trade association, the American Petroleum Institute, saying the industry failed to warn the public that its products were dangerous, and sought instead to sow public doubts that fossil fuel emissions were linked to climate change.

“They went to great lengths to hide the truth and mislead the people of New Jersey and the world,” Platkin said, in launching the suit against ExxonMobil,  Shell, Chevron, ConocoPhillips, BP and the API. “These companies put their profits ahead of our safety.”

The suit, filed in New Jersey Superior Court, seeks an injunction ordering the companies to “stop deceiving” New Jersey consumers about the destructive environmental impacts of fossil fuels. It is also asking the court to impose unspecified monetary penalties for the loss of natural resources such as coastal wetlands that are shrinking as seas rise in response to the changing climate.

Casey Norton, a spokesperson for ExxonMobil, said the suit will do nothing to combat climate change.

“Legal proceedings like this waste millions of dollars of taxpayer money and do nothing to advance meaningful actions that reduce the risk of climate change,” Norton said in a statement. “ExxonMobil will continue to invest in efforts to reduce greenhouse gas emissions while meeting society’s growing demand for energy.”

Shell and the American Petroleum Institute did not immediately respond to requests for comment.

The action follows around 20 similar suits by states, cities and counties around the United States, seeking compensation from the fossil fuel industry for damages such as sea-level rise, bigger storms, wildfires and flooding, all attributable to climate change.

The earlier plaintiffs include nearby Delaware, a low-lying coastal state which in 2020 sued 31 fossil fuel companies, claiming their products have contributed to sea-level rise that is forecast to inundate large areas of the state in coming decades.

Early last year, the City of Annapolis, Maryland,  sued some two dozen fossil fuel companies, saying their products have contributed to the city’s high rate of nuisance flooding, and that they had engaged in so-called greenwashing in an attempt to convince the public that they were taking climate change seriously.

New Jersey’s suit, too, accuses the defendants of making “negligibly small investments” in an attempt to present themselves as environmental stewards helping to fight climate change.

The complaint says the companies fell short of their legal obligations to warn consumers about dangers arising from the use of their products. It also alleges negligence and impairment of the public trust, among other charges.

New Jersey’s suit comes about two weeks before the 10th anniversary of Hurricane Sandy, a monster storm that destroyed hundreds of homes and businesses along the densely populated Jersey Shore, and was blamed for some three dozen deaths. In September 2021, many inland areas saw record flooding from Tropical Storm Ida which killed 30 people and caused millions of dollars in damage.

“Within 10 years, New Jersey experienced two of the most devastating, life-altering storms in our history,” said Shawn LaTourette, commissioner of the state’s Department of Environmental Protection, at a ceremony to announce the lawsuit. “That’s in no small part because of our state’s, our nation’s and indeed the world’s addiction to fossil fuels.”

LaTourette called New Jersey “ground zero” for the effects of climate change, and said its communities are continually recovering from coastal and inland floods, droughts, wildfires and extreme heat. The state is currently in a drought watch, is affected by harmful algal blooms in some of its lakes and in June was hit by a wildfire that burned 15,000 acres of the Pinelands area, he said.

State officials warn that more and bigger storms can be expected as seas rise and global temperatures increase in coming decades. In 2019, state officials and Rutgers University forecast that sea levels along the New Jersey coast will rise from 2000 levels by up to 1.1 feet by 2030, 2.1 feet by 2050 and 6.3 feet by 2100.

New Jersey and other parts of the U.S. mid-Atlantic states are experiencing sea-level rise at about twice the global rate because the land is sinking at the same time as oceans are rising in response to melting global ice caps and the expansion of water volumes with rising temperatures.

The new suit alleges that the oil and gas companies researched the link between fossil-fuel consumption and climate change as early as the 1950s and by the mid-1960s gained a “comprehensive understanding” of how oil and gas use created adverse climate impacts.

It argued that the defendants’ actions disproportionately harmed people living in low-income areas, including communities of color that are subject to cumulative environmental and public health threats because of climate change.

“Taxpayers will be saddled with billions in expenses to protect communities … and to mitigate those harms by transitioning to non-fossil fuel energy generation—costs that should be borne by the defendants,” the Attorney General’s office said in a statement. 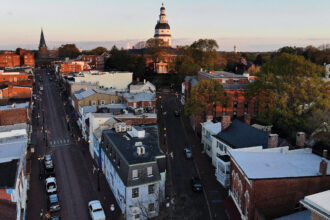