Rebuilding the U.S. energy industry to substantially reduce reliance on carbon-based fuels may result in a net gain of 2 million jobs by 2050 while increasing disposable household income, according to a new study sponsored by a nonprofit that advocates clean energy.

The report, by the Virginia-based consulting firm ICF International, found that a large-scale shift to renewable sources for generating electricity could increase U.S. employment by 1 million jobs by 2030 and 2 million by 2050, even after accounting for job losses related to fossil fuels. The transition would also provide between $300 and $650 in additional disposable income per household annually in 2050, the report found.

The findings, released in the weeks before world leaders are to meet in Paris to negotiate a global climate change agreement, undermine one of the main fossil fuel industry objections to cracking down on carbon pollution: that it would cost too many jobs and cripple the U.S. economy. Burning carbon-heavy coal, oil and natural gas has dramatically increased the amount of carbon dioxide in the atmosphere, leading to potentially catastrophic global warming.

“While the study does paint an overall rosy picture it also shows that there would be some losses in the fossil fuel sector compared to business-as-usual,” said Bansari Saha, Ph.D., the author of the report and a senior manager at ICF. “But on the whole we’re better off. There’s always a concern that we can’t actually shift to clean energy without hurting the economy. But it does look like you can under the scenarios modeled here, and you can do it with an overall benefit to the economy.”

The study is the first to model the economy-wide benefits of switching to cleaner fuels. The findings echo other recent studies that said there would be many times more jobs created from a clean energy transformation than would be lost. An analysis by economists found that the EPA’s Clean Power Plan, designed to slash power plant emissions, would generate more than a quarter-million additional jobs.

The latest report was commissioned by NextGen Climate America, a nonprofit led by Tom Steyer, the billionaire philanthropist and environmentalist. Last month, the organization’s SuperPAC launched a campaign asking presidential candidates to lay out a plan to supply 50 percent of the country’s power needs using clean energy by 2030.

The ICF analysis relied on data from a study by Energy and Environmental Economics, an energy consultancy. Researchers used the data to model four pathways under which the U.S. could take carbon out of its energy mix. ICF’s analysis broke down the impact of two specific scenarios on the economy: switching almost entirely to renewables, and using a mix of renewables, nuclear energy and natural gas.

The analysis assumed that the transition will include increased energy efficiency, reduced greenhouse gas emissions in the power industry and a switch from internal combustion engines to electric motors in vehicles. Researchers charted the economic benefits of each case from 2020 to 2050.

Sharply reducing the U.S. economy’s reliance on carbon fuels will require large-scale infrastructure investments in the utility and transportation industries, which will provide returns on investment, according to the report. Annual investments under both scenarios would be $150 billion to $200 billion until 2030. After that, the higher-renewables scenario would require increasing investments until 2050, according to the study.

A majority of the 2 million new jobs would be in the construction, utility and manufacturing industries, according to the analysis. The utility business will see the biggest increase in jobs because a shift to cleaner energy sources will mean an increased reliance on the electric transmission grid. As households shift from gas water heaters to electric heaters and as more electric vehicles hit the road, there will be a higher demand for electricity, the report predicts.

“You move all your energy needs to the grid and let the utility sector figure out how to generate that electricity efficiently,” Saha said.

The analysis includes only the economic benefits from shifting to renewables and does not consider the public health and environmental results of avoiding use of fossil fuels. It also doesn’t attempt to take into account the negative effects of climate change on the U.S. economy.

Saha said that given the wide range of unknowns, there could be some variations in the number of jobs created and the total economic benefits.

“The impact could be significantly lower, but can it switch to negative?” he said. “No, based on the conditions in this analysis, it doesn’t look like it could.” 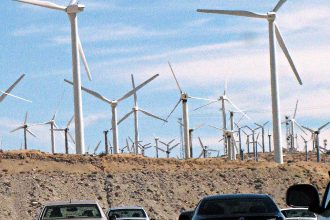