The slowdown of a key ocean current could release methane that is frozen in layers of organic seabed sediments along some of the world’s coastlines, a new study shows.

Cold temperatures and high pressure on sea floors currently sequester about one-sixth of the world’s methane, a potent but short-lived greenhouse gas, in an ice-like form called methane hydrate, or clathrates. Sudden thawing of those clathrates could result in a surge of methane emissions that would spike the planet’s fever. The new research, published today in the Proceedings of the National Academy of Sciences, shows that some of the shallower layers in the Atlantic Ocean could be more vulnerable than previously thought to warming that could release that methane, and that such events have happened in the distant past.

The trigger for such warming and thawing, according to the study, is a large inflow of fresh, frigid water from melting Arctic ice, which can disrupt the Atlantic Meridional Overturning Current, a slow ocean heat pump, pushing cold water in the Arctic deep down and southward, and warm water to the surface and northward.

Temperature, density and salinity contrasts drive the pump. But in recent decades, the influx of water from rapidly melting Arctic ice, especially the Greenland Ice Sheet, appears to be weakening the current, which could warm the ocean at depths of 300 to 1,300 meters to destabilize methane hydrates buried 20 to 30 feet deep in the seabed.

It’s happened before, said University of California, Santa Barbara climate scientist Syee Weldeab, who led the detailed analysis of ocean and coastal conditions in the Gulf of Guinea. The study covers a 500-year slice of time during the Eemian Age, about 125,000 years ago.

The global average temperature was about 1 to 2 degrees Celsius warmer than now, due to changes in the amount of sunlight reaching Earth. The new study’s analysis of trace elements in the shells of ancient ocean microorganisms shows that was enough to free some methane from its icy state, he said.

The main message of the study is that researchers need to consider temperature changes greater than they are currently looking at, Weldeab said, due to the possibility of unexpected feedbacks that can magnify warming like changing currents or methane releases brought on by higher temperatures.

“It’s not only the warming, right, but the feedback process, the loop process of warming,” he said, identifying the disruption of the Atlantic heat pump as the cause for a “remarkably large warming” of 6.8 degrees Celsius in water between 300 and 1,300 meters deep in the ancient history of the study area.

That amount of warming was enough to thaw frozen methane, the authors noted in the paper, and the climate events and feedback loops they documented can serve as an analog for the warming the planet is currently enduring.

Weldeab said that, during the era they studied, the Greenland Ice Sheet melted to a smaller size than today, and that its meltwater “basically disturbed ocean circulation,” causing greater warming at depths that can thaw frozen methane hydrates.

Warming of 1 to 3 degrees Celsius, as many models currently predict, wouldn’t thaw the methane hydrates, Weldeab said, leading some researchers to discount the possibility of a surge of the greenhouse gas from the sea floor.

“But there is a possibility for larger warming,” he said “That’s why we need to pay attention.”

The study is significant because it identifies a new mechanism by which waters at middle level in the ocean could warm up regionally beyond expected average changes, said Australian climate scientist Pep Canadell, who was not involved in the new study.

But current climate projections Intergovernmental Panel on Climate Change, aside from those based on the highest emissions scenarios, show intermediate-depth ocean temperatures are unlikely to “cross the threshold of hydrate instability,” said Canadell, executive director of the Global Carbon Project, and a co-lead author of an IPCC report chapter that covers methane hydrates. “However, the new study makes the remote prospect for a very low-probability, high- impact event on hydrate destabilization more real than previously thought.”

Chapter 5 of the IPCC’s August 2021 physical science report concluded that “emissions  from subsea and permafrost methane hydrates are not expected to change substantially in the 21st century.”

While the paper adds to the body of knowledge about the relationship of seabed and ocean chemistry to climate change, it didn’t consider all the geologic mechanisms required to deliver gas from the sea floor to the atmosphere, said Warren Wood, a methane hydrate expert who studies geology and geophysics with the U.S. Naval Research Laboratory in Stennis, Mississippi.

“Release of all the gas along an entire continental margin suddenly enough to reach the atmosphere would require an extremely rare and catastrophic event,” he said. “This kind of event is alluded to by the authors, but without evidence.”

Richard Alley, a Penn State climate scientist who has been studying ice sheets and glaciers for decades, said the paper holds a lot of important data, but noted that not all of the greenhouse gas that could be released from the seabed by warming would end up in the atmosphere to further warm the climate.

“Much, and perhaps almost all, of the carbon in the methane ended up in the ocean,” he said. “Some of it oxidized to become carbon dioxide, and some of it went into the carbonate of the shells that were studied, and the remaining big question is how much of that methane got into the atmosphere.”

Methane releases from the thawing sea floor due to warming oceans would probably happen much slower than those from other emissions sources driving climate change, such as power plants burning fossil fuels, he added, “limiting the near-future importance of any similar event in our warming world.”

Weldeab said his study of the past is not an exact prediction for the future, but cautioned against ignoring such clues in the ancient climate, especially since many climate impacts are outrunning the projections generated by models.

“Models sometimes overestimate and sometimes underestimate, and this case seems like an underestimation to me,” he said. “We’re bringing basically some perspective and an example from a time that is not so remote, when the world was as warm as what we’re projected to have in the next 80 to 100 years, and when the Greenland Ice Sheet was much smaller.” 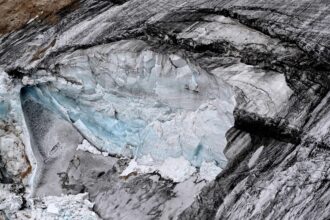 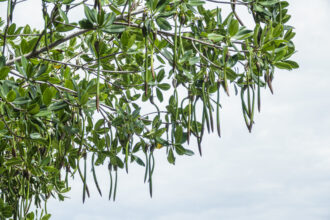