New York City is vulnerable to rising seas and larger, more powerful storms that result in more frequent and intense flooding and what was once a 500-year flood prior to human-induced climate change now occurs on average once every 24 years. This is according to a study published Monday in the Proceedings of the National Academy of Sciences.

“Flood heights are increasing and have increased since the pre-anthropogenic era, not only because of rising sea levels but also because of the impact that climate change is having on tropical cyclones,” said lead author Andra Reed of Penn State University.

Reed and colleagues made their conclusions based on climate models that simulated tropical storms and subsequent flooding for the region beginning in 850. They found that average flood height increased by more than 4 feet from 850 to 2005.

When Hurricane Sandy hit New York in 2012, it caused an estimated $50 billion in damage and destroyed at least 650,000 houses. Flooding from the storm reached a height of 9.2 feet in Battery Park. Prior to 1800, such a flood could be expected to hit the city every 3,000 years. Today, a flood of that magnitude will occur on average every 130 years, Reed said. By comparison, storms that are now anticipated roughly every 24 years will have a height of 7.4 feet in Battery Park.

The findings should serve as a wake up call for flood policies in the U.S. and elsewhere, said Melanie Gall, a University of South Carolina professor who studies disaster risk and emergency management.

“Our planning is not designed to look forward,” Gall said. “When you look at flood insurance or how flood zones are mapped, it is always based on past events. It never looks at how storm surge will change in the future. There needs to be more proactive planning.”

Continuing development in New York and other coastal areas is also making the impact of such floods worse, similar to how water in a bathtub rises when displaced by a person entering the tub.

“The area that will be affected is larger because there is more development,” Gall said.

While many cities and states have yet to adopt forward-looking policies that address the increasing effects of climate change, New York has long led on the issue. After Hurricane Sandy, then-mayor Michael Bloomberg led an unprecedented effort to safeguard the city from the effects of climate change. Resiliency efforts have continued under Mayor Bill de Blasio, who on August 27 committed $100 million for flood protection efforts in Lower Manhattan as part of the city’s OneNYC resiliency program.

“New York City continues to advance its $20 billion OneNYC resiliency program, based on the best available science from our academic colleagues at the New York City Panel on Climate Change,” Daniel Zarrilli, director of the mayor’s office of recovery and resiliency, said in a statement.

The current study, while focusing on New York, is the latest of several  papers pointing to an increased risk of more frequent and devastating storms worldwide.

“No matter what way you cut and slice the pie, with anthropogenic changes there is an increased risk for these sorts of severe events to occur,” said Greg Holland a climate and hurricane researcher at the National Center for Atmospheric Research in Boulder, Colo.

Holland said part of the problem is that storms, including Sandy which had relatively low wind speeds, are getting larger and sticking around longer.

“There is plenty of time for the water to penetrate inland and also there is a very good chance that the water will still be around when high tide comes by,” Holland said.

The current study did not project future flooding but with sea levels anticipated to continue rising, coastal areas will experience increasingly high waters during storms.

“There is a consistent message appearing and at the very minimum planning and consideration for future infrastructure needs to take it into account,” Holland said. 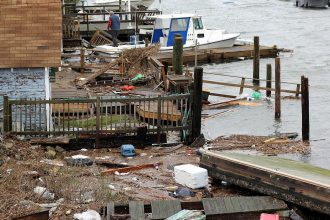