The number of Atlantic cod in the Gulf of Maine has hit an all-time low in recent years despite strong fishing regulations, and scientists now attribute it to rapidly rising water temperatures, according to a study published Thursday in the journal Science.

Sea surface temperatures have increased in the Gulf of Maine faster than almost anywhere else in the world, causing the cold-water species that had already been decimated by centuries of overfishing to reach the verge of collapse.

Strict quotas placed on New England’s cod fishery in 2010 were implemented to increase their numbers , but the limits failed to take into account rising water temperatures.

“Our management forecasts were failing because we were not accounting for this very rapid change in temperature,” said Andrew Thomas, an oceanographer at the University of Maine and a co-author of the study.

“For the last 10 years we are in the 0.1 percent of the global ocean in terms of how fast our piece of ocean is changing,” Thomas said.

The region’s rapid warming since 2004 is too short of a time period to determine if it is a trend that will continue, Thomas said, “but if you are a fish in the Gulf of Maine that is what you have experienced.”

The incredibly fast rate of warming in the waters off  New England is largely due to a northward shift in the Gulf Stream, an ocean current bringing warm water up from the tip of Florida. The change in the Gulf Stream limits the amount of cold water coming into the Gulf of Maine from the north.

Elsewhere, however, cod numbers are increasing as a result of climate change.

Estimates of Cod in the Barents Sea off the northern coasts of Norway and Russia show a doubling of the population in recent years. The increase in what is the largest Atlantic cod fishery in the world is due in part to rising temperatures, which have increased by 2.7 degrees since the late 1970s, according to a study published last year in the Proceedings of the National Academy of Sciences .

“The Barents Sea cod reached its all time high in 2013 and has expanded northward almost at the fringe of the Arctic Ocean,” Svein Sundby an ecologist at the Institute of Marine Research in Bergen, Norway said.

Sundby said the relative water temperatures of the two regions is the reason for the opposing responses to a warming climate by different populations of the same species.

“The Gulf of Maine is the southern fringe of Atlantic cod stocks, it is in the absolutely warmest tolerable region for Atlantic cod,” Sundby said. “Over on this side in the [Barents Sea] we are at the lowest fringe of temperature for cod stocks.”

The ability of warming temperatures to boost cod populations in the far north, however, has its limits.

“Cod is a shelf species, it cannot advance into the Arctic Ocean because that is a large, deep region,” Sundby said. “At present, it’s positive, but in future climate change we can not expect it to be.”

The key to saving the cod, researchers say, is for fishery managers to take such temperature changes into account.

“We are going to have to build in these rapid temperature changes into our forecast, otherwise the best management decisions are not going to be good enough,” Thomas said. 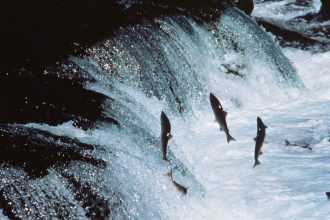