The Trump administration has issued the first permit to drill in federal waters of the U.S. Arctic since Shell’s failed attempt ended in 2015.

As soon as December, the Italian oil company Eni could begin drilling exploratory wells on a lease that was set to expire at the end of the year.

The approval came after “a thorough and complete review of Eni’s well design, testing procedures and safety protocol,” according to Mark Fesmire, the director Alaska region of the Bureau of Safety and Environmental Enforcement. “Exploration must be conducted safely, and responsibly in relation to the Arctic environment and we will continue to engage Eni as they move forward with drilling its exploratory well,” he said.

There is widespread opposition to offshore drilling in the Arctic among conservationists and some native Alaskans, who fear it could impact marine animals that migrate through the area, including bowhead whales that subsistence hunters rely on for survival. Scientific research also points to the need to keep most fossil fuels in the ground to avert the worst consequences of climate change; a 2015 study in the journal Nature identified oil reserves in the Arctic as unburnable if the world hopes to keep global warming to within 2 degrees of pre-industrial times.

Unlike Shell, which was drilling in the open waters of the Chukchi Sea, Eni plans to access federal waters by drilling more than six miles from an artificial island in the Beaufort Sea. The island, called Spy Island, is in state water and is already home to wells and production facilities.

In 2015, Shell pulled out of a $7 billion Arctic drilling project after failing to find sufficient oil in one exploratory well and after a slew of equipment problems, culminating in the running aground of its drill barge, the Kulluk.

Despite the difference in the projects, Kristen Monsell of the Center for Biological Diversity said any drilling in the Arctic is “an accident waiting to happen.”

“The Trump administration is risking a major oil spill by letting this foreign corporation drill in the unforgiving waters off Alaska,” she said. “Offshore drilling threatens coastal communities and wildlife and will only push us deeper into the climate crisis.”

The approval of Eni’s permit comes as the Trump administration is weighing a proposal by Houston-based Hilcorp to construct a 24-acre artificial island for drilling in federal waters near Prudhoe Bay. The federal Bureau of Oceans and Energy Management (BOEM) expects the proposed project to produce 58,000 barrels a day. Hilcorp made headlines in Alaska this year after a gas pipeline leaked into Cook Inlet for months, revealing the company was unable to stop it while ice covered the water.

The period for public comments on the Hilcorp project was recently extended to Dec. 8.

At the same time, the Senate is expected to vote this week on a tax bill that includes a provision for opening the Arctic National Wildlife Refuge to oil drilling. 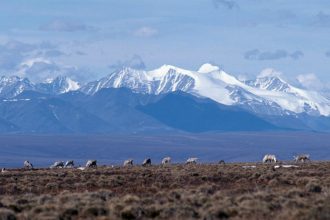 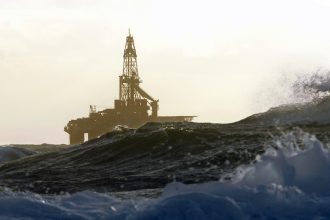