That single statistic—especially jarring just days after the COVID-19 crisis caused the biggest spike in jobless claims in U.S. history—captures why the auto industry isn’t exactly celebrating the Trump administration’s most consequential retreat yet from climate action.

Instead, the industry’s leading trade group responded cautiously that it would review the decision, adding that transformation to address climate change is inevitable.

“Looking to the future, we need policies that support a customer-friendly shift toward… electrified and other highly efficient technologies,” John Bozzella, president of the Alliance for Automotive Innovation, said in a statement.

For the Trump administration, though, the trade-offs of aiding such a transition weren’t worth it, even if it meant more jobs. The analysis by Trump’s Environmental Protection Agency and National Highway Transportation Safety Administration concluded that with more stringent standards forcing added  production of fuel-saving electric and hybrid technology vehicles, there would have been a need for more workers—or higher “net labor utilization.”. But the proposed loosening of standards, resulting in a 1 percent reduction in annual employment, could save the automakers $15 billion, the agencies said.

That money “can be invested by manufacturers into other areas, or passed on to consumers,” the agencies concluded. They justified the move on the basis that it would result in cheaper and safer vehicles, although the EPA’s own Science Advisory Board identified significant weaknesses in that analysis, and the conclusion runs counter to the findings of a National Academies of Science study in 2015.

In the end, the EPA and the transportation safety administration settled on a fuel economy increase of 1.5 percent per year from 2021 to 2026, ratcheting down the 5 percent annual increase that had been required under the standards adopted under President Barack Obama.

While rolling back overall emission standards, the rule does retain incentives for auto manufacturers to phase out the use of hydrofluorocarbons (HFCs), chemical refrigerants and highly potent greenhouse gases that are used in vehicle air conditioning systems.

HFC-134a, the chemical historically used in most automobile air conditioning systems, is 3,710 times more potent as a greenhouse gas than carbon dioxide over a 20-year period. Replacing the super-pollutant with other, more climate friendly alternatives in automobiles and other industries is widely seen as a highly effective, low cost way to address climate change.

HFC emissions in 2018 accounted for 6.5 percent of all greenhouse gas emissions from cars and light duty trucks over a 20-year period, according to an assessment of EPA data for InsideClimate News by the Institute for Governance and Sustainable Development (IGSD).

New vehicles, however, are increasingly using more climate-friendly alternatives, driven by existing EPA incentives that allow manufacturers to count reductions in HFC use toward their larger greenhouse gas emission reduction targets. More than 60 percent of all 2018 model year automobiles sold in the U.S. used hydrofluoroolefin (HFO)-1234yf, a more climate-friendly chemical refrigerant, according to the EPA.

A prior draft of the EPA rollback called for eliminating the incentive for car makers to switch to more climate-friendly chemical refrigerants.  Auto manufacturers and the chemical industry pushed back, noting in public comments to the agency that they had already invested billions of dollars in alternative refrigerants and other incentivized emissions-reduction technologies.

“They got enormous pushback that was across the board from automakers, the chemical industry, environmental groups and states saying, ‘Don’t touch the AC credits,’ so they decided not to,” said Kristen Taddonio, a senior climate and energy advisor at the Institute for Governance and Sustainable Development.  “I think the thing that remains to be seen is how much automakers will need to use these credits now that the [greenhouse gas] standards are lower.”

Trump’s New Rule ‘Driving Us Over a Climate Cliff’

When the Obama administration finalized its standards, it calculated they would prevent more than 6 billion metric tons of greenhouse gases—more than one year’s worth of total U.S. carbon emissions—over the lifetime of the vehicles sold in model years 2012 through 2025. That made it the single largest step that any nation had taken to address global warming.

The automakers agreed to the new standards as part of the $80 billion federal bailout that saved the industry from the brink of collapse. But by the time that Trump was elected, the automakers were seeking more flexibility to continue selling their most profitable vehicles—pick-up trucks and gas guzzling SUVs. They reached out to Trump days after his election in 2016, signaling they were looking for relief.

Instead, the Trump administration has moved to rescind California’s authority and set a looser standard nationwide. “Our final rule puts in place a sensible one national program that strikes the right regulatory balance that protects our environment and sets reasonable targets for the auto industry,” said EPA Administrator Andrew Wheeler. “This rule supports our economy, and the safety of American families.”

Reporting by The New York Times and others indicates that the Trump administration was responding to a concerted campaign by the oil industry to rollback fuel economy.

Margo Oge, who headed the EPA’s transportation office from 1994 to 2012 and was involved in writing the Obama administration rules, said that the Trump administration’s move puts the U.S. dramatically out of step with the rest of the world.

“Globally the goal posts for fuel economy standards and greenhouse gas emissions have moved significantly in the last two years, with major markets moving forward as the U.S. is moving backwards,” she said, noting the European Union’s new car standard of 76 miles per gallon for 2030 and aggressive campaign to produce electric vehicles. “And, adding insult to injury, even EPA’s own analysis found that the new rule will result in a loss of thousands of auto industry jobs,” she said.

States and environmental groups have pledged to take the Trump administration to court over the rollback, and litigation already is underway with California. The issue may take years to reach the Supreme Court, and the auto industry, as it braces for the unknown impact of the COVID-19 economic slowdown, faces the regulatory uncertainty it sought to avoid.

“Of all the bad things President Trump has done to the environment, this is the worst,” said Dan Becker, director of the Center for Auto Safety’s Safe Climate Campaign. “Amid a spiraling health crisis and economic turmoil, Trump is recklessly driving us over a climate cliff.” 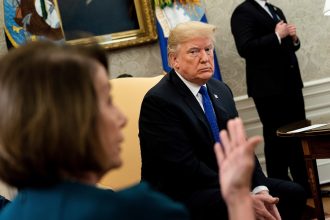 How Trump Is Using Environment Law to Attack California. It’s Not Just About Auto Standards Anymore. 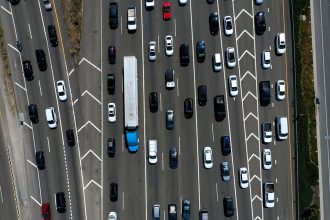