Cloaked in early morning darkness, 13 Greenpeace volunteers climbed over the edge of the St. Johns Bridge in Portland, Ore. on Wednesday and rappelled down climbing ropes so they could hover 100 feet above the Willamette River. Their goal: blocking a Royal Dutch Shell ship en route to support the company’s drilling in the Arctic.

The protesters perched on floating platforms and hammocks for more than 40 hours before being forced down from their positions by the Coast Guard Thursday afternoon. They successfully prompted the icebreaker, the MSV Fennica, to return to port on Thursday, about 30 hours into the protest. But they watched the boat cruise underneath them 10 hours later when police ordered them down.

For Luke Strandquist, the stunt was the latest in a long career of risking arrest to stop environmental destruction across the globe. Strandquist, 32, spoke with InsideClimate News on Thursday afternoon while he was still hovering above the Willamette River. An actor, singer and Bikram yoga teacher in his regular life in New York, he discussed what it is like to be one of Greenpeace’s activists, the toll it can take on his loved ones, and why he continues to break laws to protest on behalf of the environment. He was removed from the bridge just a few hours after the interview, taken into custody and immediately released.

[The interview has been edited for length and clarity.]

InsideClimate News: If we’re looking at pictures of the bridge protest, where are you located?

LS: I’m the furthest to the west side of the bridge, which is away from the park, more toward the railroad and the warehouses.

ICN: Can you tell me a little bit about how you got into protesting?

LS: I’ve been working with Greenpeace for 12 years now. I started as a canvasser, raising money on the street for them. I really tried to avoid going any further than that, but someone convinced me to go to a meeting and it just quickly snowballed from there. I found myself involved in an event to shut down ExxonMobil’s global headquarters in Texas right before their general shareholders meeting [in 2003]. I was running around the lobby in a tiger costume being chased and ended up being strangled by this big security guard.

Ever since then, they have used me a lot. I’ve been trained to climb and they’ve sent me to the Amazon and to Papua New Guinea to work in forestry. But generally I’m a climber for them, mostly combatting climate change. I’ve climbed a few cranes either here or in Italy when there was a G8 summit in session.

ICN: What is your personal motivation for doing this?

LS: I have a boatload of nieces and nephews. It is more for them now than for anything else. I look around and see the choices we’re making as a society and it frightens me for their future. We should have to leave the world in a better condition than what we were born into. In order for that to happen, it requires bold action. Unfortunately, our leaders don’t always take that bold action, and so it is up to regular people to be bold in order to make things happen.

ICN: When you get asked to participate in these direct action campaigns, how much notice do you get from Greenpeace?

LS: Very little notice. Generally just a couple of days. For this activity, it was literally two days. It was, “Can you leave on Friday?” And I didn’t even know what I was doing or where I was going.

ICN: What is it like planning and setting up these protests?

LS: It is a little clandestine and covert, definitely. It takes a lot of planning, a lot of communication, and scouting to figure out how to do it. That is the biggest adrenaline rush of everything. Certainly that keeps going as you keep working, but it usually is the initial deployment that takes the most adrenaline.

ICN: There are so many logistical questions. Do you sleep? How do you get food?

LS: It is very fatiguing to be on a rope. Sleep happens, but it happens in more spurts than long intervals. Between the 13 of us, we try and make sure half are awake and on watch and the other half doze off for an hour or hour and a half whenever we can. We also have a lot of supplies with us that have been lowered to us from our support staff on the bridge. When that is not possible, we can drop a rope down to the support team in boats on the river and they can deliver supplies to us that way as well.

ICN: These are often multi-day protests. How to do you go to the bathroom?

LS: We have a system of bottles and bags, though a little bit more complicated than that. It is not the most glamorous of systems, but it definitely works.

ICN: How do you prevent your muscles from seizing up?

LS: You have to move constantly because the blood seizes up in the muscles really fast. After every hour or so, you want to get up, even if you aren’t climbing on the rope. Right now I am rotating my ankles and toes and wrists and fingers as I’m talking to you.

ICN: What are they saying?

LS: They are screaming at us, but I can’t hear them. [Ed. Note: The Coast Guard was starting to try to get the protesters off the bridge around the time this interview took place.]

ICN: What was it like watching the ship turn around and re-dock Thursday morning?

LS: We were up at sunrise. It took us about 5 minutes to get into position to rappel down. The Coast Guard came and told us we were violating an injunction and we were going to be arrested if we didn’t leave immediately. The ship came within about 500 feet, then stopped and waited. It was about an hour and a half of sitting down there waiting to see what would happen with the ship. That takes a lot of stamina. Physically, it was draining. Emotionally, it was really empowering.

When the ship turned around, a lot of us were crying because it was such a powerful moment. It felt like watching a dog run away with its tail between its legs.

ICN: Have you been arrested before?

ICN: Have you actually served any time in jail?

ICN: Have you developed any tips for dealing with being arrested?

LS: I’ll be completely honest, going to jail is not glamorous at all. It is a horrible system. Things can go wrong, time could be served, and some people could be convicted even. That’s always a possibility you take into account when you take part in something like this. Generally speaking, though, we’re going to go to jail for a few days, maximum, and then be out and able to live our lives again. But the people you encounter in the system, they don’t have that opportunity. They don’t even always have legal counsel. It is something to be mindful of when we do go.

ICN: I imagine this would be a difficult lifestyle not only on you, but also on your loved ones.

LS: My poor husband. I think he’s conflicted 50/50. He’s really proud of me and he really believes in the work that I do. At the same time, he’s terrified. He doesn’t sleep very much when I’m doing this kind of thing. He worries a lot. But, I think he’s more proud than anything else.

ICN: How long have you been married?

LS: We’ve been together for 10 years, and married for four years now. We were one of the first couples in New York to get married when the marriage equality law passed.

ICN: You don’t get paid for this and you get very little notice beforehand. How do your employers handle this?

LS: I’m really blessed with my situation because I teach yoga and am a performer, so the flexibility is really not such an issue for me. You definitely have to upend your life, your relationships to go and do something. But that’s what I mean by bold action. You have to take it. It is not necessary to hang off a bridge, but these times are desperate and they call for action all around the world from all of us.

ICN: What is this group of activists who volunteer for Greenpeace like?

LS: Greenpeace likes to work with people they depend on, so people they’ve either trained or gotten to know or have a relationship with. These kinds of experiences require not just communication between the activists, but a sense of trust also has to be there because we’re putting our lives in each others’ hands a lot of the time. It is really important that it is not just random people.

ICN: At any point do you look at your life and think, this is surreal?

LS: Pretty much all the time. I’m an actor, singer and yoga teacher and sometimes I find myself sitting on a rope for three days hanging from a bridge to stop a ship. Every two seconds I’m like, “This is surreal. What am I doing? How did I get here?” I do believe in the issues I fight for, but it doesn’t change the surrealness of it all. 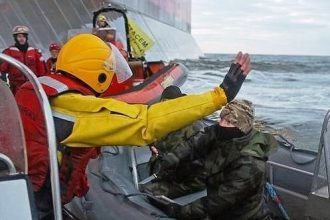