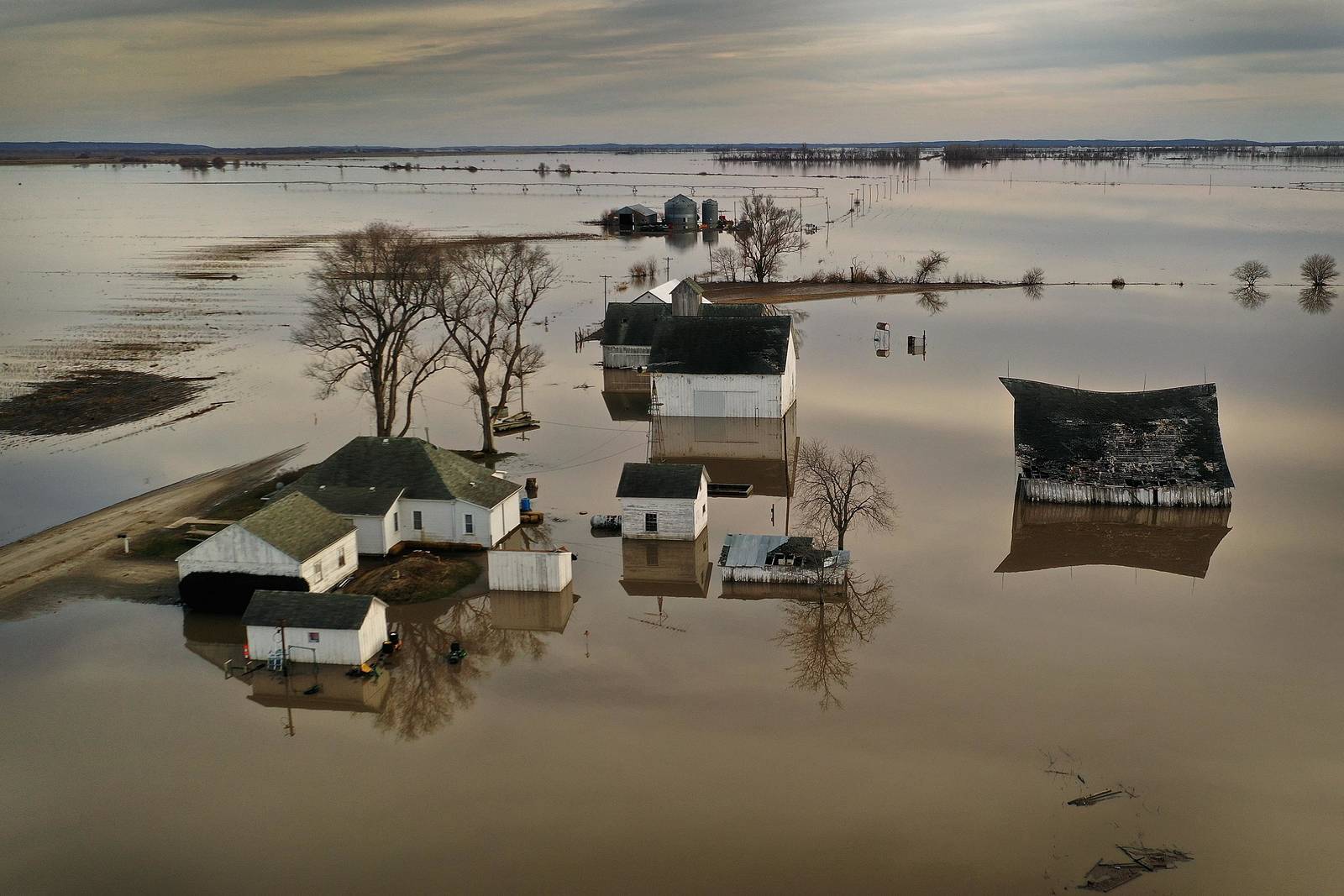 NIOBRARA, Nebraska—The scale of the devastation wrought by one of the most destructive floods ever to hit the northern Great Plains was clear by the time we arrived to report the American Climate project last April. Highways, bridges and dams had been washed away, leaving much of the region impassable. Levees were breached at dozens of sites. Tens of thousands of farm animals had drowned. Fields in need of planting lay under water. Nearly two-thirds of Nebraska’s 93 counties were under a state of emergency.

The flood of 2019, declared Nebraska Gov. Pete Ricketts, was the “most widespread disaster we’ve had in our state’s history.”

Several weather extremes converged to unleash the catastrophic flooding that began on March 13: Unusually warm temperatures brought heavy rain and a sudden, rapid thaw of the snowpack after a cold, snowy February. All that water, unable to penetrate the still-frozen earth, rushed into the rivers, which jumped their banks and, in some places, overwhelmed the levees.

Exceptionally wet weather had saturated the ground in the 12 months prior, which “set the stage” for the Great Plains flood, said Nebraska State Climatologist Martha Shulski and other regional scientists. All those trends mirror climate researchers’ projections of wetter, more volatile weather for the Northern Plains.

The spring flooding provided a glimpse of what the future, transformed by climate change, will likely hold for the region. “We are living those projections,” Shulski said.

In Nebraska, which bore the brunt of the flooding, the toll was staggering: an estimated $1.5 billion cost to the economy, including $400 million in livestock deaths, $440 million in crop losses and $439 million in road and infrastructure damage. The floods hit the Plains as farmers and ranchers were already struggling with financial damage from the trade war President Trump launched against China. Bankruptcies and delinquent loan payments were rising, and damage from the extreme weather added to the stress.

The northern Great Plains is a region already prone to great weather variability, from drought to intense rainfall and flooding. As climate change continues to heat up the atmosphere, it will fuel more of these weather extremes, according to the 2018 National Climate Assessment.

Winters and springs will get wetter, said Shulski, who is also a contributor to the climate report. Nebraska has warmed 1.6 degrees Fahrenheit since 1895. For much of that time, the increase was at a rate of 0.15 degrees per decade, but in the last 30 years, the rate of warming jumped to 0.30 degrees per decade.

Climate change amplified the region’s wet weather and its cold winters in the seasons before the flooding, and the inundation exposed weak infrastructure that collapsed under the immense force of the water.

The 12-month period leading up to February 2019 was the fifth-wettest stretch of weather in Nebraska since 1895, Shulski said. Similarly, Iowa had its third wettest-winter in early 2019 in over a century, according to state climatologist Justin Glisan.

Across the northern Great Plains, the saturated ground froze over a harsh winter, and then the region got an unusual amount of snow in February — about 23 inches in Iowa, Glisan said, nearly 16 inches above average. Nebraska faced similar conditions.

“What the extreme cold did before the disaster was that it allowed the soil to freeze deeply,” Shulski said. “So now we have saturated, frozen soils, and we have several inches of water equivalent in snow on top of the soil.”

Then came the chaos. Intense precipitation in the form of a “bomb cyclone” hit the region, producing heavy storms that dumped more than two weeks worth of rain within 36 hours. (A bomb cyclone is when a storm intensifies so rapidly that the barometric pressure drops 24 millibars over 24 hours.) The rain fell on land it couldn’t penetrate and ran off into waterways. The rapid warming that accompanied the rain thawed the snow, which also flowed into creeks and rivers, and the ice on the rivers began to break apart.

Eventually, the Elkhorn, Platte and Missouri Rivers flooded and jumped their banks, pushing rail-car sized ice chunks across ranches and farms, destroying a dam in Spencer, Nebraska, and causing at least 30 levee breaches in Iowa.

Glisan cautions that “it’s difficult to take two seasons and a few days of high precipitation and run-off and say that we see a human fingerprint on the weather.” But the events that triggered the March flooding are in line with changes that scientists have observed over the last few decades and with trends they see going forward, he said.

The region has seen a trend emerging over the last 20 to 30 years in the Upper Missouri Basin where precipitation has shifted from gentle rainfall that lasts for a few hours to shorter, much more intense events, Glisan said.

“The probability of these kinds of events increasing is rising and the science is showing that,” Glisan said. “We’re getting into a regime of more precipitation and more flooding.”

Many local residents told us they blamed the flooding on failed levees and dams, and they’re not wrong. Besides the levee breaches, the Spencer Dam collapse on the Niobrara River led to swift, catastrophic flooding downstream. The dam was about 80 years old, and “it couldn’t keep up” with floods like this, Glisan said.

But what scientists most fear is that unless people recognize climate change’s role in this flooding—and pay attention to projections that flood risk is getting worse—they won’t move quickly enough to fortify the infrastructure in time.

“If we’re having higher intensity rainfall events and higher runoff events, then poorly maintained levees, or those not well enough maintained, will be breached or destroyed,” Glisan said, “and we saw that with every levee south of Council Bluffs during the March events.”