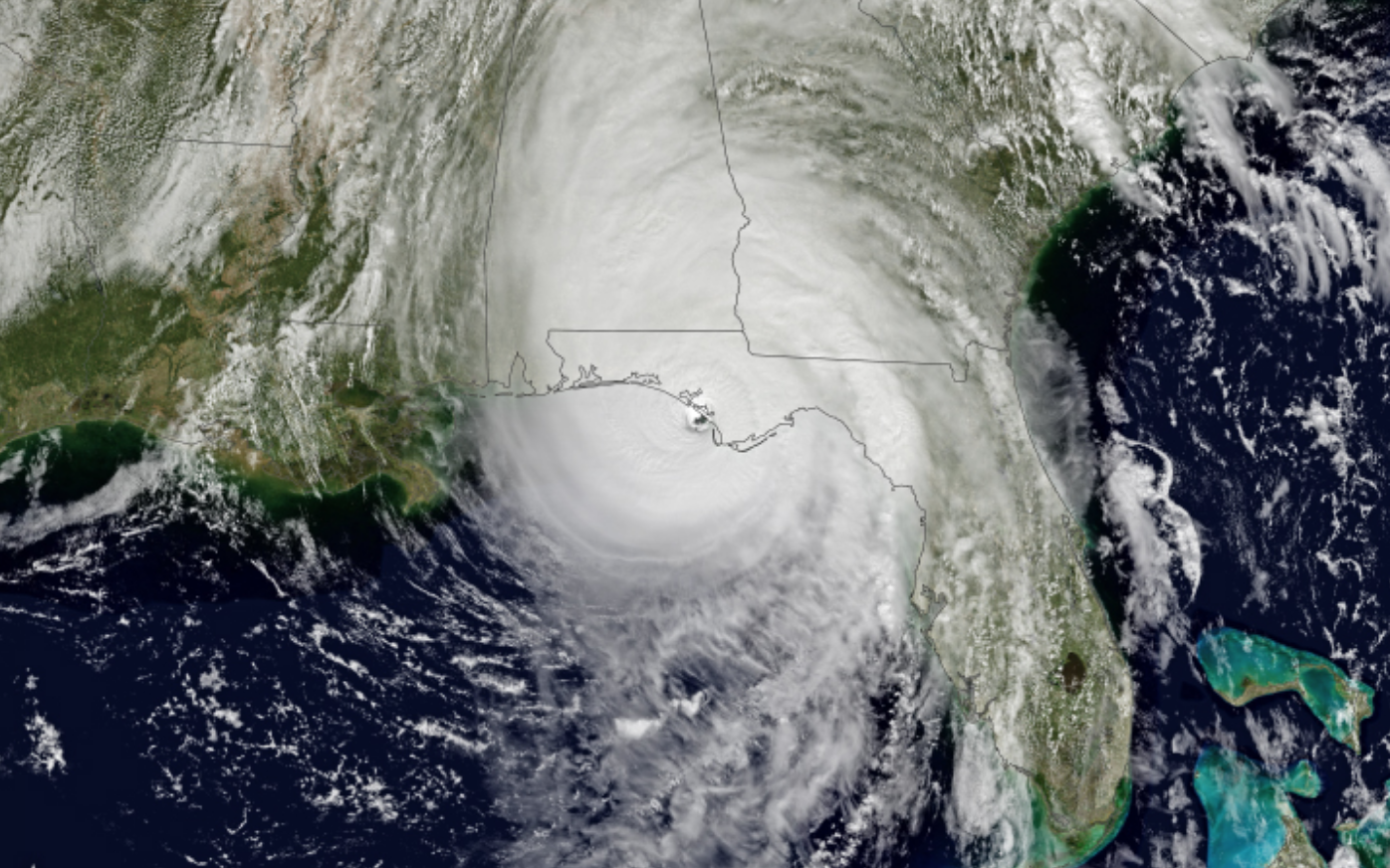 MEXICO BEACH, Florida—When Hurricane Michael exploded in strength over the Gulf of Mexico in October 2018 and hit Florida with a devastating storm surge and 160 mile-per-hour winds, it marked the first Category 5 storm to reach the Panhandle and only the fifth to make landfall in the United States.

Michael reduced much of the Panhandle town of Mexico Beach to splinters and destroyed parts of other nearby communities. We saw the destruction firsthand while reporting here for the American Climate project. It killed 16 people across the Southeast and is considered responsible for 43 other deaths in Florida, including from storm clean-up accidents and health issues worsened by the hurricane, according to the National Oceanic and Atmospheric Administration (NOAA). It inflicted about $25 billion of damage to the region, including about $5 billion alone at Tyndall Air Force Base near Panama City.

More than other weather disasters, hurricanes seem to prompt people to ask: Was climate change to blame?

Many factors give rise to a hurricane, feed its wind strength and rainfall, and determine the track it ultimately follows. But all this is occurring in a global climate that has been heated up by human-caused greenhouse gas emissions.

Scientists, so far, can’t tease out exactly how much of a given hurricane’s size or impact is because of climate change. What they do know is this: Hurricanes draw their energy from the oceans, and the oceans are now warmer than they’ve been in 125,000 years because they’ve absorbed 90 percent of the excess heat trapped in the atmosphere by increased greenhouse gas emissions. The warmer oceans provide more energy to amp up hurricanes by intensifying wind and rainfall—like a steroid enhancing the performance of an athlete.

Scientists who research how climate change affects hurricanes readily acknowledge that much remains unknown. The research is constrained by the fact that hurricanes, especially the ones that make landfall, are rare events, which means there’s not a rich historical record to draw on like the record that exists for surface temperatures across the earth. Data-collecting instruments on aircraft that fly into storms have only been around since the mid-1950s, and comprehensive satellite imagery for hurricanes since the 1960s.

Still, climate researchers have been able to confirm a few hurricane trends in the Atlantic basin, which includes the Gulf of Mexico, where Hurricane Michael gathered its terrible power. Overall, the trends fueled by climate change, such as warmer ocean temperatures, indicate that hurricanes in the region will likely be more dangerous as the planet gets hotter.

For example, scientists are highly confident that climate change will increase the rainfall that occurs during hurricanes. That’s because in a warmer world, the atmosphere holds more water vapor, which makes for more intense precipitation. For every 1.8 degree Fahrenheit (1°C)  increase in global average surface temperatures — the amount the earth has warmed since the 1880s — the atmosphere will hold an estimated 7 percent more water vapor. A 2018 study found that, already, climate change had boosted the average rainfall of hurricanes Katrina, Irma and Maria.

Because hurricanes draw their energy from warming ocean waters, climate research projects that a greater proportion of storms will be Category 4 or Category 5 events, which means they will have sustained winds of 130 miles per hour or more.

A 2014 study showed that from 1975 to 2010 the proportion of Category 4 or 5 storms rose 25 to 30 percent because of human-caused climate change. “The increases are substantial, approaching a doubling in frequency of Cat 4 and 5 hurricanes,” the study concluded.

“We understand a few things pretty well about hurricanes and how they respond to the environment as ocean temperatures warm up,” said James Kossin, an atmospheric scientist at NOAA. “All other factors being equal, the maximum speed for hurricanes will be higher and climate change is increasing the speed limit. It doesn’t mean every storm will be stronger, but the percentage of really strong storms is growing.”

Hurricane Michael also brought a storm surge of as much as 14 feet to areas that normally don’t flood in the Panhandle. Rising seas fueled by climate change will make storm surges more severe, threatening coastal communities with more destructive flooding when hurricanes hit. Sea levels worldwide already have risen 8 to 9 inches since 1880. A third of that increase has happened since 1990, and scientists expect the sea level rise to accelerate because of warmer temperatures.

Many Panhandle residents thought they could ride out Hurricane Michael, but it strengthened swiftly. It went from a just-formed tropical storm to a hurricane in a day, and from a Category 1 storm to a Category 5 storm over two days.

Scientists have a medium-level of confidence that such rapid intensification of hurricanes will happen more often as the earth gets hotter, Kossin said. From 1982 to 2009, there were “significant increases” in how rapidly storms intensified in the Atlantic basin, according to a February 2019 paper in Nature. Rapid intensification is defined by the National Hurricane Center as sustained wind speeds increasing by at least 30 knots, or 34.5 miles, per hour over a 24-hour period.

Scientists are still researching whether climate change will increase the frequency of hurricanes in the Atlantic. So far, that doesn’t seem to be the case. But the ones that do form will probably be more powerful and lethal.