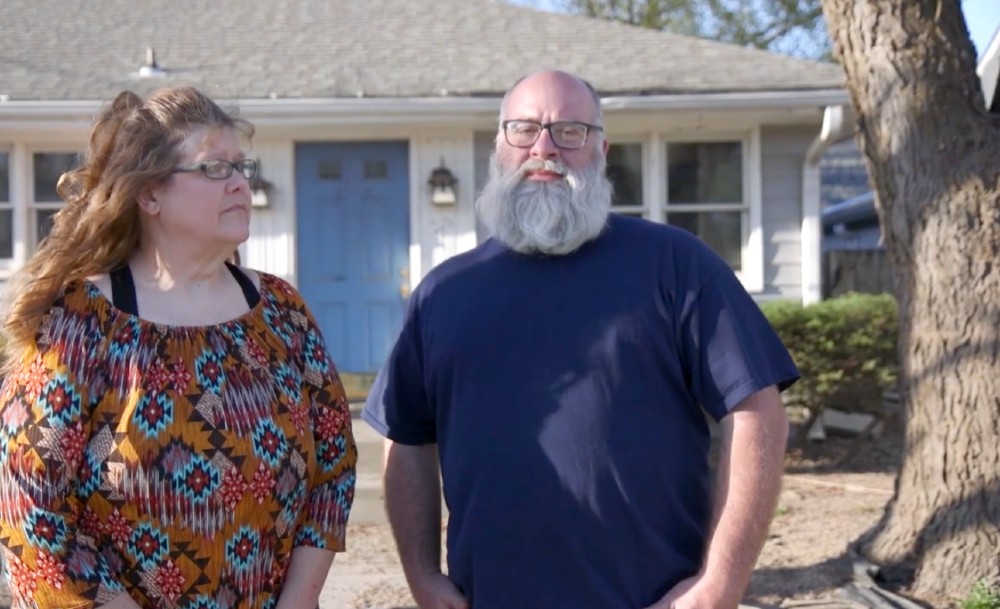 The first of 21 stories from the American Climate Project, an InsideClimate News documentary series by videographer Anna Belle Peevey and reporter Neela Banerjee.

For two years, a home on North Street in Hamburg, Iowa, was a refuge for Kevin and Kim Johnson.

The house was perfect. The secluded backyard had tall fences that separated them from their neighbors, creating a private sanctuary where they could relax and hide away from the world.

When the couple moved in, the backyard was barren. They planted the flowerbeds, landscaped the patch of grass, and added a pond filled with flowers and 17 koi. Each day when Kevin got home from work, the couple started their evening by feeding the fish together.

“It just felt like our own little paradise right there,” Kevin said.

In March 2019, the Missouri River flooded and put Kevin and Kim’s paradise under nine feet of water.

“Our fish are no longer,” Kevin said. “We have no idea what happened to them, obviously.”

The flooding was a culmination of several factors—heavy rains, warm temperatures, melting snow and impenetrable frozen ground—each of which was exacerbated by a changing climate.

Iowa had just experienced its third wettest winter in over a century, according to state climatologist Justin Glisan. The soils were frozen solid when a bomb cyclone struck the Midwest, dropping two weeks worth of rain on the region in just a day and a half.

As floodwaters began creeping into Hamburg last March, Kevin took the day off work to prepare. The Johnsons had only lived in their home for two years, but previous residents told them to expect about three feet of water to flood the house.

They moved some computers and furniture to safety, but left clothes hanging in the closet. In the little time they had left, they focused on helping sandbag the town rather than clearing out their own home.

“We knew that this was just going to be hopeless in a couple of hours and so I don’t know,” Kim said, “it seemed more important to help sandbag than it did a couch or a table.”

As they worked to stop the flood from reaching the majority of Hamburg, just north of where they lived, they knew the waters had already arrived at their home.

“We just had no clue what the extent was gonna be when it was all said and done,” Kim said.

It took the floodwaters a month to recede. When the Johnsons returned, their home was unrecognizable. The yellow stain the water left on the formerly white walls stopped just inches below the ceiling. Rapidly growing mold encrusted the leftover Casey’s pizza sitting on the coffee table that had been their last supper in the house. A swollen dresser laid sideways on the bedroom floor; inside of it, a battered jewelry case protected an undamaged bracelet.

Even if everything was fixed, Kevin said, the house would never feel the same as it was. The Johnsons decided they needed to rebuild their paradise somewhere else, on higher ground.

“I don’t think we’re willing to put the time and money that it’s going to take to make this livable again,” Kevin said.

In a changing climate, disasters like this are happening more frequently. The Johnsons fear another flood could hit this piece of land that used to be their refuge.

“I can’t imagine why you would ever want to do this twice in a lifetime,” Kim said.