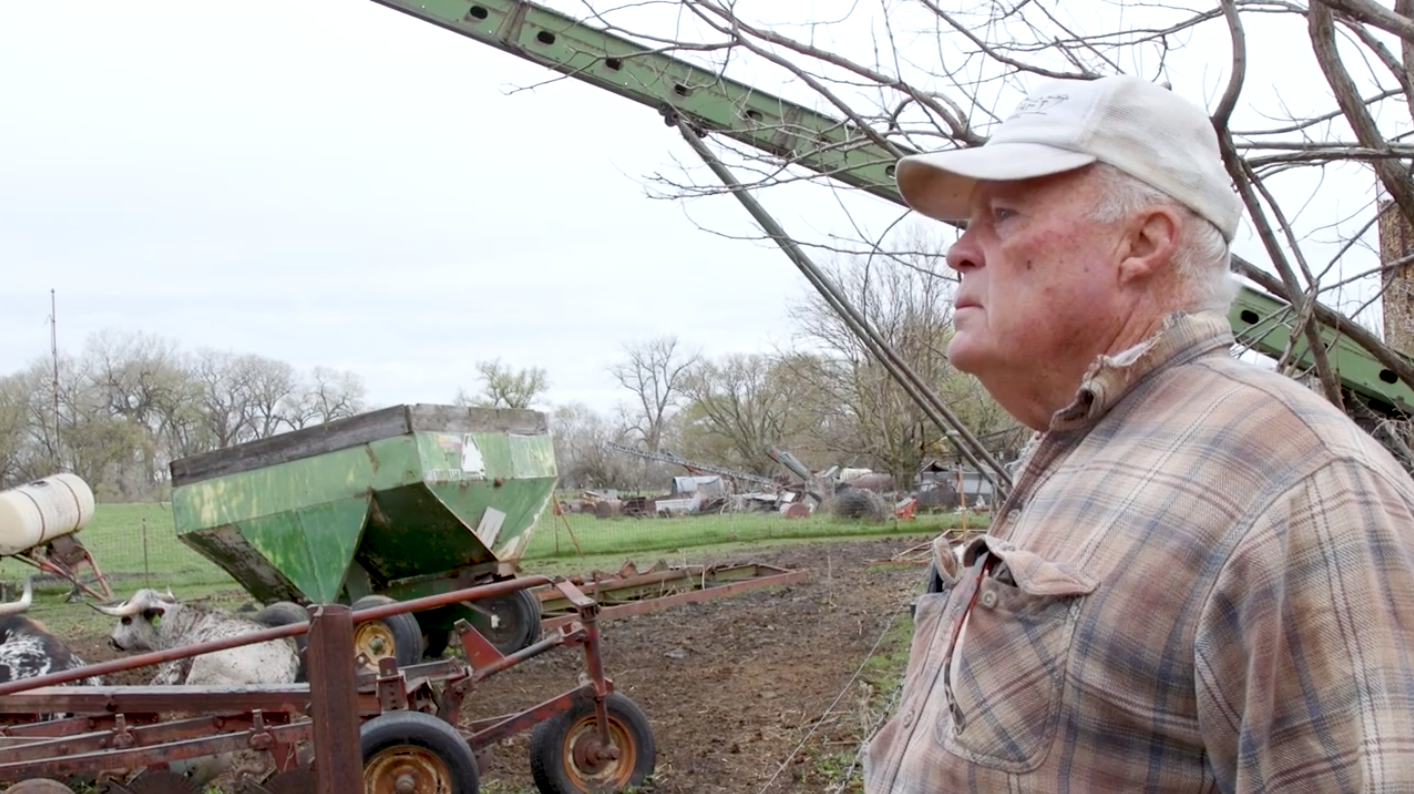 The 10th of 21 stories from the American Climate Project, an InsideClimate News documentary series by videographer Anna Belle Peevey and reporter Neela Banerjee.

NORFOLK, Nebraska—Unlike many ranchers, Merle Stuthman sees his Texas Longhorn cattle not just as a source of income—showing them at state fairs and selling their horns, hide and meat—but as animal companions he comes to care for and think of almost as pets.

“They’re my friends,” he said. “It’s hard to send one to the butcher shop or something, but that’s what they’re for.”

Raising the animals is rewarding, he said, and spending time with them is relaxing. This unexpected intimacy makes sense when he talks to his animals.

“Can you say ‘hi’ to these folks?” Stuthman said to Nelly, one of his calves. “Your mommy died, didn’t she? Yeah. She was my second best trophy cow. So you’re gonna have to carry on now, aren’t you?”

Nelly’s mom was one of 10 Texas Longhorns that Stuthman lost in March 2019 when a deluge of rain suddenly flooded his farm. Three were carrying unborn calves, including two trophy cows. Stuthman had spent thousands showing them at farm events.

“Where some people like to polish their pickup or their boat, I like to show off my two cows,” he said. “They get a lot of people looking over the fence and taking pictures.”

Stuthman was counting on the new calves from his trophy cows to continue his operation.

“I really miss my two trophy cows. I lose sleep over that,” he said. “I’ll find a couple more again, maybe.”

After the floods receded, Stuthman was left with 31 surviving cattle.

As Nebraska’s climate has warmed over the last 30 years, precipitation has also increased. The 12 months prior to this flood had been the fifth-wettest in the state since 1895. When the rains began in mid-March, the ground was still frozen, so rather than percolating into the soil, stormwater rushed to waterways, leading to quick, massive floods across the region. The heavy precipitation can be partially attributed to climate change, as warmer air can hold larger volumes of water, leading to heavier rain and snow events.

At Stuthman’s farm, the water rose rapidly and the wind whipped at 60 mph. The water raged across his land. “It’s like a hurricane, out at sea,” he said. “It was terrifying.”

While waiting for the waters to pass, Stuthman knew the aftermath was going to be bad. He wondered if any of his cattle would survive the bitter cold and rapidly moving water.

When Stuthman first returned to the farm, he didn’t see cattle anywhere. Then he found five calves and a cow dead next to his barn. Four more cows made it to higher ground, but died, he assumed, because of hypothermia.

The nearby Elkhorn River crested at 24.6 feet—nearly 20 feet higher than the previous record.

“They even call this a thousand year flood now,” Stuthman said. “This old barn up here that’s fallen down has never had water on it. It had 40 inches of water. That’s how high it was.”

Raising cattle is simply a hobby for Stuthman in his retirement. After the flood, he was left to question whether he should keep the hobby up.

“I’m 75, so maybe I should throw in the towel, take the grandsons fishing every day,” Stuthman said. “But I come from a family farm and that’s why we do this.”