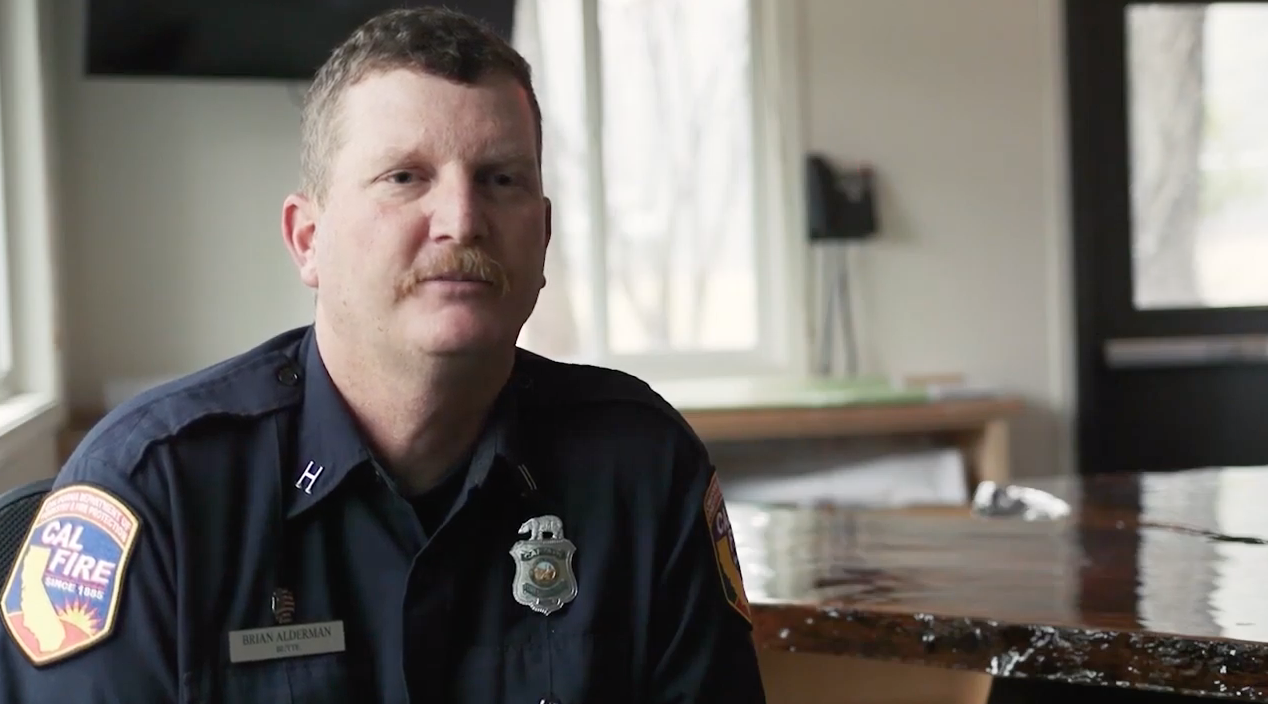 The sixth of 21 stories from the American Climate Project, an InsideClimate News documentary series by videographer Anna Belle Peevey and reporter Neela Banerjee.

PARADISE, California—Three decades of fire fighting could not have prepared Chico Fire Department Captain Brian Alderman for the Camp Fire in 2018.

The November morning blaze moved quickly—at a rate of a football field per second. The flames ate through dry brush and downed timber before Alderman and his team of young California Conservation Corps members even began fighting the fire. High winds exacerbated the situation, making the fire move as if it had a mind of its own.

“There was really no thought of being able to stop and contain or corral or redirect the fire,” Alderman recalled. “The weather was dictating what the fire was gonna do and the fire at that point was not gonna stop without a change in the weather. So our main focus right there was doing everything we could to keep the roads open.”

As fire captain, Alderman had a lot to worry about, but these trainees were a priority. “My focus was on taking care of the task at hand and keeping my 15 kids safe,” Alderman said.

Paradise, California, experienced the worst of the Camp Fire’s destruction, but surrounding towns were also devastated. The biggest threat that Alderman had to address that morning was in Concow, a small town just northeast of Paradise. By the time he and his team arrived, the fire had already burned down houses. Some residents were returning back to Concow from work to grab pets and belongings from their homes. Others retreated in the opposite direction, creating a traffic jam on the main road out of town.

“There were folks that were fleeing and in absolute panic, crying and screaming at us as they drove by, telling us we needed to do more and we were already doing everything that we could,” Alderman said.

Although wildfires occur frequently in California, this disaster, which killed 85 people and burned 18,000 buildings, is the state’s most destructive wildfire to date. A warming climate can create ideal conditions for fire, with extended droughts making a tinderbox of California brush. The warming also extended the fire season. Butte County, where the bulk of the Camp Fire’s damage occurred, was in the midst of a drought in November 2018.

Alderman, who had been a California firefighter since 1989, called this blaze the “most aggressive wildland fire that I’ve ever seen.”

“It was just growing by leaps and bounds faster than what we could deal with,” he said. Radio reports warned first responders of new fires popping up, 10 miles away from where it had originated just two hours earlier.

“At first I thought, you know, ‘I didn’t hear that right on the radio, there’s no way that fire is in that location by this point,’” he said.

Alderman called his wife early in the day to warn her to get the dog, load up the car and get out of town. He didn’t speak to her again for a day and a half while he worked for 30 hours straight until a relief shift came in.

He was aware that his home in Chico was in the fire’s path, given the way the winds were blowing, but he said he never truly believed the fire would get that far. It wasn’t until the morning after the fire that a friend texted Alderman to tell him that his house was gone.

“The basis for all families, you know, is your home,” Alderman said. “That’s where everybody comes back to.”

His family lost mementos like photo albums, yearbooks, jewelry and a coin collection that his wife’s family brought when they immigrated from Italy.

His experience fighting the Camp Fire has changed the way he looks at his job, Alderman said. The early morning fire was not in the heat of the day, nor in the regular fire season.

“It makes me more vigilant in looking at how we deal with fighting fire on a daily basis when, you know, when that weather gets here again, how are we going to deal with things?” Alderman said. “It’s a great possibility that, you know, this could become….the new norm.”