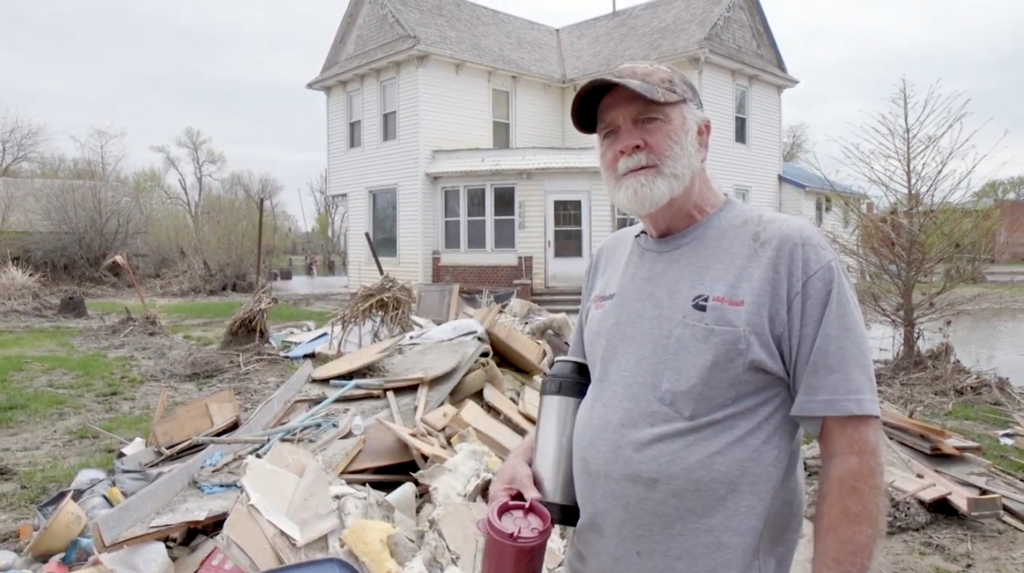 The 19th of 21 stories from the American Climate Project, an InsideClimate News documentary series by videographer Anna Belle Peevey and reporter Neela Banerjee.

CORNING, Missouri—When floodwaters inundated Louis Byford’s white clapboard home for the fourth time in March 2019, he did not care if people thought he was crazy. He was going to live in his house.

“I don’t have any desire to be located anywhere else but right here,” said Byford, who has lived in Corning for nearly 50 years.

The spring, 2019 floods in the Midwest devastated communities all along the Missouri River. A combination of heavy rainfall and still-frozen ground led to a rush of water swelling the river. Scientists warn that climate change will lead to more extreme weather events, like this one that destroyed Byford’s property.

When Byford bought the house in 1993, it had serious flood damage from rains that spring. Byford refurbished it and called it his home. In 2000, the house flooded again. He tore out everything and refurbished it once more.

He planted 127 pine trees in the yard, where they grew to tower over his property. In 2011, another flood came through and drowned all the trees.

“They were beautiful. You heard the old song about the wind whistling through the pines? Anyway, it whistled all right,” he said. “But it didn’t after the flood.”

Byford calls himself a “determined man.” He had no intention of ever leaving his home. So when word started to spread that 2019 could bring another catastrophic flood, he hoped it wouldn’t be too bad. Two days before the flood peaked, he and his neighbors started to move things out. A levee on a creek near his house broke, which contributed to the flood’s destructive power.

“We were just really getting comfortable again,” he said, “and here we are again.”

Even though Byford has no prospect of ever selling his home, he started rebuilding. Ever since he paid off his mortgage, he has planned to stay put. With the repeated flooding, he would now like to raise the house at least 10 feet to avoid the cycle of refurbishing.

“I am a firmly rooted fellow, I guess, if you will,” he said. “After 49 years I’m not gonna go anywhere else.”

Now, more than a year later, Byford is still living in a rental home waiting to repair his house in Corning. He has all the supplies he needs to start rebuilding, but he is waiting on the levee that broke during the flood to be reconstructed.

“It’s a slow process, but eventually there will be something accomplished,” Byford said. “I’m kind of at a standstill.”