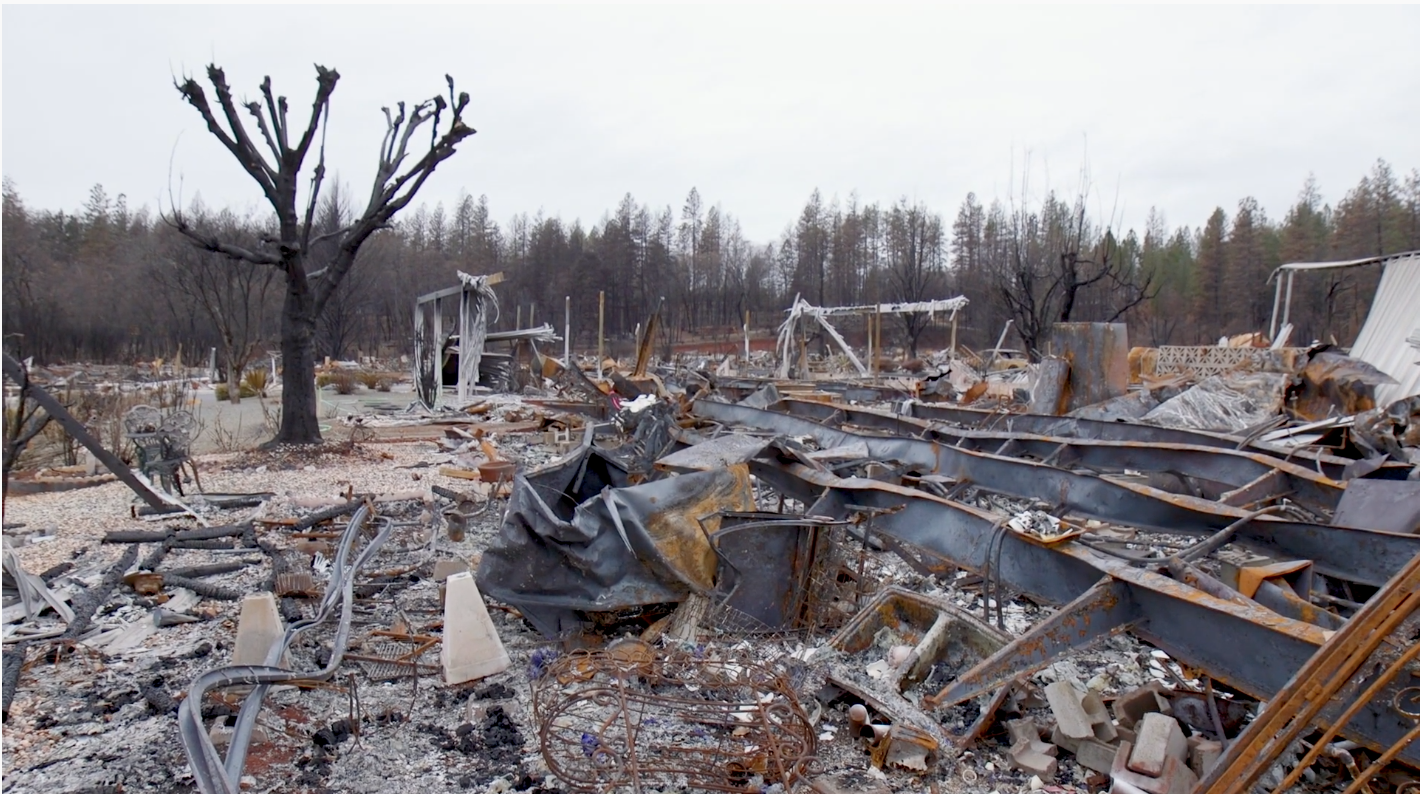 The 15th of 21 stories from the American Climate Project, an InsideClimate News documentary series by videographer Anna Belle Peevey and reporter Neela Banerjee.

PARADISE, California—When Stephen Murray arrived for work at Apple Tree Village Mobile Home Park just before 7 a.m., the garbage truck had already come through and newspapers were sitting on residents’ porches. Many of the 281 residents—all senior citizens—were still asleep in their homes.

“I knew that that fire was going to come in a hurry,” he said.

Murray had made sure that his fiancé was awake and prepared to leave. She took their two children and headed out of town. Murray stayed behind. As maintenance manager at Apple Tree Village, he needed to help the residents get to safety.

For the next three hours, Murray drove around the park, which was a mile and a half long, honking and yelling at people to evacuate.

“I kicked in their doors. I woke them up, I got them out of bed and got them to safety,” he said.

There was no predetermined fire plan for the park. Having worked there for two and a half years, Murray knew that the park was not prepared for a wildfire and that the evacuation of hundreds of elderly people would be nearly impossible with just one exit.

With a warming climate, wildfires are becoming even more of a threat for Californians. The state has experienced nine of its 10 most destructive fires since 2000. Warmer temperatures can elongate the wildfire season and exacerbate drought conditions that create tinderboxes out of forests. Both conditions contributed to the severity of the Camp Fire.

While driving around the mobile home park, Murray lost track of which doors he had already knocked on, of who had already evacuated and who still needed help.

When he was as sure as he could be that everyone was heading for safety, Murray had to find an alternate escape route because the exit was blocked with cars, and there was gridlock on the road out of town, as people fled.

With two Apple Tree Village residents in his truck, an 85-year-old man and an 87-year-old woman, Murray led a train of cars out through the woods, knocking over fences until he reached a bike trail that led out of town.

The woman in his truck begged Murray to go back so she could find her twin sister, who lived near the mobile home park. But the fire was moving too fast and there was no time to waste.

“I just, I couldn’t do it,” he said. “I had to assure her that her sister was fine, and luckily she is.”

At one point, the two elderly passengers needed a restroom. Frustrated and anxious to keep moving, he stopped. He set the elderly woman up with her oxygen tank, which she needed to walk from the truck to the bathroom.

“At this point, I’m cursing a lot. I’m punching the wall. Because I just want to go, right?” Murray said. “But here a woman has to use the restroom. No shoes on. She’s in her fuzzy blue socks.”

Thanks to Murray, all 281 seniors survived the fire.

“It’s a grace of God that everybody got out,that nobody perished in that park,” he said.

Murray’s relationship with the seniors in the mobile home park went far beyond his job. To many, he was family. To some, he was the person they called before they called 911.

“I would go to the grocery store for folks, I would get their newspapers in the mornings,” Murray said. “I would stop just to give them a hug before I left every day. I knew what they drove. I knew what days they were gone.”

Even after the fire, when the park was gone and Paradise was in ashes, Murray still took care of the seniors who depended on him.

One resident of the mobile home park told Murray that he left his safe open before the fire. After the fire, Murray said, the man  called to ask if Murray could go retrieve the contents of the safe to make sure looters didn’t take anything. When he got to the trailer, which was still standing, he said he emptied $230,000 worth of gold bars and carried them out in a laundry basket.

It wasn’t just the seniors that Murray helped in the weeks and months after the Camp Fire. Though he himself lost his home in the blaze, causing his family to relocate into a small RV outside of town, Murray spent most of his time helping other Paradise residents with all sorts of needs—from finding housing, to raising money so they could buy essentials like gas and food. He even started an organization to benefit Camp Fire survivors called the Coral Apple Foundation.

Murray loved his job at the mobile home park. He never wanted to leave it. If the fire hadn’t destroyed it, he planned to retire there. It was a job where he didn’t care about the money, but about being in a place where he could help people in a hands-on way.

“Working at Apple Tree really filled my heart,” he said. “It was the job that I always looked for because there are so many seniors there. And there is so much need there.”