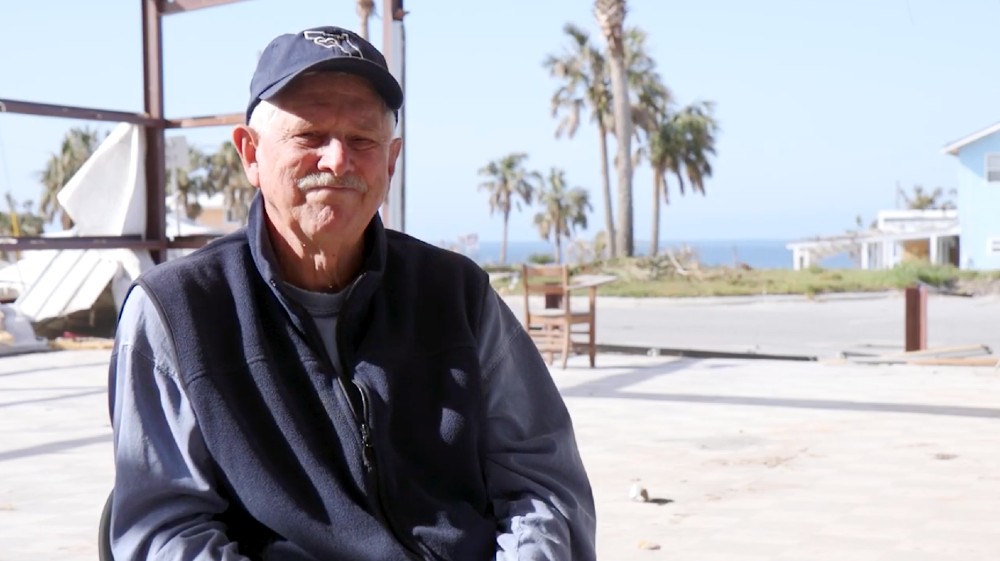 The second of 21 stories from the American Climate Project, an InsideClimate News documentary series by videographer Anna Belle Peevey and reporter Neela Banerjee.

MEXICO BEACH, Florida—Nothing in Al Cathey’s 14 years as mayor of Mexico Beach had quite prepared him for the aftermath of Hurricane Michael.

He went to work at his hardware store on Monday morning at the beginning of the second week of October 2018, and listened to talk of a storm out there in the Gulf of Mexico.

By Tuesday morning, with the governor ordering a mandatory evacuation, Cathey and other residents decided to stay with the storm, now forecast as a Category 3 hurricane, precise path unknown.

A day later, around 11 a.m., Cathey could see nothing but white outside his windows, as Michael hit Mexico Beach head on with 160 mph winds and a storm surge of 14 feet and more, the first Category 5 to reach the Panhandle and only the fifth to make landfall in the United States.

Cathey found 80 percent of his city destroyed the following morning as he walked two miles down Highway 98, haunted, as the man in charge of what had become a giant debris field, by a simple question:

He had lived through many a hurricane in his 66 years in Mexico Beach. His confusion stemmed in part from the fact that, as he would say later, “it was a different type of storm.”

Scientists can’t say how much of a hurricane’s size is the result of climate change. But they say hurricanes draw their energy from oceans that are now warmer than they have been for 125,000 years, having absorbed 90 percent of the excess heat trapped in earth’s atmosphere by increased greenhouse gas emissions.

And the warmer the ocean, the more energy exists to increase a hurricane’s wind and rainfall. From 1975 to 2010, the number of Category 4 or 5 storms rose 25 to 30 percent due to climate change, according to a 2014 study. “The increases are substantial, approaching a doubling in frequency of Cat 4 and 5 hurricanes,” the study concluded.

Sea level rise resulting from climate change also contributed to flooding on the Panhandle after Michael’s 14-foot storm surge. And the rising seas—up 8 to 9 inches since 1880—will continue to rise even faster as temperatures warm.

Cathey and other Panhandle residents simply couldn’t imagine a hurricane that intensified as rapidly as Michael did, surging from Category 1 to Category 5 in two days.

On the morning after, Cathey wondered whether his constituents and the town’s employees could find new strength of their own. “Can Mexico Beach, can we somehow get enough stamina and energy to get us through the task that’s ahead of us?” Cathey remembered thinking. “How do we start this process at a pace that we can maintain?”

And still they did feel, if not forgotten, then ignored and mistreated by bureaucrats, who rejected their applications for aid because of minor paperwork errors and denied assistance under federal rules that prohibited reconstruction assistance to second homes. “And I said, ‘Well, 75 percent of our city is second homeowners! What kind of program is that? What good is that? You don’t give us a break,’” Cathay recalled.

Months after the storm made landfall, Cathey still found himself processing what his town had lived through. While he’s not convinced the storm’s intensity was related to climate change, “I am convinced that it tells us that we are not as smart as we think we are,” he said. “That’s what it tells me. You fool with Mother Nature, you’re just gonna have to accept the fact that you’re just not as smart as you think you are. That’s what it tells me.”