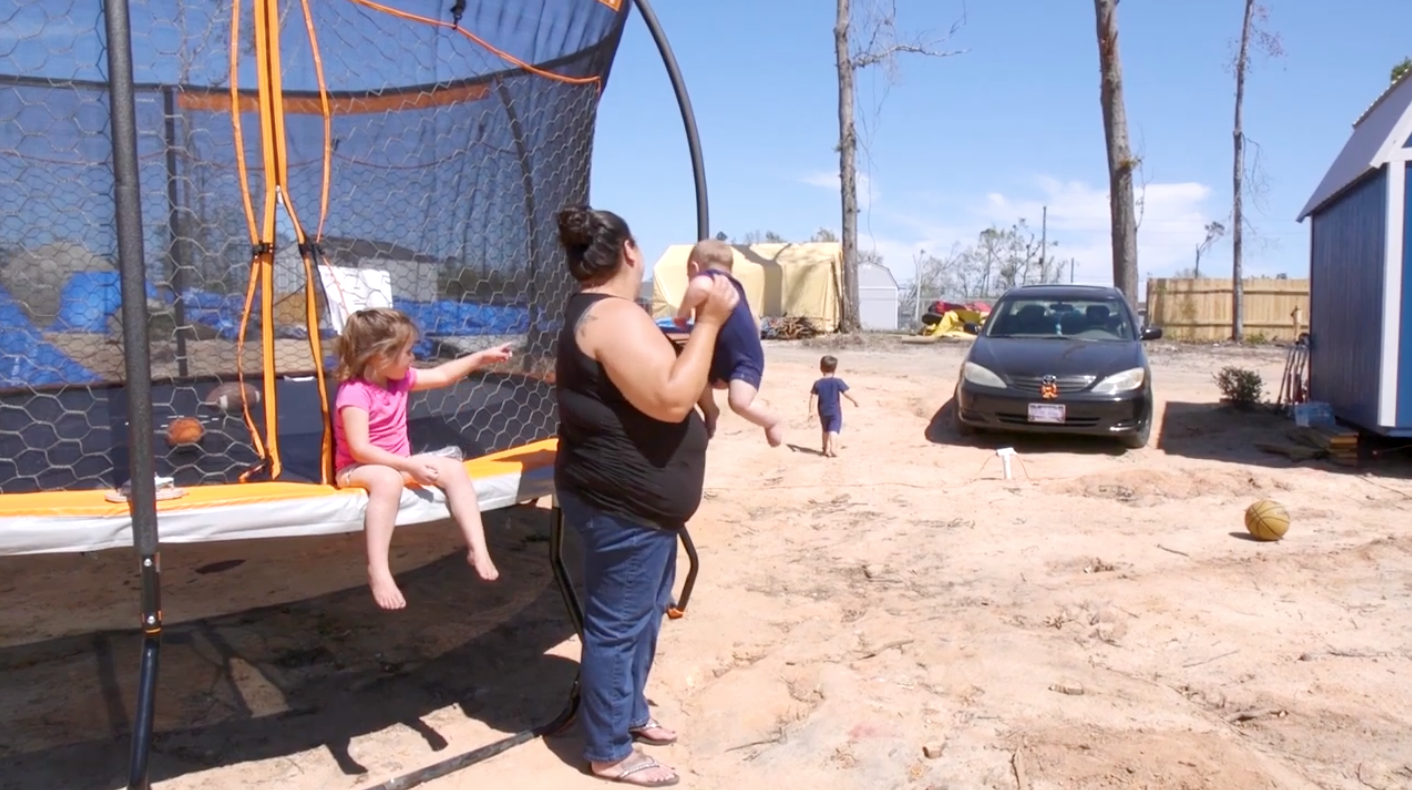 The 11th of 21 stories from the American Climate Project, an InsideClimate News documentary series by videographer Anna Belle Peevey and reporter Neela Banerjee.

PANAMA CITY, Florida—After Hurricane Michael pummeled the Florida Panhandle with Category 5 winds and rain on Oct. 10, 2018, Brittany Pitts’ 5-day-old son was showing signs of jaundice. Pitts needed postpartum care for herself and her baby needed to go to the hospital.

Her phone, which miraculously still worked after the storm had taken down cell phone towers, began to ring. It was a man from the Coast Guard, who had been called to evacuate her.

“I’m looking for Brittany Pitts and this baby,” she remembers him saying. “I have to take them to the hospital.”

A helicopter with a dangling basket flew over her apartment complex. Pitts begged the Coast Guardsman to let her bring her mother and her two toddlers along, but he said he could only take her and the baby. Her mother promised to take the kids and meet her at the hospital.

Pitts handed the infant to the Coast Guardsman and started to get into the basket, when she heard a woman scream, “My husband’s having a heart attack.” An older man in the parking lot was clutching his chest. The Coast Guard gave Pitts back her baby, and took the man and his wife instead. Pitts’ evacuation plan flew away, and her baby still had jaundice.

With less than a quarter tank of gas, Pitts, her mother, her two toddlers and her newborn baby got on the road that was covered with downed trees and debris and headed for Pitts’ sister’s house in South Carolina.

“We left with the diaper bag and the clothes on our backs,” Pitts said.

Less than a week before, on Oct. 5, Pitts had given birth by cesarean section to a baby boy named Lawson. Pitts and the baby were discharged on Oct. 7 and returned home to their apartment complex in Panama City. Pitts’ mother was taking care of her 2-year-old, Turner, and 3-year-old, Charleigh, while her 7-year-old, Wyatt, was with his father.

At the hospital, Pitts hadn’t paid much attention to the news. But when she got home she found out that Michael was projected to be a Category 4 hurricane.

“We started making phone calls, and I mean as far as Troy, Alabama, there were booked-out hotels,” Pitts said. “We couldn’t find anywhere to go.”

So Pitts decided to wait out the storm with her family.

Hurricane Michael increased in intensity rapidly. The storm grew from a Category 1 to a Category 4 in less than 48 hours, and by the time it hit land, Michael was a Category 5 with sustained winds of 160 mph.

The rain began at around 10 a.m. on Oct. 10. The downpour was so massive that Pitts couldn’t see the building next door through the window.

“It was almost like a white haze,” she said. “Little by little as time went on, you saw shingles and pieces of the roof start flying.”

The kids were playing in the living room when the dining room wall started to bow inward. Pitts and her mother moved the table against the wall to try to keep it from caving in. Then, Pitts looked toward the master bedroom and saw the ceiling begin to pull away from the wall. The roof was coming off.

“When that happened, I started freaking out,” she said. “As a mom that’s the last thing you want to do in front of your kids.”

In her panic, Pitts wanted to get her kids out of the apartment. Her phone still worked, so she called her neighbors in the building next door. She told them the roof came off her bedroom. The neighbors offered to take the kids into their apartment. They planned to pass each kid from Pitts’ door to the neighbors door where they would be safe.

But when she tried to open the door, the wind slapped it shut.

“We cannot leave this apartment,” Pitts’ mother told her.

Once Pitts realized there was nothing she could do, the emotions hit.

“Guilt was the biggest one and that was even before fear,” she said. “I have these small babies in here that don’t deserve to be experiencing something so traumatizing. And then after the guilt, the fear. Like, are we going to make it out of this alive?”

All throughout the storm, the kids stayed calm, which helped Pitts stay calm.

“They just stood there and they just watched out the window. They didn’t even ask for a snack, or having to go potty,” she said. “If they could be strong, then I could, too.”

After the storm subsided and the Coast Guard helicopter left with the man having a heart attack, the roads were blocked with downed power lines and trees as Pitts’ mom drove the family out of Panama City. Some people had already cleared pathways through the debris, but there were some obstacles that the car couldn’t get around.

“With staples in my stomach, I was attempting to move some of the trees, the tree limbs, doing whatever I could to make a big enough opening just to get her car through,” Pitts said.

The family safely arrived in South Carolina, and Pitts and her newborn got the care they needed. They stayed with Pitts’ sister until February, then moved back to Panama City. While her apartment was being restored, Pitts and her kids resided with some locals outside Panama City who opened their home to people displaced by the hurricane.

In the aftermath of Michael, Pitts worries about the next storm. In the 16 years that she lived in Panama City, she never saw a storm as destructive as this, but she plans to be prepared for the next one.

Though her three kids are too young to understand what happened to them, her 7-year-old, who was with his dad during the storm, gets anxious when rain and thunderstorms are in the forecast. Pitts has been challenged by how to talk about hurricanes with her kids.

“It’s hard to soothe them when I don’t have all the answers and I’m not calm myself,” she said. “I feel like I’m lying to my kids sometimes, like, ‘It’s gonna be OK,’ when really I don’t know if it’s going to be OK … I’m trying to reassure myself while reassuring them at the same time.”