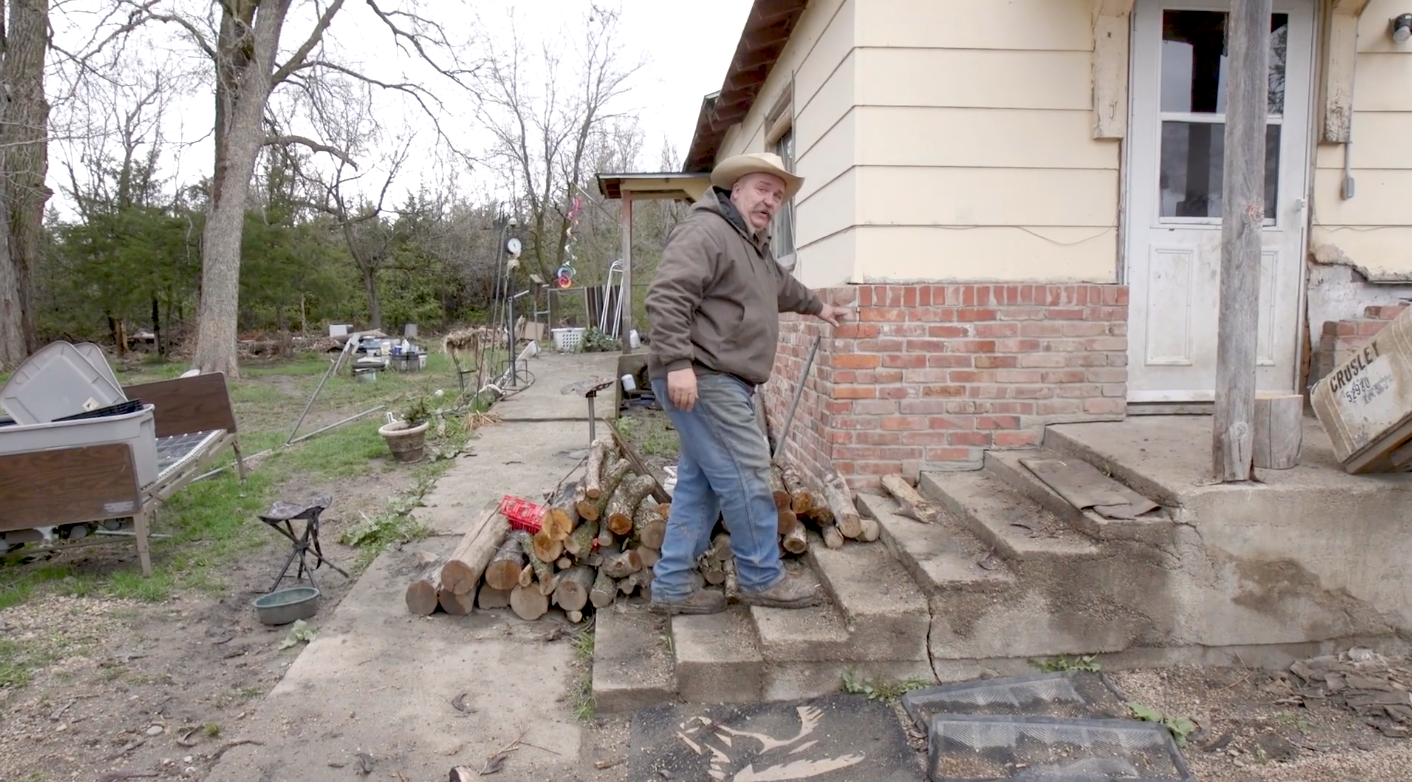 The 16th of 21 stories from the American Climate Project, an InsideClimate News documentary series by videographer Anna Belle Peevey and reporter Neela Banerjee.

NIOBRARA, Nebraska—For years, the third step leading up the Crosley family’s front door was a benchmark for how high a flood could get without arousing concern.

Mike Crosley, a fifth generation member of the Santee Sioux tribe, never saw flood waters go higher than that mark, so he didn’t believe that water from the nearby creek could possibly rise beyond that third step limit to flood his home.

Crosley farmed alfalfa and raised cattle on land that he shared with his parents and three brothers. His wife, Nancy Crosley, said high waters from the Bazile Creek flooded their front yard nearly every spring. “The creek is our nemesis,” she said.

But when the creek slowly rose in March 2019, something felt different.

The Crosleys argued as the water line crept up toward their longtime benchmark. She wanted to evacuate and packed a bag. He said there was no way the water could crest the third step.

But the water continued to rise and Nancy decided it was time to go.

Finally, Mike gave in and they climbed into the pickup truck. Their driveway was underwater, so they had to drive through their muddy fields to the highway, and then took refuge at Mike’s parents’ house, which was on higher ground.

From there, Mike and Nancy could watch the water rise even higher and begin pouring into their home.

“We had a front row view of watching our stuff float by,” Nancy said. “Only thing I’ll say, we were safe.”

The unprecedented flooding in the Great Plains region that Mike and Nancy experienced began with 12 months of above average rainfall. The saturated ground had frozen over the winter and had not yet thawed when Nebraska was hit with a “bomb cyclone” that dropped a massive amount of rain. The stormwater rushed over the still-frozen ground and led to catastrophic flooding all around the Missouri River.

With the warmer water from the creek flowing through the frozen region, snow melted fast and chunks of ice were dislodged. Mike and Nancy watched them float by, along with their possessions, as their house fell victim to the waters.

“It was unbelievable to see the speed at which that water was moving,” Nancy said. “It was fast, fast, furious, relentless. It never stopped, it never slowed up … it was just roaring. And you could hear it. You could feel it just roaring.”

As Mike watched the flood take over his property, his mind was racing as he calculated the loss he would be faced with, between the house, the alfalfa farm and the livestock.

It was a good thing that they were safe and warm, he said, “but just then you start thinking about the financial loss of, what are we losing?”

Scientists have warned that climate change is bringing more frequent and more intense storms, like the deluge that caused the 2019 flooding in the Great Plains. Because they left in such a hurry, the Crosleys didn’t have a chance to put their valuables up on high shelves. The damage to the house was so severe that they simply accepted that most of their belongings would be destroyed.

Looking forward, the Crosleys plan to build a new home on higher ground. Although they never wanted to leave their house—Nancy had just put new shingles on the roof—they decided it was time to start anew.

“It’s not a safe home anymore,” Mike said. “You should feel safe in your home and you’re not going to feel safe there now. Every time it rains in the spring, you’re going to remember that day.”