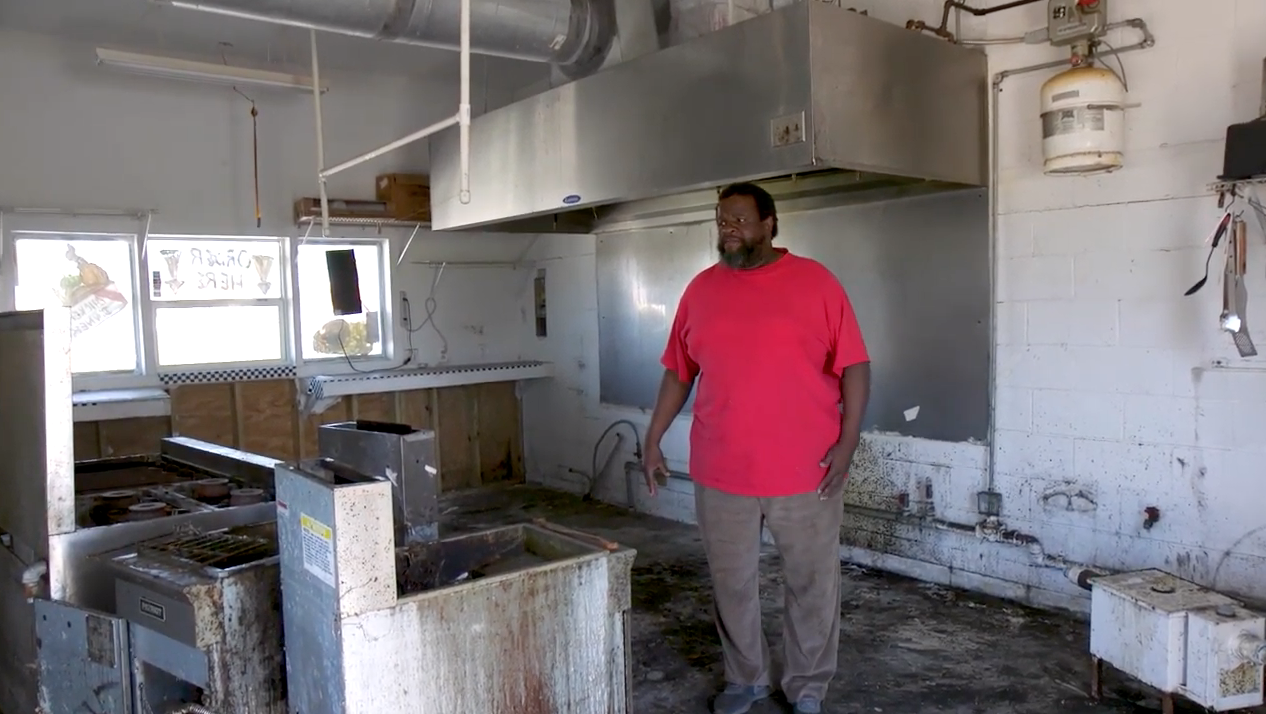 The eighth of 21 stories from the American Climate Project, an InsideClimate News documentary series by videographer Anna Belle Peevey and reporter Neela Banerjee.

PORT SAINT JOE, Florida—As he walked through the remains of his fried chicken and autodetailing business after the devastation of Hurricane Michael, Tan Smiley remembered something his father always told him: You can survive the wind, but you have to watch out for the water.

Smiley grew up in this small Gulf Coast town with his parents, five brothers and four sisters, and they all knew something about hurricanes. But none of them had ever seen anything like Michael, the first Category 5 storm to reach the Florida Panhandle and only the fifth to ever make landfall in the United States.

The hurricane’s 160 mile-per-hour winds and 14-foot storm surge turned Smiley’s entrepreneurialism to ruin. He’d had an auto detailing business for almost 20 years before he added fried chicken to the mix, four years before the storm hit Mexico Beach and Port Saint Joe in October 2018.

When he was a boy, his mom taught him how to cook fried chicken—his favorite food. Once his business instincts were loosed—he also ran a day care center—Smiley intuited the not-so-obvious connection between detailing cars and frying chicken.

“A lot of people would come up and get a wash and vacuum and they would smell the chicken and they decided they was hungry,” he said.

But when Hurricane Michael hit, the mash-up couldn’t survive all the water, as his father had warned him.

“I have rode out of several hurricanes here before,” said Smiley. “But I’d never seen one as severe as the one we just had, Michael.”

At first, he didn’t think much about the weather reports that warned Florida Panhandle residents to take this hurricane seriously. Past storms that Smiley had lived through brought down tree branches and left behind some debris. He didn’t expect Hurricane Michael to be any different.

As the storm approached Port St. Joe, Smiley realized it was going to be bad. He put kitchen equipment in his restaurant up on milk crates to protect it from storm surge. He and his family evacuated to his wife’s parents’ house.

Two days after the storm, Smiley returned to see the damage to his businesses. The milk crates did nothing to protect his equipment from the more than six feet of water that surged into his building.

“All the refrigerators was turned over, all the stoves was turned over,” he said. “All of my machinery that goes to my self-service car wash was submerged … Everything just was a total loss.”

Not only were his businesses destroyed, but Smiley’s double-wide trailer, which he called home for 30 years during his four kids’ childhoods, lost its roof and let in more than 10 inches of rain that fell in the storm.

“We all sat back and watched them as they tore [the trailer] down,” Smiley said. “Even though I’m looking at a brand new one, it really hurt to see it go.”

Seeing the damage to the small town where he lived for 53 years left him in disbelief—homes, businesses, churches and theaters were left in tatters.

“I mean, we looked like a Third World country,” he said. “I could not believe the things that had took place in St. Joe.”

Hurricanes are a part of life in Florida, but climate scientists project that Category 5 storms like Michael will become more common as warming ocean temperatures in the Atlantic fuel stronger hurricanes. With winds over 130 mph, destructive storm surge and colossal downpours, Category 5 storms make coastal residents, like Smiley, question whether their home will be safe in this new normal.

“Very seriously we have considered leaving St. Joe,” Smiley said. “When you got your roots in the ground … it’s hard to get up and leave. We thought about leaving. And we decided to just stay here and do what we got to do to help put St. Joe back together.”