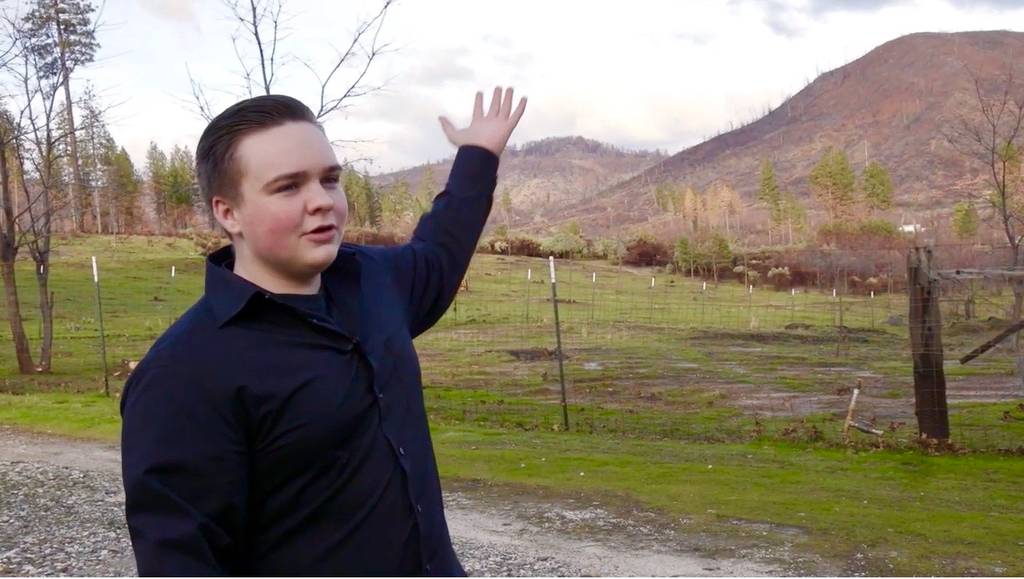 The fourth of 21 stories from the American Climate Project, an InsideClimate News documentary series by videographer Anna Belle Peevey and reporter Neela Banerjee.

CONCOW, California— Daniel Hill woke up at 6 a.m. to get ready for school.

It was Nov. 8, 2018 and nothing was out of the ordinary. He took a shower, combed his hair and got dressed.

Then he walked outside to the car. Smoke was pouring down a mountain in the distance.

“I came in and told my grandma, ‘We have a fire,’” said Daniel, then 14 and living with his grandparents.

His grandmother and grandfather immediately got to work. She alerted the rest of the family and he directed Daniel to rake up the dry pine needles littering the ground.

Daniel remembers telling his grandparents, “‘I don’t think we should go to school.’” His grandmother’s response: “‘Yeah, you’re not going to school today.’”

In a matter of minutes, the Camp Fire was at their doorstep.

Wildfires are a fact of life in California, but this fast-moving and massively destructive fire—it killed at least 85 people and destroyed almost 19,000 structures—was different. Ignited by electrical transmission lines, the November 2018 blaze was fueled by dense, dry underbrush and high winds. The town of Paradise, California, was all but decimated. Daniel lived in nearby Concow, also in the path of destruction.

Temperatures have risen 3.2 degrees Fahrenheit in California since record-keeping began in the late 1800s, and the years-long drought of the past decade combined with the windy autumn season proved a recipe for destruction. The Camp Fire spread at a rate of one football field per second.

Later that morning, Daniel realized his parents’ house, just minutes away, where he had grown up would be destroyed by the fire’s 50-foot flames. But he stayed put, along with members of his family, to protect his grandparents’ house and shelter others.

“I was scared,” he said. “It was frightening. You know, I’ve never seen something of a catastrophe at that level. It was horrible.”

He stayed up late with his family, taking shifts to check for spot fires and to put out embers that came too close to the house. Finally, at around 4 a.m., he went to sleep.

When he woke up the next morning, all of the horrors from the day before came flooding back. “It’s like, ‘Oh yeah, that happened.’” he said. “It became more real at the time.”

The following weeks were filled with stress. He called and messaged one of his friends from school and got no answer for three weeks. Then, one day, his friend just “showed up.”

The nearby mall became a makeshift school, where Daniel and his schoolmates did coursework on donated laptops. Daniel and his dad returned to their neighborhood to help clear fallen trees off the roads and catalogue which houses were still standing.

“You know, “‘That’s Andy’s house. That’s Dave’s house.’” Daniel remembered thinking. “And then we got to our house and I was like, ‘I can’t do this.’”

The house had completely burned to the ground. The only identifiable things Daniel could find were pieces of pottery and some keys that had been a gift from his dad to his stepmom. Among the possessions Daniel lost was his collection of “Magic: The Gathering” cards that he stored under his bed.

“I lost a lot in that fire,” Daniel said. “But, you know, I can’t complain because everybody else did, too.”