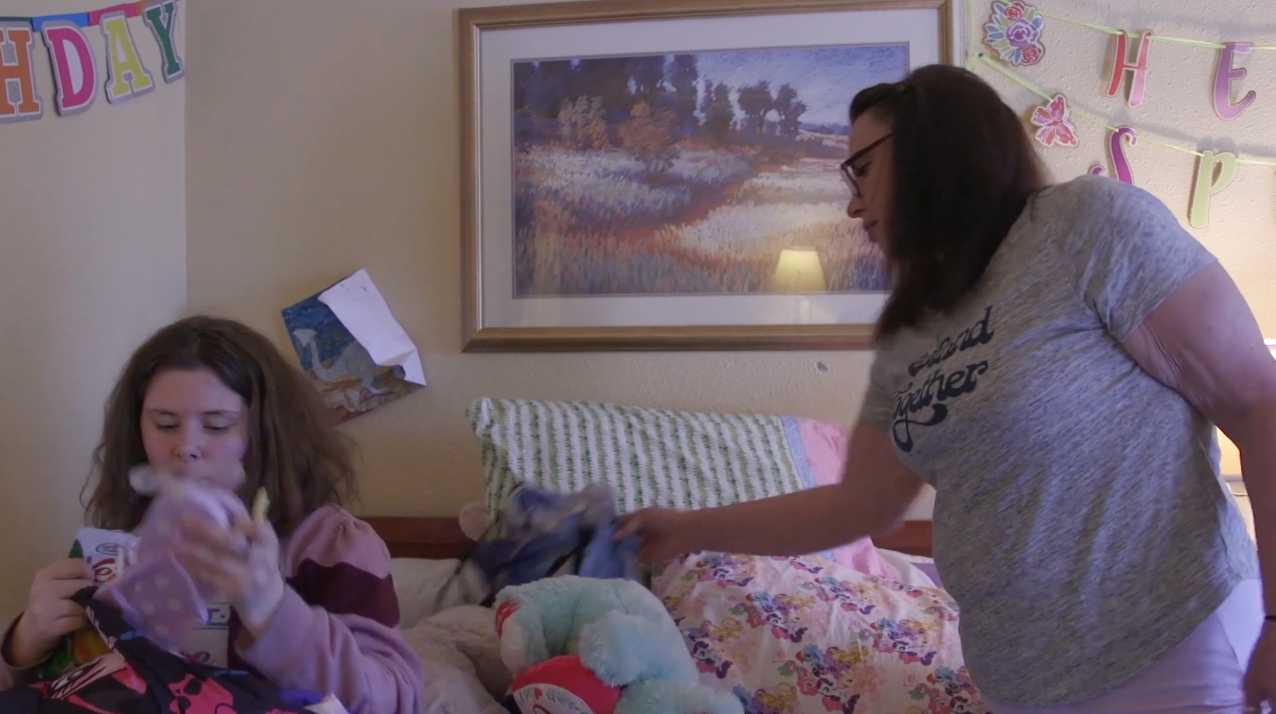 The 18th of 21 stories from the American Climate Project, an InsideClimate News documentary series by videographer Anna Belle Peevey and reporter Neela Banerjee.

PARADISE, California—Paradise was a sleepy little town, Holly Ratliff remembers, but it was special to her.

She always saw someone she knew at the grocery store. When she brought her three children to school, she waved at the other moms that she knew well. Her kids played soccer, went to parades and loved to ice skate.

After the Camp Fire in 2018, Ratliff struggled with a feeling of homesickness for a place that no longer existed.

“I hate to talk about it in past tense, you know? But Paradise is just home,” Ratliff said. “Was home.”

Paradise had been through fires before. Precautionary evacuations were normal—Ratliff would bring her animals and mementos, but always returned home.

“We had fires all the time,” she said. “So you get kind of desensitized to it.”

Still, Ratliff was aware a big fire could happen.

On the morning of Nov. 8, 2018, her kids went to school with a friend. A few hours later, Ratliff was stuck in standstill traffic with people running from the most destructive fire in California’s history.

The Camp Fire burned big partly because of the dry conditions that turned the region into a tinderbox. Ordinarily, autumn rains stifle the fire season in late October, but with climate change, this has been happening later in the year. A 2019 study found that the average area burned annually by wildfire in California has increased fivefold since the early 1970s, largely because of the dry conditions connected with climate change.

As Ratliff tried to evacuate Paradise by car, the wind whipped ferociously and the popping sound of propane tanks as they exploded was deafening.

“I just screamed for my life and I resigned to the fact that we weren’t gonna make it,” she said. “I was trying to think, how am I going to tell my kids I love them? Because everything is going to burn.”

When embers began to fall around the car, Ratliff decided it was time to get out and run. She was able to get her two younger kids, Micah and Maisy, from her friend on the way out of town. But her oldest, Mariah, was evacuating with her teacher.

“We ran for our lives and for our kid’s lives because I realized, I’m not going to die in a car. I’ll die running,” she said.

After running through traffic, Ratliff and her family hitched a ride out of town in the bed of a pickup truck. She shielded the kids from the falling embers while they cried for their pets and stuffed animals left behind.

Once they were evacuated, Ratliff was able to reunite with Mariah. The family met Ratliff’s niece in a parking lot and decided to stay the night in her college housing. But for Ratliff, sleeping after her traumatic evacuation was out of the question. Every sound reminded her of the fire. Even the creaking vent in the bathroom sounded like the popping propane tanks.

“I wanted to comfort my kids but I didn’t know how. I can’t tell them that everything’s going to be OK,” she said. “We were watching on TV as they were saying, you know, how many houses, and how many lives. It’s all such a blur. I don’t remember sleeping.”

For nine months after the fire, Ratliff and her kids lived in a small motel room with two beds in neighboring Chico. With no personal space and little room for comfort, she could not properly recover from the fire.

While thinking about where to bring her family next, Ratliff remembers noticing Roseburg, Oregon, on a map. She was stressed about making the right decision for her kids, who were struggling with the loss of their home and a disrupted school year. But with money from her renter’s insurance, she was able to buy a home there, some 300 miles north of Paradise.

“I was just trying to find a place to call home. This place had tons of work that needed to be done, it wasn’t that pretty, it’s a mobile home,” she said in a recent telephone interview. “But I was like, there was a time we were about to live in a tent, so that puts it in perspective. I’m so proud of my family for how far we’ve come.”

A year and a half after the Camp Fire, Ratliff still tenses up when she hears a gunshot or  fireworks that remind her of the popping noises from the fire. She still feels homesick for Paradise, but she and her kids love their new home and town.

Many of the items in her new house were donated, Ratliff said. She thinks of the generosity of friends and strangers when she uses things like her toaster and her colander. Nearly everything from her old house was lost, including their pets and an urn that contained the ashes of her son, who she miscarried 17 weeks into a pregnancy in 2007.

“In the ashes, we found a little medallion that was on his [urn],” she said, “and that gave me peace.”