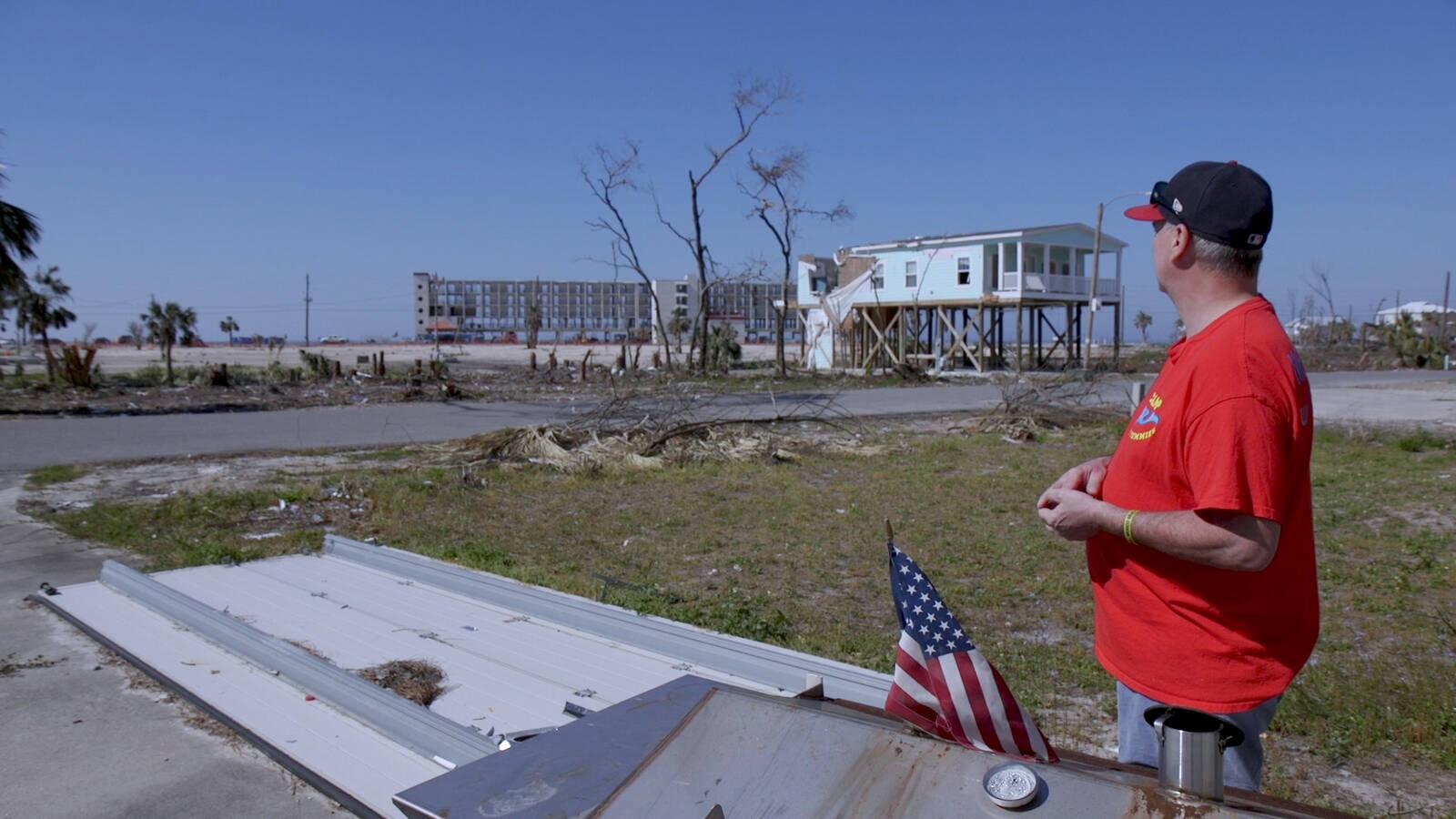 The 14th of 21 stories from the American Climate Project, an InsideClimate News documentary series by videographer Anna Belle Peevey and reporter Neela Banerjee.

MEXICO BEACH, Florida—Waiting out a Category 5 storm was not on Hal Summers’ bucket list.

But in the days leading up to Oct. 10, 2018, Hurricane Michael did not seem like it would turn out to be the first storm of such magnitude to hit the Florida Panhandle, where Summers had lived in Mexico Beach for 11 years.

“I thought I would be safe in my parents’ place,” Summers said. “I could ride it out there.”

Summers and his cat, Mr. Red, hunkered down there as his folks fled in their RV. He felt certain that the house, built of stone, would protect them from the wind. If water came inside, he planned to seek refuge in the attic with Mr. Red.

It took just two days for the storm to intensify from Category 1 to Category 5, with 160 mph winds.

Two hours before the storm struck, Summers’ parents texted him to ask whether their 73-year-old neighbor, Frank, and his two dogs could join him. So it was that Summers, Frank and their three animals hunkered down and watched TV until the power went out.

Less than an hour into the storm, Summers felt water at his feet. The storm surge poured into the boarded-up home. In a matter of 10 minutes, the water rose from Summers’ waist to his neck.

“We can’t stay in this house because we’re going to drown,” Summers remembers saying to Frank. “We probably have to go outside to the roof.”

The pair waded outside. Summers held Mr. Red on his shoulders. He slipped and fell outside an elevated  outdoor bathroom. Frank helped him up and they changed their plan, deciding to shelter inside the outdoor bathroom with the cat and the two dogs.

“We can get in there, we can stand, we can survive,” Summers remembers thinking.

The elements that made hurricane Michael uniquely destructive align with scientists’ warnings about a warming climate. Warmer ocean temperatures fuel more intense hurricanes, which scientists expect will lead to more Category 4 and 5 storms. Rising seas from glacial ice melt intensify a storm surge—which was ultimately what forced Summers and Frank out of the house. The two men and three animals all survived the storm. The next morning, Summers walked around town to survey the damage.

“I honestly thought I was the only person alive because it looked like a bomb had gone off,” Summers said.

Killer Seafood, the restaurant where he worked, was gone. A house sat in the middle of the road. Parts of the highway were ripped away. He saw three houses on fire, but there was no water to try and extinguish the blaze.

“I felt helpless,” he said. “It was just like such an eerie feeling.”

Although Summers never intended to wait out a hurricane, after this experience he is sure he will never do it again. If another storm heads toward Mexico Beach, he will evacuate.