President Donald Trump has a notorious for appetite for cable news, and this week, a bipartisan group hopes to catch his attention when it airs the first in a series of advertisements calling for action on climate change.

The ads are part of a nascent effort to sway conservative and moderate voters at a time when the Trump administration is moving to loosen environmental protections.

Earlier this year, a group of prominent Republicans made a splash by proposing a carbon tax, which would tax carbon dioxide emissions from fossil fuels and send the revenues back to individuals and families, in exchange for the repeal of regulations on industry.

This time, it is the bipartisan Partnership for Responsible Growth—also an advocate of a carbon tax—led by George Frampton, a longtime conservationist and lawyer who was a key environmental aide in the Clinton administration.

The ads don’t explicitly talk about a carbon tax, opting instead for the vague phrase: “free market solution to climate change.”

“We wanted to run these ads to combat the deluge of fossil fuel advertising in [Washington] D.C.,” Frampton said in a statement. “It matters what people see every day, and policymakers are surrounded with the message that we can continue with business as usual. That’s simply false, and it’s dangerous.”

The first ad, which will air for a week on CNN, Fox News and MSNBC, begins with a shot of a man in a dentist’s chair, and a narrator saying, “if 97 percent of all dentists told you a tooth couldn’t be saved, you’d pull that tooth.” It then runs through a series of comparisons to drive home the scientific consensus on climate change and invites viewers to go to the website pricecarbon.org, where the group describes its carbon tax message.

So far, Republicans in Congress have been reticent to even talk about a carbon tax, even though many economists and business leaders support the idea. There has been no sign that Trump or his economic advisers are considering it as part of their broad proposals to rewrite the tax code.

Instead, the Trump administration’s energy and environment policies promote unrestricted development of fossil fuels and work to dismantle Barack Obama’s entire Climate Action Plan. Many of Trump’s appointees have publicly questioned the mainstream consensus that climate change is an urgent problem, including EPA Administrator Scott Pruitt, who has denied that carbon dioxide is the primary cause of warming.

But there are signs that some Republicans are worried the party line is out of touch with many voters.

“A lot of the Republican activists get it,” said Peter Bryn, who is in charge of working with conservatives for the Citizens Climate Lobby, a grassroots advocacy group that favors a carbon tax. “Climate change may not be at the top of their priority list, but they understand the issue,” he said during a conference call publicizing the ads.

In March, a group of 17 House Republicans introduced a resolution acknowledging the science on climate change and calling for some kind of action. But the resolution offered no specific approach  beyond “working constructively” on an “economically viable, and broadly supported” solution.

In an interview with the Intercept last week, conservative activist Jerry Taylor said there are between 40 and 50 Republicans in the House and 10 and 12 in the Senate who do not agree with the GOP’s position on climate change. “They’re all looking for a way out of the denialist penitentiary they’ve been put into by the Tea Party,” he told the Intercept.

Taylor, who used to reject the science behind climate change as a vice president at the libertarian Cato Institute, now works to promote conservative action on warming. On the call publicizing the ads, Taylor said he hopes they will help lay a foundation for a conversation based on the science rather than spin.

The Partnership for Responsible Growth has prepared four more ads and hopes to run them year round in the Washington, D.C., area, with the second appearing next week. 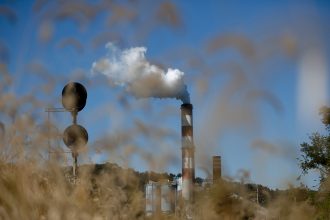