President Obama hopes his three-day tour of Alaska this week highlights the devastating impacts of climate change in the Arctic, even though it comes just two weeks after he approved a permit for Shell to drill for oil in the Chukchi Sea. That move has generated ire from many environmentalists who see this trip as hypocritical.

But the conflicting actions demonstrate the grey area Obama is attempting to navigate around climate change: He is fighting for global warming action, particularly in the months before international climate treaty talks in Paris begin in December, while at the same time supporting one of the nation’s most profitable industries and the foundation of its energy system.

And it is a struggle that the people of Alaska are all too familiar with, perhaps more so than in any other state.

Alaska has warmed 3.4 degrees Fahrenheit in the last half-century—twice the national average. Entire coastal towns have been relocated due to rising sea levels. As the state’s permafrost melts, hundreds of miles of roads, airstrips and other transportation infrastructure have collapsed under the sinking soil. But Alaska is also highly dependent on fossil fuels. With no income or sales tax, nearly 90 percent of the state’s operating budget comes from the oil and gas industry and one-third of its jobs are tied to fossil fuel extraction.

“Alaskans are already living with [climate change’s] effects,” Obama said in his weekly address on Saturday. “More frequent and extensive wildfires. Bigger storm surges as sea ice melts faster. Some of the swiftest shoreline erosion in the world—in some places, more than three feet a year… Even as we accelerate this transition [to renewable energy], our economy still has to rely on oil and gas.”

These conflicting, complex factors have left communities in the northernmost state of the union divided over the issue of climate change. Sixty-two percent of Alaskans acknowledge global warming is happening, but only 45 percent attribute it to human activities, predominantly the burning of fossil fuels, according to estimates and polling data analysis by Yale University.

“People are struggling to reconcile the impacts of climate change they see every day with the very real human intuition to stick with the status quo, in this case with the industry that has supported our state financially for decades,” said Jim Adams, policy director for the conservation organization Audubon Alaska.

Groups on both sides of the issue are taking Obama’s visit as an opportunity to make their point.

The group reiterated the point in a letter sent to the President on Friday. “History has shown us that the responsible energy development which is the lifeblood of our economy can exist in tandem with, and significant enhance, our traditional way of life,” leaders of the group wrote.

But in an op-ed in The Guardian on Monday, Inupiaq Eskimo artist Othniel Art Oomittuk Jr. wrote, “Using the oil locked in the Arctic Ocean will accelerate climate change. Climate change is already here for us. The ice has changed. It comes late, it leaves early.” Dozens of other environmental groups in the region have come out against Obama’s approval of Arctic offshore drilling.

Obama began his trip Monday by speaking at the Conference on Global Leadership in the Arctic: Cooperation, Innovation, Engagement and Resilience (GLACIER). The gathering of 21 international leaders was organized by Secretary of State John Kerry to discuss the Arctic’s climate challenges.

“The United States recognizes our role in creating this problem, and we embrace our responsibility to help solve it,” Obama told the foreign ministers and delegates gathered in Anchorage. “And I believe we can solve it. That’s the good news. Even if we cannot reverse the damage that we’ve already caused, we have the means—the scientific imagination and technological innovation—to avoid irreparable harm.”

Obama will skip across the state through Wednesday, hiking in Kenai Fjords National Park in Seward, meeting with salmon fishermen in Dillingham, examining rapid coastal erosion in Kotzebue, and talking with indigenous leaders at various stops along the way. At some point, he will also film a segment for the NBC reality show “Running Wild With Bear Grylls” observing the impacts of climate change. Obama is the first sitting president to visit Alaska. 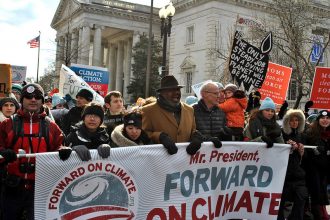 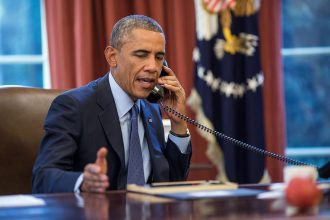