Warm sea temperatures are persisting in the North Pacific longer than at any other time on record, according to a new study published this week, and it is having a dramatic effect on distribution of marine life.

In the last year and a half the northeastern part of the Pacific Ocean, between Hawaii and the mainland of North America, has been warmer than at any time since 1900, when such record-keeping began. Sea temperatures there are between 5 degrees to 9 degrees Fahrenheit higher than is typical for this time of the year.

A study published Monday in the Proceedings of the National Academy of Sciences by researchers at the University of Exeter in England explores this climate pattern, which has in turn changed the habitats of sea life. Many subarctic species unable to adapt to warmer temperatures are seeking colder waters, displacing some populations by thousands of miles. Some squid and tuna that are typically found off the coast of Southern California are now being seen as far north as the coast of Oregon and Washington.

Over the last several decades, the world’s oceans, including the North Pacific, have been warming at an unprecedented pace. Typically, oceans go through a warming-and-cooling cycle that can last a few years to decades—a relatively short period in climate research. But increasingly, the extreme temperatures are becoming longer-lived, the Exeter researchers have found.

Chris Boulton, lead author of the study, used a ball-in-a-bowl analogy to explain the findings. Toward the earlier part of the century, the temperature fluctuations were similar to a ball rolling back and forth in a bowl, he said. The ball would roll over to one edge of the bowl—representing higher sea temperatures—only to roll back to the center and then quickly to the other edge. But in the last few decades, the bowl has gotten flatter and the ball is rolling much more slowly. When it reaches the edge of the bowl, it stays there longer—where the warmer temperatures last for longer periods of time.

“You don’t see that toward the start of the [last] century,” said Boulton. “You might start to see those events happening in more extremes compared to what has happened in the last 100 years.”

As temperatures rise, the seas expand, also contributing marginally to sea level, which is rising mostly because of melting ice caps and glaciers.

In the large expanse of abnormally warm water in the North Pacific dubbed “the blob” by oceanographers, the displacement of fish species has disrupted the marine food web. Baby sea lions, which feed on anchovies, squid and shellfish, don’t have the strength to swim further to catch food. As a result, thousands have been washing up onshore in record numbers this year, prompting the National Oceanic and Atmospheric Administration to declare it an “unusual mortality event.”

The changes in sea temperatures are also impacting the fishing industry, forcing it to travel further to reach fish populations that have moved away from their traditional waters. Researchers have predicted that with worsening climate change, marine fisheries will face higher costs and lower productivity.

That trend is already evident in the Pacific Northwest, where a double whammy of drought and warmer waters has caused massive Chinook salmon die-offs in the Sacramento River.

The study also offers an explanation for the dramatic decline in salmon production in the North Pacific in 1977 and again in 1989. That shift in population can be attributed to the persistence of warmer temperatures in the ocean, according to Boulton.

Other studies have assessed warmer temperatures in the Pacific, but they were mostly restricted to small coastal regions.

“This paper is the first to show it from the perspective of the whole North Pacific,” said Nathan Mantua, a research scientist with National Oceanic and Atmospheric Administration’s Southwest Fisheries Science Center.The North Pacific basin extends from Japan to California and is bounded on the south by the equator. The region is about 30 million square miles.

“The contribution here is that … you can look at the temperature field across the whole North Pacific and see this kind of behavior being expressed,” said Mantua. “It’s not just in these particular patterns, it’s more general than that.”

Mantua cautioned that the study does not explore how long the current warmer temperatures will last, nor whether the oceans have already reversed course and are beginning to get colder.

The study also does not investigate how specific species are reacting to the changing temperatures. It’s an area of research that Boulton says he’s interested in exploring next. 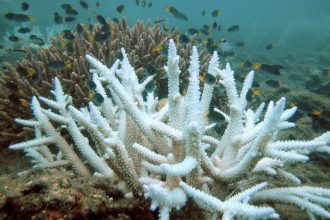 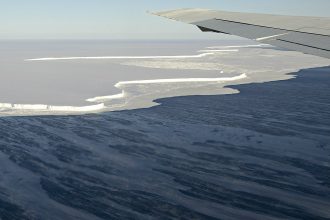