The Midwest’s utilities managed their way through a deep freeze this week with few major service interruptions in part by working with customers to reduce demand.

There were a few problems, with wires down in the Chicago area and a fire at a natural gas compressor station in Michigan, but overall the system coped with the cold and increased demand.

Utilities in some of the coldest parts of the Midwest and grid operators say their preparations before the temperature plunged below zero were informed by lessons from cold snaps in 2014 and 2018. Those events illuminated some of the problems and workarounds of managing a grid that relies increasingly on natural gas and renewables, and less on coal.

Their performance this week will be closely scrutinized as the Trump administration seeks support for its idea that coal and nuclear plants are essential for the country’s energy security.

Energy Secretary Rick Perry has argued that coal and nuclear plants, because they can keep weeks or even months of fuel on site, are necessary to maintain the reliability of the electricity system during emergencies that may arise from weather, cyberattacks or other threats. The administration has weighed issuing a rare emergency order to prop up failing fossil fuel plants.

For those concerns to be borne out this week, however, there likely would have needed to be a major incident in which electricity demand exceeded supply, leading grid operators and utilities to force unplanned outages for large numbers of customers. Considering the cold temperatures, this would have been a crisis for the people affected.

But that didn’t come close to happening.

Energy analysts and environmental advocates say there is little reliability benefit to plants having their fuel on site because utilities and power grids have adapted to greater variability.

“There’s no reason to think coal performs better than any of the other systems,” said Jeremy Richardson, a senior energy analyst for the Union of Concerned Scientists.

All power sources are at risk of weather-related outages, including coal and nuclear plants. For example, a reactor at the Salem Nuclear Power Plant in New Jersey had to shut down this week because of ice accumulation on screens that filter water going into the plant. And coal piles can freeze in severe weather.

Renewable energy is a growing power source in the Midwest region. Some renewable energy was affected on Thursday, mostly because of low winds in areas, with some issues of icing, according to PJM Interconnection, which manages the grid that runs from Illinois to New Jersey. Other resources pick up the slack during the hours needed.

Almost All Outages Were Power Lines and Pipes

Grid operators are responsible for making sure electricity supply meets demand, and they build in extra reserves so there is little danger of the system failing.

Outages occur, but mostly because of problems with the power lines and pipes that deliver the electricity and natural gas.

“Are we glad we have coal because it’s cold right now? No. We’re glad we have the generation to meet our needs, and we’re really glad that our wires aren’t falling down,” said Frederick Weston, principal and director of policy for the Regulatory Assistance Project, a nonprofit that advises utility regulators.

‘We Were Nowhere Near Our Maximum Capacity’

For grid operator PJM Interconnection, managing the electricity generation system was a challenge this week, but there was no danger that demand would outstrip the available electricity supply, said Michael Bryson, vice president of operations.

“We were nowhere near our maximum capacity,” he said.

PJM hit its highest electricity demand of the week on Thursday morning, when the cold wave was hitting several population centers, but this level was well short of record winter demand spikes.

If temperatures had been lower and electricity demand higher, PJM and utilities have strategies for managing their systems that were developed after a 2014 cold snap.

That year’s cold led to an uncomfortably close call, with the electricity demand almost exceeding the supply, which would have led to forced outages. One problem was that many power plants that should have been available were not. In a subsequent analysis, PJM found that much of the unavailable power plant capacity was because natural gas supplies were not flowing to those plants due to constraints in their delivery systems.

But the problems went beyond gas. Of the 40,200 megawatts that were not available then, 19,000 were at natural gas plants and 13,700 were at coal plants, followed by other fuels.

The issues in 2014 led to changes in the way PJM communicates with power plants before severe weather to verify their availability, and to improved coordination between the natural gas and electricity systems to monitor the flow of gas to power plants.

Another big difference today is that grid operators and utilities have expanded their programs that work with customers to reduce energy usage at times of high demand. These “demand response” programs include contracts in which businesses and institutions get paid for agreeing to reduce their use when called upon.

PJM could have handled a much colder week, in part because of agreements with customers to reduce power use. These agreements add up to 4,800 megawatts, up from 1,500 megawatts in 2014, Bryson said. The forecasted peak demand for the entire PJM territory on Thursday was 139,950 megawatts.

Xcel Energy in Minnesota asked its natural gas customers to turn their thermostats down in response to a low gas supply in part of its system. In Michigan, a fire at a natural gas compressor station led Consumers Energy to ask automakers to temporarily shut down factories so there would be enough gas for heating homes and other businesses.

The compressor fire and other energy concerns led Gov. Gretchen Whitmer on Friday to order state regulators to investigate the state’s energy supply and preparedness. She said the study is timely because of the increasing frequency of extreme weather, which she said is likely a result of climate change.

Consumers Energy, which has a natural gas and an electricity utility, is seeking approval for a plan to increase renewable energy and phase out use of coal by 2040. A few cold days will not change that trajectory, said spokesman Brian Wheeler.

“As long as we’re responsible in taking the right steps toward renewable energy, we will still have the electricity people need, even on days like today,” he said. 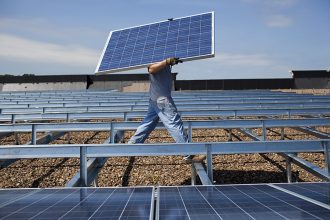