The ads were hard to miss for anyone taking the subway in Washington, D.C.—particularly someone working at the White House, the State Department or Congress.

They included images of children waving the American and Canadian flags, a green mountain with a river running through it, and construction workers building a new pipeline in Texas.

The ads in some of the capital’s busiest Metro stations are but a small part of an aggressive, ongoing campaign that targets the most powerful people in Washington. The goal: President Obama’s approval for the Keystone XL pipeline, a major expansion project that could bring more of Canada’s carbon-intensive tar sands oil into the United States.

Prime Minister Stephen Harper’s government has set aside $22.7 million for an advertising blitz this year to promote oil and Canada’s other natural resources in the United States, Europe and Asia. But scientists and environmental groups say the advertising message is misleading its target audience about the Canadian government’s failure to clean up the oil sands, Canada’s fastest growing source of greenhouse gas emissions.

“Those [advertising] messages aren’t accompanied by any changes in policy—they’re basically defending Canada’s current record, which we know to be quite poor when it comes to climate,” said Danielle Droitsch, the Canada project director for the Natural Resources Defense Council, a U.S. environmental group that has criticized the Keystone pipeline project and the expansion of Canada’s oil sands industry.

Environment Canada, the Canadian counterpart to the U.S. Environmental Protection Agency, recently issued a report that projected a 42 percent cut in its pollution management and mitigation programs before the 2016-17 fiscal year. A labor union representing federal scientists, the Professional Institute of the Public Service of Canada, has estimated the Canadian government is in the middle of a three-year purge, cutting nearly $3 billion in spending and up to 5,000 jobs from its science-based departments.

Meanwhile, Canada’s advertising campaign—which includes the pro-oil sands government website gowithcanada.ca—touts Canada as a reliable partner and a “world environmental leader in the oil and gas sector.” It also boasts of a new oil sands monitoring system “founded on science and transparency.”

Harper’s government defends the campaign, saying it wants to ensure that other countries get all the facts. But one fact the ads don’t mention is that the oil sands industry’s rising carbon footprint is projected to wipe out reductions elsewhere in Canada’s economy, putting Harper’s commitment to reduce annual emissions to about 3 percent above 1990 levels by 2020 out of reach.

Environment Canada estimates that greenhouse gases from the oil sands industry grew by 62 percent from 2005-2011. They are projected to grow a further 84 percent by 2020.

Harper has repeatedly pledged, but delayed, introducing rules to reduce those greenhouse gases. At the same time, his government dismantled a team of seven specialists who helped design the oil sands monitoring program. They also had the expertise to draft credible tests and regulations for air pollution and greenhouse gases in the oil sands. The government eliminated their jobs, forcing some into early retirement or transfers.

It has also apparently prevented the remaining three members from using all their skills to tackle the environmental challenges in the oil sands. An internal email, distributed within Environment Canada’s Emissions Research and Measurement Section (ERMS), revealed that the section’s manager couldn’t find any work for the specialists in the new federal and provincial Joint Oil Sands Monitoring (JOSM) initiative that the government promotes in its advertising campaign.

“All of the staff are affected by the fact that there is no oil sands work…as a result of the changes,” wrote the manager, Fred Hendren, in the leaked email sent on April 14. “The intent is to find permanent duties for all of the staff.”

Environment Canada confirmed that the joint monitoring plan won’t be testing stack emissions directly from the source. Instead, the plan will test ambient air “at some distance from sources.”

Former members of the emissions research team, speaking through their union, have urged the government to allow them to measure emissions directly from stacks, in order to establish baseline data on mercury and other substances. The union said that would also allow the government to collect other information it needs to draw up credible regulations to reduce air pollution, water pollution and greenhouse gases.

But the union representing the scientists said the absence of independent data will compromise the credibility of any new regulations.

With the internal team disbanded, the department now hires consultants when it needs emissions research.

“When you cut an entire group and then simply farm it out to an outside contractor that really isn’t even qualified to do that work, that to me smacks of incompetence,” said local union president Stephen Vanneste. “But it’s also pretty mean-spirited. There’s no good intention there.”

The union said it is looking into possible grievances but needs one of the government scientists or engineers to make a formal complaint.

“People are very reluctant to stick their neck out because they are very much afraid—and justifiably so—that they’re going to get their heads cut off,” Vanneste said.

The Canadian government’s advertising also fails to mention some of the new peer-reviewed research emerging from the oil sands as part of the new monitoring program.

Those include studies that have documented rising toxic pollution such as mercury and cancer-linked compounds around oil sands production. But in most cases, the government scientists that have produced this research were unavailable for interviews, feeding into criticism that Harper is muzzling scientists who produce inconvenient research for industry. The allegations prompted a probe launched last year by a federal watchdog.

An industry spokesman told InsideClimate News that he wasn’t aware of recent cases of alleged muzzling of scientists. He said the industry supports transparency and wants scientists to provide context about their research and data, which is featured on the monitoring plan’s online public website.

“That’s really the foundation that we’ve been [doing by] trying to increase the level of transparency of all of the monitoring in that region,” said Greg Stringham, vice president of oil sands and markets at the Canadian Association of Petroleum Producers.

The oil sands are natural deposits of bitumen—a tar-like heavy oil—mixed with sand under forests in  northern Alberta. It takes massive amounts of water and energy to extract and process the oil, leaving a significant footprint on the surrounding water, air, wildlife and climate.

Stephane McLachlan, a professor of environmental science at the University of Manitoba, has praised his peers in government for doing credible research but he is concerned that the joint monitoring plan fails to examine human health impacts.

“It’s the hot potato that no one wants to hold,” said McLachlan.

He said his own research, examining consumption habits of local aboriginal communities and their traditional sources of food, found additional evidence of toxins accumulating in ducks, fish and some mammals that are putting human health at risk.

McLachlan said he felt compelled to release the data prior to peer review because of those risks.

It declined a request for an interview with one of its experts.

Environment Canada has also declined interviews with scientists who published recent peer-reviewed papers on mercury contamination. It didn’t provide an explanation for the lack of media access but instead provided written statements that downplay some aspects of the evidence.

The Harper government previously spent at least $9 million on a domestic ad campaign in 2012 to convince Canadians it was promoting economic growth while “maintaining high environmental protection standards.” These ads followed a first round of budget cuts to environmental monitoring programs, combined with new laws that reduced federal oversight.

Meantime, there’s no sign that public relations and marketing efforts are slowing down. The Harper government is paying international public relations firm Fleishman-Hillard at least $5 million to plan and manage the campaign. It recently renewed the firm’s contract until 2015, which could mean more ads are on the way.

“Often when we talk with decision makers on Capitol Hill, they also have observed that there really isn’t a difference between the government of Canada and the tar sands industry,” said Droitsch, the NRDC Canada project director. “I think that for those members of Congress who are concerned about the tar sands issue, it hasn’t helped Canada [and the industry] to be so closely aligned.” 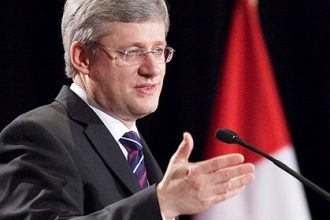