In a rare moment of good news coming from this week’s Conference of the Parties climate summit in Glasgow, more than 100 nations have pledged to cut global methane emissions by 30 percent or more between now and 2030 in an effort to quickly and significantly curb global warming.

The announcement marking the official launch of the U.S.-European Union led Global Methane Pledge came as the Biden administration took a key step on Tuesday toward meeting the reduction goal with a draft of stringent new methane regulations for the oil and gas industry released by the Environmental Protection Agency in Washington.

Methane is the second leading driver of climate change, having contributed 0.5 degrees of the 1.1 degrees of human-induced warming since pre-industrial times, according to the latest assessment by the U.N.’s Intergovernmental Panel on Climate Change.

On a pound for pound basis, methane is an 81 times more potent greenhouse gas over the near term than carbon dioxide, the leading cause of global warming. Reducing methane emissions is widely seen as the best chance to quickly curb global warming due to the relatively short time the gas remains in the atmosphere.

If emissions reductions outlined in the pledge are achieved, 0.2 degrees of additional warming will be avoided by 2050. Conversely, any cuts made to carbon dioxide today would not yield any climate benefits until after 2050.

The global methane pledge was first introduced in September when seven countries signaled their intent to join the U.S. and the EU. The 105 nations that have now signed the pledge represent roughly half of global methane emissions from human activity and approximately 70 percent of the world’s economy. The pledge is non-binding and does not set specific targets for individual nations but rather sets a collective, global target of a 30 percent emissions reduction.

Canada became the first country to back up its pledge with specific emissions reductions targets last month when Jonathan Wilkinson, Canada’s minister of environment and climate change, pledged cuts in methane emissions from the oil and gas sector of at least 75 percent below 2012 levels by 2030.

The U.S. went a step further on Tuesday when the EPA released draft regulations that would reduce methane emissions from the oil and gas sector by a similar amount, a 74 percent reduction by 2030 compared to emissions in 2005.

The planned rules for oil and gas would apply to all industry sites, including more than 300,000 existing wells—not just new facilities, as President Barack Obama’s original regulations would have done.

The rules stop short of imposing a ban on the flaring of methane, but the EPA has made clear that it intends to supplement the proposal next year and environmentalists indicated that they will push to strengthen its regulations.

The American Petroleum Institute, the largest industry group, reacted cautiously to the proposal, calling it “sweeping” and indicating it would study the plan more closely. “We will continue working with the agency to help shape a final rule that is effective, feasible and designed to encourage further innovation,” said Frank Macchiarola, API’s senior vice president for regulatory affairs.

Meanwhile, the U.S. Department of Transportation finalized a regulation first proposed 10 years ago to expand federal oversight of gas pipelines, which have been the site not only of leaks but of accidents and explosions. If finalized, 425,000 additional miles of pipeline would be subject to federal reporting requirements. And the U.S. Department of Agriculture initiated new programs to address work with farmers and ranchers to reduce methane in agriculture, which is second only to the oil and gas industry in emissions of the gas in the United States.

Speaking in Glasgow at the Global Methane Pledge event, Biden sounded his frequent refrain that climate action and jobs creation go hand-in-hand. “This isn’t just something we have to do to protect our environment and our future,” Biden said. “It’s an enormous opportunity for all of us, all of our nations to create jobs and make meeting climate goals a core part of our global economic recovery.”

But Biden hasn’t had success in getting the teeth he would like in his methane plan, as a narrowly divided Congress is still fighting over the White House’s proposal for a methane fee to  give industry an additional economic incentive to cut emissions. Senate Environment Committee Chairman Tom Carper (D-Del.) praised the new EPA regulation, but promised to continue to push for the fee as Congress works to enact Biden’s “Build Back Better” plan.

“Our program is complementary to EPA’s rule and a critical part of meeting the president’s climate goals,” he said.

Meanwhile, at the climate talks, Brazil, one of the leading methane-emitting countries,  signed onto the Global Methane Pledge in what was viewed as a significant development. Brazil’s president, Jair Bolsonaro, is being accused of crimes against humanity in part for policies that allow deforestation in the Amazon.

“It’s very significant to have a country like Brazil on board and to me signals that countries realize there are benefits to being part of this global effort,” said Sarah Smith, super-pollutants program director with the Clean Air Task Force, based in Boston.  “The countries that sign up will have early access to technology and policy support and financing from organizations around the world.”

Philanthropic organizations led by the William and Flora Hewlett Foundation have pledged more than $325 million to help countries reduce their emissions.

Durwood Zaelke, president of the Institute for Governance and Sustainable Development, said Tuesday’s announcement was “the first salvo in a new front in the climate war” to quickly address near-term warming.

Zaelke conceded that countries may fail to uphold their pledges in the same way that nations have failed since 2015 to meet their Paris climate commitments. However, he said he feels it is inevitable that the Global Methane Pledge will become more binding through financial repercussions for countries that do not comply.

“I think you will see the world move toward a border tax strategy,” Zaelke said of countries that export products with high methane emissions. “It’s being discussed already with methane and the trade of natural gas. If a country has gas that is leaking methane, they will pay tax at the border.”

Noticeably absent from the growing list of countries who have pledged to reduce emissions are leading methane emitters China, India and Russia.

Countries that have signed on “will put increasing pressure on the outliers, specifically India, Russia and China,” Zaelke said. “They are getting a very strong signal now that they will have to do more to stay in the global economic system because of the inevitable border tax adjustments.” 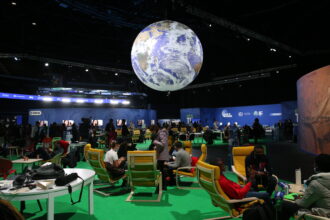 Glasgow Climate Talks Are, in Many Ways, ‘Harder Than Paris’ 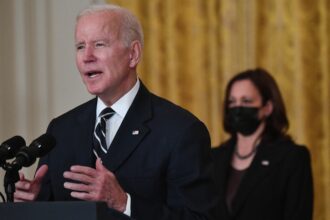