WASHINGTON—When describing Sen. Jeff Bingaman, observers on Capitol Hill are quick to utter such accolades as considerate, thoughtful and practical.

The lanky and cerebral New Mexico Democrat’s pragmatism is now under the political microscope of the nation’s capital as he warms up to the idea of crafting a clean energy standard that the business world can embrace and the green movement won’t shun.

Plus, with a GOP-heavy 112th Congress, the chairman of the Senate Energy and Natural Resources Committee knows he has to engage in new math. With 12 Democrats and 10 Republicans serving on his own rearranged committee, he first has to win a majority there before any measure can advance to a Senate where the Democratic caucus has just a 53 to 47 edge.

Bingaman’s Wednesday afternoon meeting in the Oval Office sends a signal that President Obama is counting on the senator’s savvy.

“It is quite clear to me that the president expects energy policy to have a major place on this Congress’s agenda,” Bingaman told reporters via e-mail after the White House meeting that came just a week after a State of the Union address, where Obama called for utilities to garner 80 percent of their electricity from sources such as solar, wind, natural gas, nuclear and so-called clean coal by 2035.

“Both the president and I agreed that Congress has a real opportunity to work together on bipartisan legislation to advance our energy and economic security,” he wrote.

Joshua Freed, director of the clean energy program at Third Way, recently co-authored a white paper promoting a clean energy standard as a solution for weaning the country off such high reliance on fossil fuels and boosting green technologies on the homefront.

For Third Way, a think tank that advances moderate policy ideas, the Senate and not the Republican House, is the chamber to initiate a clean energy standard. And Bingaman is an ambassador delivered by central casting.

“He’s exactly the person to move this type of idea,” Freed told SolveClimate News in an interview. “He listens, he understands how to build a consensus, he knows the members of Congress and what their needs are, and he’s focused on the long term of this ambitious but achievable goal.”

Defining Clean: Is a CES a Sellout?

The idea of creating a clean energy standard (CES) that adds nuclear, natural gas or coal with carbon capture and storage to the renewables mix makes environmental organizations like the Sierra Club, the League of Conservation Voters and Environment America cringe. They are longtime proponents of legislation that is more along the lines of covering wind, solar, ocean tides, geothermal, biomass, landfill gas, hydrokinetic, waste-to-energy and new hydropower at existing dams.

Marchant Wentworth, deputy legislative director for the climate and energy program at the Union of Concerned Scientists, understands why some conservationists are uncomfortable with this new direction. However, his organization is remaining open-minded.

“No, I don’t think Bingaman has lost his mind,” Wentworth said in an interview with SolveClimate News. “He’s a pretty considerate guy.”

“We will not oppose such a standard,” he continued. “But I don’t know if we are at the point where we can say we’re supportive. We don’t know what it is yet.”

Neither Freed nor Wentworth want a national CES to override what 27 states and the District of Columbia have accomplished thus far by scripting their own mandatory renewable portfolio standards. Most of those states are in the Northeast, Midwest and far West.

In fashioning an 11-page document about a CES, Freed said he took special pains to address the valid concerns of environmentalists.

“I don’t want to appease them, I want to engage them,” he said about appealing to green groups. “Yes, the drive to clean energy has moved forward over the last two years. But we need to make that much bigger. We need to score bigger legislative victories to get that done.

Barely five months ago, Bingaman stood with outgoing Sen. Sam Brownback (R-Kan.), now governor of Kansas, to introduce a bipartisan bill geared at encouraging growth in the wind, solar and other renewables via an all-encompassing renewable electricity standard.

The Renewable Electricity Promotion Act of 2010 would have required utilities to deliver 15 percent of their power from renewables or by ramping up energy efficiency by 2021.

Fast-forward to Monday, Jan. 31, when Bingaman appeared at the National Press Club at the invitation of the New Democratic Network, a center-left think tank and advocacy organization.

“My own view is that if we can develop a workable clean energy standard that actually continues to provide an incentive for renewable energy projects to move forward and can provide an additional incentive for some of the other clean energy technologies, nuclear being one, I would like to see that happen,” Bingaman told his audience. “I’m approaching the issue with a willingness to work on trying to come up with a way to achieve what the president set out.”

“Obviously, there are a lot details to work out,” he continued. “I am pleased that the administration has reached out to the committee to consult on this subject.”

Devil in Those Details

There is no question that a CES is fraught with political risk, Wentworth said, before ticking off a list of three requirements that are non-negotiable to pass muster with his organization.

First, the entire environmental community would unite and rebel if the measure were paired with legislation to roll back the Environmental Protection Agency’s authority under the Clean Air Act to regulate heat-trapping gases. Republican senators, such as Lindsey Graham of South Carolina and Lisa Murkowski of Alaska, the ranking member of Bingaman’s committee, have been exploring such an opportunity, Wentworth said.

Second, the requirement for traditional renewables has to be high enough to push significant growth and jobs in the sector. For instance, mandating utilities to produce at least 25 percent of their electricity from wind and solar by 2025 would be a reasonable starting point, he said.

And third, loopholes lingering from past legislative measures need to be closed. These could include making rural electric cooperatives and municipal utilities comply with standards now mainly required only of investor-owned power companies and figuring out how to distribute credit among the complex layers of new and existing nuclear power, hydropower and natural gas.

“What you have to realize is that in the crass world of K Street, there are winners and losers in this,” Wentworth said. “What matters is who has the pen and who is writing (the legislation). Everybody wants a slice of it.”

Freed pointed out how crucial it is for a CES to attract businesses by including financial incentives to encourage early adoption of new technologies. For instance, he added, increased access to credit could be a boon for next generation solar; small and modular nuclear reactors; and batteries geared for large-scale energy storage.

No doubt, states with plenty of wind, sun or geothermal resources need to continue to maximize those natural resources, he said. An expanded CES would allow regions of the country that have shied away from more stringent renewable energy standards — such as the Southeast — to be rewarded for lowering shedding their dependence on carbon-intense fuels.

In their report, Freed and Third Way colleague Sam Hodas expressed concern that traditional renewables don’t have enough oomph to pull the country out of its energy hole.

For example, their arithmetic shows that boosting renewable energy capacity to 17 percent would require installing 162,000 megawatts of power — a six-fold increase from existing capacity. That calls for investing billions in new transmission lines that take decades to build.

And that, they continued, seems precarious when population growth and a return to economic prosperity are expected to increase electricity demand by at least 20 percent from 2007 levels by 2030. That would require 220 gigawatts of new power — the equivalent of about 440 coal fired power plants or 484 wind farms the size of the Cape Wind project off the Massachusetts coast.

On the current course, they wrote, conventional coal will provide a huge portion of this power, which produces close to half of U.S. electricity today.

When Freed and Hodas broached their CES white paper, both were seeking energy reform that could weather a contentious political climate where cap and trade was dead and a nationwide renewable electricity standard was on life support.

“We thought this was the only way we could even have a serious debate about energy policy,” Freed said. “Before, we’d been engaged in a conversation about whether the word climate should be included in this debate. We needed to move beyond that. Instead of hewing to ideological purity, we need to rally behind goals that we can rally behind and achieve.”

A thoughtful CES can be palatable to Democrats with an environmental bent, as well as Republicans fretting about ceding entrepreneurial ground to India, China and Brazil, he said, if themes such as energy independence and American leadership in the global marketplace are highlighted.

“They should be able to get behind it,” he emphasized. “We need to create a platform for them to stand on and really champion this.”

Burr and Murkowski are two of the 10 Republicans on Bingaman’s reconfigured energy committee, which Senate leaders made final last week. The other eight GOP members are Sens. John Barrasso of Wyoming, Jim Risch of Idaho, Mike Lee of Utah, Rand Paul of Kentucky, Dan Coats of Indiana, Rob Portman of Ohio, John Hoeven of North Dakota and Bob Corker of Tennessee.

Last year, Murkowski backed an energy bill with a renewable electricity standard but she hasn’t yet weighed in on the CES. And, before he walked away from climate change negotiations in 2010, Graham turned heads by talking about requiring utilities to strive for bold clean energy targets of 25 percent by 2025 and 50 percent by 2050.

Now, Graham is once again making noise about resuscitating some type of CES. And Democratic senators, including Mark Begich of Alaska, Amy Klobuchar of Minnesota and Tom Carper of Delaware, are also interested in pursuing bipartisan measures.

“We’re not willing to wait two, three, four or more years to address this issue,” Freed said. “Whether it’s from an environmental perspective or from an economic and competitive perspective, if nothing happens in the United States we’ll be left in the dust.” 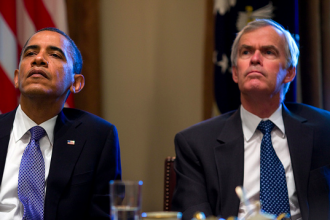