This year’s melting continues a steady, decades-long decline in Arctic sea ice, which has accelerated in the 21st century in concert with the surge in carbon dioxide emissions. Satellite measurements, taken since 1979, showed sea ice plummeting to its lowest extent in 2002. That began a string of record or near-record lows, and since then the summer ice extent has never again come close to the long-term (1979-2000) average.

Arctic sea ice is also getting much thinner. This spring, new data from the European Space Agency’s CryoSat 2 satellite shows the ice cover stretching across the Arctic Ocean is, on average, 15 percent thinner than it was last year at the same time. Thinner ice is more easily broken by wind and waves and melts more quickly, intensifying concerns about a potential new record low this year.

The measurements are critical for assessing the progress of climate change because Arctic ice pack is a vital climate regulator. The icy white shield reflects the sun’s heat back into space, and as the ice cover diminishes, the much darker ocean surface absorbs more heat. Research shows that this shifts the jet stream, leading to more extreme droughts and rainfall events in the northern hemisphere. The declining sea ice is also diminishing populations of polar bears—which depend on the ice as a base to hunt and breed—as well as walruses, ice-dependent seals and sea birds that hunt along cracks in the ice.

The new five-year data set from the CryoSat 2 offers much more detail on the thickness of the ice—an important figure to add to the equation for calculating total sea ice volume, said Stefan Hendricks, who studies sea ice physics at the Alfred Wegener Institute, a polar and marine research institution In Germany. CryoSat 2 also fills in data gaps from around the North Pole and north of Greenland, where much of the thickest ice remains.

Most previous satellite measurements focused on ice extent. Thickness data were not nearly at as high a resolution as provided by CryoSat 2, Hendricks said, adding that the five years of CryoSat readings shows “quite the variability in thickness from year to year.”

“The current ice conditions are similar to the spring of 2012,” said Marcel Nicolaus, also a sea ice physicist at the Alfred Wegener Institute. “In some places, the ice is even thinner,” he said, adding that the seasonal fate of the ice will depend on Arctic weather patterns over the next few months. Nicolaus and other climate researchers presented the ice forecast at the European Geosciences Union annual conference in Vienna, Austria in late April.

Nicolaus also discussed the CryoSat data showing that much of the remaining thick, multiyear sea ice is positioned where it will be pushed southward and melt. Once those thicker slabs are gone, there’s nothing to prevent the remaining sheets of thinner ice from drifting south and melting, he said.

Sea ice growth was slowed this winter by exceptionally warm temperatures—up to 29 degrees Fahrenheit above normal across parts of the Arctic. Many areas that are usually thick with blocks of old ice in the winter months, such as the Beaufort Gyre off the coast of Alaska, had only sparse cover this year. The result was the lowest sea ice maximum ever recorded in the winter, escalating concerns of dramatic warming in the region.

Scientists at the National Sea Ice and Data Center also reported unusually thin ice in some sectors of the Arctic this spring.

“Our U.S. colleagues are currently reporting thickness measurements of less than one meter [3.2 feet] in the Beaufort Sea, north of Alaska. Such ice will not survive the summer sun for long,” said Hendricks. “The transpolar drift stream, a well-known current in the Arctic Ocean, will be carrying the majority of the ice through the Fram Strait to the North Atlantic. These thick ice floes will eventually be followed by thin ice, which melts faster in the summer.”

NSIDC director Mark Serreze said his organization’s researchers have identified a weak long-term climate trend that hastens ice loss: More frequent and persistent strong high pressure systems over the Central Arctic and Beaufort Sea are driving winds that push more ice out of the Arctic through the Fram Strait.

“We know this past winter has been absurdly warm in the Arctic. I’ve never seen anything like this year,” said Serreze, who has been studying Arctic ice and climate conditions since the early 1980s. “Seasonal projections are very difficult, but I think there are some good indicators out there that it could be one hell of a summer in terms of summer ice loss.”

A cold summer could help Arctic sea ice recover, which happened in 2013, when CryoSat data found that cool conditions actually increased sea ice volume by 41 percent. Those findings, published in 2015 in the journal Nature Geoscience, showed how sensitive the Arctic sea ice is to summer weather patterns.

“While we have good complete observations of the area coverage over the past 35-plus years, thickness data coverage is much spottier,” Meier said in an email. He explained that researchers have been piecing together trends for thickness and volume from a variety of sources, including from submarines from the 1970s through the 1990s, as well as satellite altimeter data.

Measuring volume is important because it’s more directly linked to human-caused global warming than extent alone, which can change with wind patterns that may not be directly linked with heat-trapping greenhouse gases.

“These observations are enough to clearly show a substantial thinning of the ice, but it’s not a complete time series,” Meier said. NSIDC records include a long-term age distribution estimate showing how the amount of thick, old ice has decreased and young, thin ice has increased over time. “So this confirms a loss of thickness over time, but it isn’t a quantitative volume estimate,” he said.

“That also shows a thinning and loss of volume and, nicely, does provide quantitative numbers,” Meier said.

While the researchers continue to fine-tune their projections and calibrate data sets from various satellites, there’s no question about the long-term future. Without drastic and immediate cuts in greenhouse gas emissions, the Arctic will be ice-free for seven months of the year by 2100, according to the IPCC, which warns that the meltdown will not only affect the immediate region, but could fundamentally alter Atlantic Ocean currents, which regulate the climate across much of the northern hemisphere. 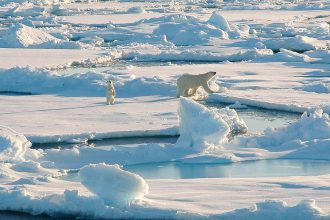