China and the United States, the two biggest emitters of the carbon pollution that has brought global warming to a crisis point, formally ratified the Paris climate agreement on Saturday. Their move propels the ambitious global pact toward its entry into force by the end of this year.

The leaders acted the day before a meeting in Hangzhou of the G20 group of international economic powerhouses. Those nations account for almost all current emissions, and must all act swiftly to strengthen their commitments if the Paris accord is to meet its objectives.

For the Paris agreement to take force early, 55 countries representing 55 percent of global CO2 emissions must ratify it. Together, China and the U.S. account for about 38 percent of emissions. According to the World Resources Institute, 24 other parties have already ratified, but together those parties only account for another 1 percent of emissions. The fastest way to hit the 55/55 goal would be for the European Union and a smattering of additional countries to sign on.

According to the United Nations, the pact’s early entry into force would have a “catalytic effect, spurring strong and decisive action” well before 2020. In particular, parties to the agreement would be bound by rules such as those governing “transparency,” the ability of nations to monitor each other’s compliance. A series of timetables would also kick in further tightening the Paris pledges.

“We’re leading by example,” Obama said in China. “As the world’s two largest economies and two largest emitters, our entrance into this agreement continues the momentum of Paris, and should give the rest of the world confidence—whether developed or developing countries—that a low-carbon future is where the world is heading.”

The United States has pledged to cut greenhouse gas emissions by up to 28 percent below its 2005 level in 2025.

China has said its emissions will peak no later than 2030, while it pares its economy’s emissions intensity, increases the use of renewables and embarks on aggressive reforestation.

China’s ratification occurred on Saturday morning at the close of a session of its People’s Congress, whose standing committee approved the agreement. Obama does not need the consent of the U.S. Senate to ratify this agreement, a legal point disputed by some Republicans. (Donald Trump has said he would block its implementation if elected.)

China, as host to the G20 meeting, has put climate change high on the summit’s agenda, with a focus on green finance, widely seen as the sine qua non for a successful outcome.

The G20 includes nations at various stages of development, with many competing agendas (nicely captured here by Carbon Brief).

The US-China event was timed to exert maximum pressure on the wider group. And Obama reflected the importance of finance, citing “a saying in America—that you need to put your money where your mouth is.”

Financial pledges are especially significant in bringing on board another big player, India.

In a joint statement with the United States on Sept. 1, India committed itself to the goal of putting the Paris pact in force “as soon as possible” and said it had “begun its processes to work towards this shared objective.” But it did not promise to ratify the accord this year.

Environmentalists, meanwhile, have been urging the G20’s members to commit themselves to phasing out subsidies for fossil fuels by the year 2020. That has been a goal of leading industrial nations and world financial institutions for years, but they are far from achieving it.

For more details and background, read: 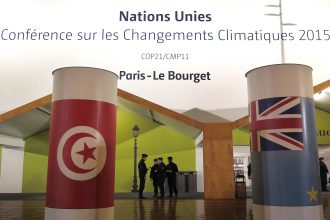