Researchers have developed a new method for determining the source of black carbon—a particularly nasty type of pollution that can blanket the Arctic—giving some hope that this known accelerator of climate change could be slowed.

Black carbon, the soot that darkens the sea ice, causing it to absorb heat from the sun instead of reflecting it, speeds up the rate at which the ice disappears. It’s yet another severe aspect of climate change—except that its lifespan is just days or weeks, as opposed to carbon dioxide’s, which can last a century or more. That means that finding its source and mitigating its effects can have an almost immediate impact, and might hold a key for helping slow the rapid melting of the Arctic.

A new study, released earlier this week in the Proceedings of the National Academy of Sciences, provides “a very powerful tool” in combating black carbon, said Scripps Institution of Oceanography atmospheric scientist Veerabhadran Ramanathan, who was not a part of the study.

“It’s a new tool for understanding who is emitting what and when,” he said. Black carbon can travel thousands of miles from where it is initially emitted, so finding the source of the pollution can make it more feasible for policymakers to attempt to stop it.

The authors of the study gathered two years of black carbon data from eastern Siberia—a remote, sparsely populated region—and developed the method for determining the source. By analyzing the isotopes of the black carbon samples, the authors determined that black carbon in the region was coming primarily from transportation and home heating with coal or biomass. The isotope analysis was then compared with data from observation-based models and inventories of known emissions of black carbon.

When they began the study, the authors had expected the biggest sources of black carbon would be gas flaring and power plants. “The results related to gas flaring were probably the biggest surprise,” said author Patrik Winiger, an applied environmental scientist at Stockholm University. Instead, they saw that vehicles and residential sources were the main offenders, often coming all of the way from China, elsewhere in Russia and Europe.

Winiger worked on the project from Sweden, while local technicians in Tiksi, Russia sent data at regular intervals. This coordination was a key element in the study, as bringing samples across borders can pose problems for traveling scientists, Winiger said.

Winiger and his colleagues analyzed the isotopes that made up each sample, each of which look different depending on the source.

“Given that we have precise isotopic fingerprints, we can tell you exactly how much carbon is coming from where,” Winiger said.

One of the most novel elements of the study is that the authors had data out of that region at all. Siberia makes up nearly half of the Arctic region, and yet it is rare to have observations and data from there.

Climate experts from the United Nations Environment Program and the World Meteorological Organization have determined that black carbon, a short-lived climate pollutant, is 100 to 2,000 times more potent in warming the atmosphere than carbon dioxide. As the new study’s authors show, the soot can travel long distances, landing in the Arctic and exacerbating an already dire climate situation there.

The Arctic is warming at twice the rate of the rest of the world and the past year in particular has been marked by record-breaking high temperatures and low levels of sea ice. As the sea ice melts, it exposes the dark ocean below. Instead of radiating some of the sun’s rays back into the atmosphere, the way the white surface of sea ice can, the ocean absorbs the sun’s heat, warming the planet more.

Black carbon adds a secondary element to that process. When the soot covers the ice, it darkens the surface, absorbing more heat from the sun. It also speeds up the melting of snow.

Though scientists agree any global mitigation efforts have to center on immediately and drastically lowering carbon dioxide emissions, those changes have been politically difficult, opposed by powerful forces and may not happen in time to save the Arctic. But at least theoretically, slowing black carbon could offer some hope. Knowing the source can help policymakers target their efforts more quickly and efficiently, if there’s political will for it.

The next step, the authors say, will be analyzing other parts of the world. Winiger is currently working on a similar project with samples from Alert, Canada, the northernmost station in the world. 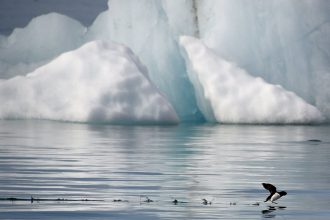 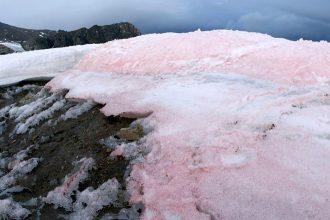